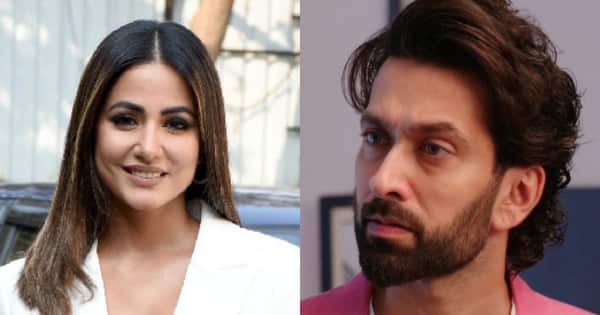 Hina Khan, Nakuul Mehta aka Ram from Bade Achhe Lagte Hain 2, Swaran Ghar, Imlie, Palak Tiwari, Kratika Sengar and more have made it to the TV Newsmakers of the day. Hina Khan’s outfit sketch from Cannes 2022 went viral on social media and grabbed headlines. Nakuul Mehta aka Ram’s fans got flak from the audience for glamourizing his anger. Swaran Ghar scene got trolled online by the netizens. Imlie aka Sumbul Touqeer Khan’s acting chops impresses the audience. Palak Tiwari opens up comparisons with her mother Shweta Tiwari and more. Let’s have a dekko at who, what and why made news in the TV world today. Also Read – Ankita Lokhande turns emotional while talking about long-distance relationship with Vicky Jain; says, ‘Mere paas mera pati hona chahiye’ [watch video]

The makers of Bade Achhe Lagte Hain 2 dropped of promo of Nakuul Mehta and Disha Parmar starrer TV show. In it, we will see Ram getting angry with Priya for hiding the truth of the kidnapping from him. Nakuul is a phenomenal actor. His angry avatar is a mixed reaction from the audience. Some find Ram’s angry avatar hot and other netizens asked the fandoms to stop glamourizing anger. Check out the whole story here. Also Read – Trending celeb pics of the day: Sohail Khan and Seema file divorce after 24 years of marriage; Katrina Kaif visits Priyanka Chopra’s restaurant in New York and more

Hina Khan is going to walk the red carpet at the Cannes Film Festival 2022 this year as well. She will be launching the poster for her film Blind. And if reports are anything to go by, a picture has been going viral on Twitter which is alleged to be Hina Khan’s dress sketch for Cannes 2022. Check out the report here. Also Read – Trending OTT News Today: RRR makers release exclusive trailer for Zee5, Urfi Javed wants Aly Goni in Netflix’s 365 days remake and more

In the upcoming episode of Imlie, Sumbul Touqeer Khan aka Imlie will get a rude shock from Narmada. Aryan’s mother will slam her for using Aryan to get ahead in life. Aryan is in the hospital and Imlie is as it is tensed and behind getting B negative blood for him. And in the middle of it, Narmada’s scathing words hurt her. Sumbul Touqeer Khan’s acting chops are winning hearts. Check out the reactions from the fans here.

Kratika Sengar and Nikitin Dheer welcomed a baby girl recently. The Kasam Tere Pyaar Ki actress took to her social media handle to reveal the name of their baby girl. Nikitin and Kratika have named her Devika. “We feel blessed to share with you the arrival of our darling daughter! -Dheers,” read the caption on Instagram. Check out the report here.

Swaran Ghar starring Sangeeta Ghosh and Ajay Chaudhary recently got flak from the audience. It featured a scene wherein Sangeeta’s character gets strangled by her dupatta which gets stuck in a fan. Netizens have brutally trolled the scene online. Check out the reactions to the Swaran Ghar scene here.

Yeh Rishta Kya Kehlata Hai actor Mohsin Khan and Anupamaa actress Aneri Vajani will be reuniting for a project. Mohsin and Aneri worked in Nisha Aur Uske Cousins a couple of years ago. Aneri shared some BTS pictures from the sets and fans are going gaga over the same. Check out the pictures here.

Guddan Tumse Na Ho Payega actress Kanika Mann is going to participate in Khatron Ke Khiladi 12 alongside Chetna Pande, Rubina Dilaik, Shivangi Joshi, Rajiv Adatia, Faisal Shaikh to name a few. Kanika Maan opened up on bagging the show saying, “I’ve always been a fan of Khatron Ke Khiladi and I know that my experience on the show will be a memorable one and that I’ll remember it for life. I’m particularly excited to work with Rohit sir and perform stunts under his guidance. And I’m hoping that through this show I’m not only able to face my fears head-on but also realise my strengths and get to know myself even better. Since I wouldn’t get to do any of the stuff I would on the show in my regular life, I promise to have lots of fun and keep everyone entertained.”

Palak opens up on comparisons with mother Shweta

Shweta Tiwari‘s daughter Palak Tiwari has entered into showbiz. The young belle is currently seen in music videos and is gearing up for her Bollywood debut. Recently, Palak opened up on comparisons with her mother. “Comparisons with mom are inevitable! In fact, I have grown up with these comparisons. I have heard comments like, ‘ Yeh aapke jitni sundar aur talented hogi kya?’ Since I look more like my father (actor Raja Chaudhary), I’d also hear comments like, ‘ Arre, yeh aap par nahi gayi’. I would punch my pillow dreading that my life was ruined because I didn’t resemble my mother (laughs!),” she told ETimes.

Gashmeer Mahajani plays Aditya Tripathi in Imlie before. He quit last year which was a shock for all the fans. He recently opened up on quitting Imlie. Gashmeer told Etimes, “Imlie is a good show and is doing well. The initial 200 episodes were shot like an OTT show and there was good content. However, I quit after a year because I felt I was struggling to keep my character going. Also, in the TV business, not just Imlie, shows tend to drag. It is natural for a maker to continue the story because they have invested in the show and only after 200 episodes does it start reaping benefits. But for an actor, if he wants to grow, he has to consider other options and move on.”

That’s all in the TV news today.