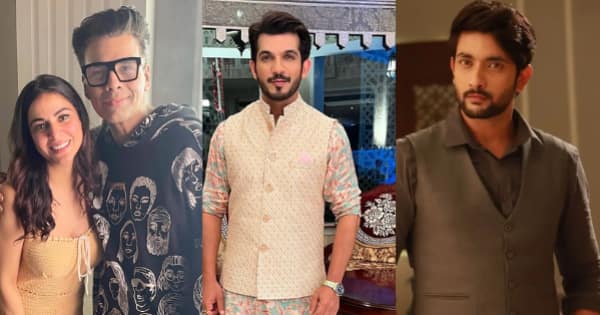 Shraddha and Arjun in Karan Johar’s next

Kundali Bhagya actress Shraddha Arya and Khatron Ke Khiladi 11 winner Arjun Bijlani have bagged a project with Karan Johar. Yes, you read that right. The two of the popular TV stars took to their social media handles and shared pictures with Karan Johar and expressed their excitement. Karan, too, warmly welcomed them aboard for Dharma Productions’ next. Check out the same here.

Kanika Mann is currently seen in Khatron Ke Khiladi 12. The actress recently opened up on if she is ready to take up Bigg Boss 16. Kanika seemed very enthusiastic about it. Kanika revealed that whilst on the sets of Khatron Ke Khiladi 12, she would hear a lot of stories about Bigg Boss, since there are a lot of contestants who were a part of Salman Khan’s show. Here’s what she said about participating in Bigg Boss 16.

Nakuul Mehta and Disha Parmar starrer TV show, Bade Achhe Lagte Hain 2, is reportedly going off-air. For the longest time, in fact, ever since the show began, the TV show hasn’t been able to rake in TRPs. It has been struggling to even to 1.0 ratings. And now, a report in TellyChakkar states that Bade Achhe Lagte Hain 2 is going off air, next month. BollywoodLife.com had earlier informed y’all that the production house gave the team three months duration to buckle up.

Paras Kalnawat, who was ousted from Anupamaa, recently has signed up for Jhalak Dikhhla Jaa 10 which is a dance-based reality TV show. He shared his excitement about taking up JDJ10. He has been trained at Terence Lewis Dance Academy. Paras knows the basics of contemporary, Jazz and Latin. He is ready to take up more challenges on the show.

Fahmaan Khan is currently ruling hearts as Aryan Singh Rathore in Imlie. Fahmaan’s popularity increased considerably after he took up Imlie. Recently, he took to his social media handle and dropped a video slamming all the toxic fandoms who have been trolling and abusing his co-stars due to their fandom battles. Fahmaan threatened to report and ban their accounts permanently. Fahmaan Khan asked them to spread positivity and love only. Check out his post here:

Sagar Parekh is the new Samar in Anupamaa

Since Paras Kalnawat’s contract was terminated the makers started looking for new actor in place of Samar in Rupali Ganguly’s Anupamaa. There were reports of Suvansh Dhar has been approached to play Samar. Later it was said that Kaisi Yeh Yaariyaan actor Sagar Parekh has been approached for Anupamaa. And now, the latest development states that Sagar has been finalised as the new Samar in Anupamaa.

That’s all in the TV Newsmakers today.