Skip to content
HomeEntertainment‘Vikram Vedha’ review: Hrithik Roshan shines in a thriller that never excels to its full potential 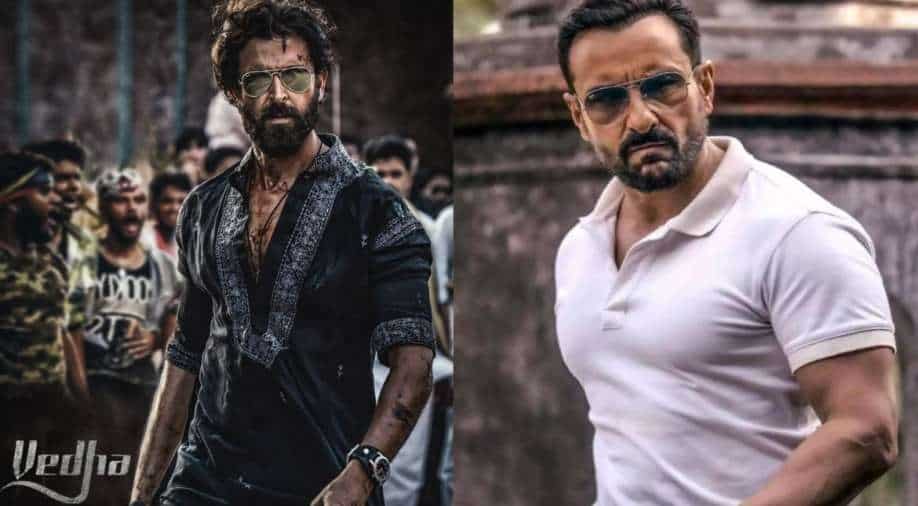 It’s not easy to be a part of a remake of a hit film. Comparisons are natural and it is difficult to surpass the originals by all quarters. Director duo Pushkar-Gayatri make their Bollywood debut with a remake of their Tamil hit film ‘Vikram Vedha’. The trailer of the film had the internet buzzing as it presented Hrithik Roshan in a scruffy avatar full of swagger. The film too uses Roshan’s larger-than-life persona to the fullest to tell a story where the audience has to decide – what is good and what is bad.

The story is loosely based on the popular folktale of Betal Pachisi, which was about a king called Vikramaditya and a ghoul called Betal. In Pushkar Gayatri’s film, who also have written the story, Vikram (Saif Ali Khan) is an encounter specialist in Lucknow Police Special Task Force who along with his team is given the task to nab dreaded gangster Vedha Betal (Hrithik Roshan) who’s been underground for a while. While the cops are still figuring out how to nab Vedha based on a recent tip-off, the gangster himself walks into the police station to surrender himself. During his subsequent interrogation, Vedha narrates a story to Vikram which can completely change his concept of good and evil.

Based on the premise of the original 2017 Tamil film, the Hindi adaptation has similar lines and scenes but it also cashes in on Roshan’s superstardom and inherent swagger. Roshan’s Vedha is supposed to be a scruffy unkempt man who only understands the language of guns. but he is also a gangster in a Bollywood film, whose grey beard and unruly curls have been carefully and tastefully created to give the character a super stylish look.

Giving him company is a very muscular Saif Ali Khan who because of his strikingly different character, the no-nonsense cop Vikram, looks clean and lean in his collared T-shirts and jeans.

Once you get over the lead pairs’ carefully curated looks, the two actors manage to shine with their performances. Hrithik’s role is far more fleshed out than Saif and the actor does not disappoint. He may be all too aware of his swag on screen but Roshan also sinks his teeth into making Vedha a very contrived personality who may be on the wrong side of the law but yet is a do-gooder.

Saif, on the other hand is restrained in his portrayal of Vikram the cop. He does get the quirky lines, and the sly humour that exists in the narrative throughout but writers…. seem to concentrate more on fleshing out Vedha’s role than Vikram’s. Nevertheless, Saif delivers a credible act and the scenes rather than the standoffs between Vikram and Vedha are superbly executed- both at writing as well as performance level.

The other actors – Radhika Apte as Vikram’s righteous wife and Vedha’s lawyer, Rohit Sharaf as Vedha’s brother Shatak and Yogita Bihani as Chanda, Shatak’s girlfriend are just enablers to the story of Vikram and Vedha who both loathe each other but are also dependent on each other to unravel a few mysteries in life.

The story, intricately written and non-linear in nature, demands your attention as a lot of minute details are part of the screenplay. With three solid backstories that form the core of the plot, ‘Vikram Vedha’ takes time to establish. I would still say that the first half is far pacier than the second half even though a lot more is unraveled during this point in the film. At some point, the narrative tends to slacken even and an unnecessary song to showcase Hrithik’s dancing prowess seems forced to the narrative.

There are a few stereotypes too, of course. The Muslim good cop/best friend is the first to fall. He uses Urdu words nonchalantly to justify his community. The Lucknow-Kanpur slangs are used too but the accents are inconsistent for both Hrithik and Saif.

The film is a glossy Hindi remake of a film that boasted of not just a great story but superb performances by R Madhavan and Vijay Sethupathi. The Hindi remake is quite right there – with the same story, director and credible performances by its lead but somehow left a middling effect on me.

Make no mistake, Hrithik is superb, Saif holds his own and the story ensures that two actors get to perform their best but the film does not stay with you for too long and never elevates to its full potential.

‘Vikram Vedha’ is in cinemas from September 30.