Skip to content
HomeEntertainmentVikram Vedha: Sharib Hashmi on working with Hrithik Roshan; ‘He is very reserved, but left me surprised'[Exclusive] 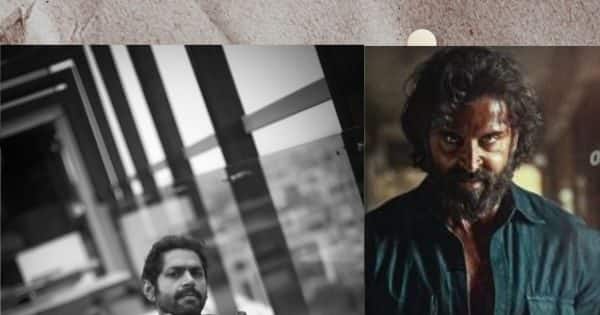 There is a lot of anticipation going around Vikram Vedha film because of the stellar cast that includes Sharib Hashmi, Hrithik Roshan and Saif Ali Khan. The Family Man actor is all set to charm his fans with Vikram Vedha. He knows to take any role to a new level with his preparation and efforts. While the movie is highly talked about on social media because of the stellar cast, we got an opportunity to talk to Sharib and ask him about his experience of working in Vikram Vedha. Also Read – Vikram Vedha: Hrithik Roshan and Saif Ali Khan’s transformation into a dreaded gangster and tough cop will leave you awestruck [View Pics and Videos]

During an exclusive interview with Bollywood Life, the talented actor opened up about his experience of working with Hrithik Roshan. “I was very happy. He’s a little reserved during the shoot and he’s in himself. I didn’t have much interaction. He has always been very supportive during the shoot. When we had a packup he came and told me that he liked working with me. He did not have to say the same as he is Hrithik Roshan. For me, it was a big thing. He’s a very chilled person and doesn’t have an attitude. He’s very sweet”, he said. Also Read – Brahmastra box office collection: Ranbir Kapoor-Alia Bhatt starrer saves Bollywood; here’s how Vikram Vedha, Ram Setu and other BIGGIES will benefit

Original Vikram Vedha was a cult classic. The original film featured R Madhavan and Vijay Sethupati. When asked if people would be comparing it to the original; the actor quipped, “This is not the first time a remake is been made. In the past, many films which have been remade have done extremely well at the box office. Kabir Singh, Wanted, Singham, Dabangg; are all remakes. I think if the film is well made, people forget that it is a remake of any film or it is an original film. As long as they are enjoying it and they know it is a well-made film, the heart of the film is in the right place then it does not matter if it is a remake or not”.

The actor rose to fame because of his character JK who is Srikant Tiwari’s bestie in The Family Man. When asked about whether The Family Man changed his career and got him flooded with roles he said, “I owe a lot to Family Man and I can’t thank Raj & DK, Mukesh Chhabra for giving me JK. It changed a lot for me. I reached the aam janta. Only a section of the audience knew me. I became a household name with the same”.

Talking about Vikram Vedha the movie is set to release on September 30, 2022 globally and has been directed by Pushkar-Gayatri.