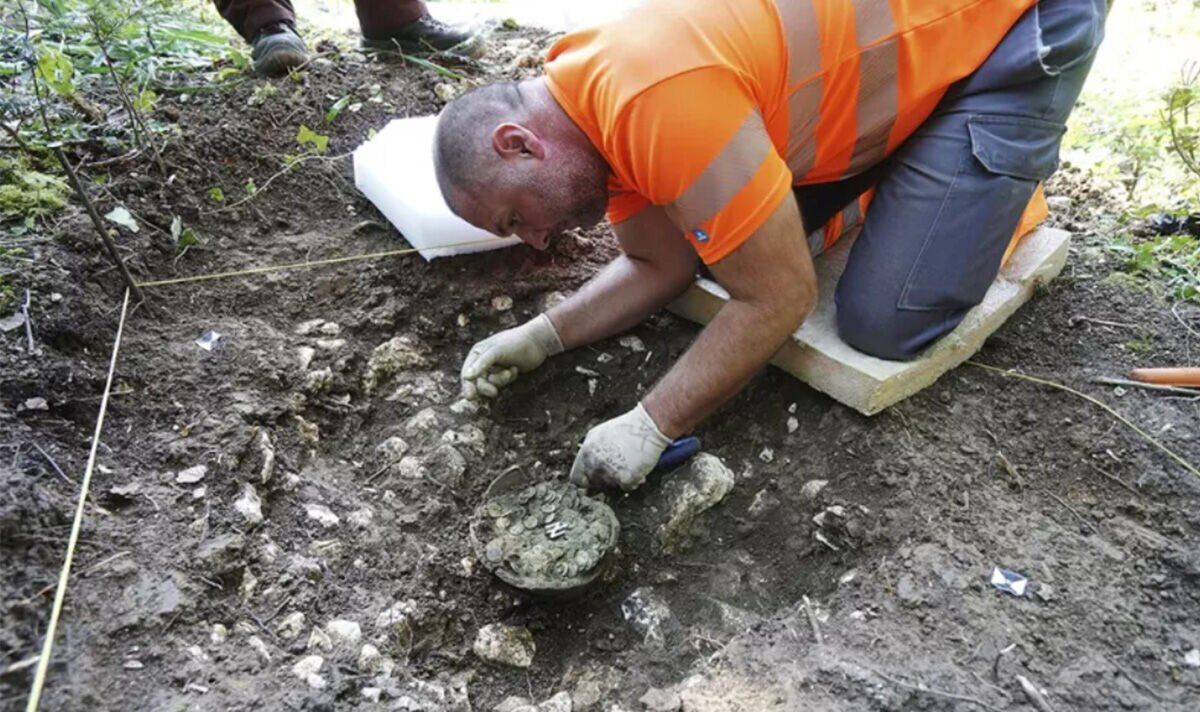 Daniel Lüdin, armed with only a metal detector, located the stash not too far from the 13th-century Wildenstein Castle in Bubendorf, Switzerland. After his device started beeping, Mr Lüdin started digging and soon came across several fragments of pottery and loose coins. Knowing that he may have stumbled across something big, the rookie carefully reburied the find and told Archäologie Baselland of his discovery.

That decision helped preserve important clues about the discovery which dates back to about 330AD.

Experts were able to carefully excavate the pot and perform a CT scan on its contents without disturbing them.

They found a nine-inch-tall pot filled with a large amount of small change” – coins made of a copper alloy and a small percentage of silver.

The 1,290 coins are worth as much as a solidus, according to the experts.

This was a pure gold coin introduced by Emperor Constantine during the late Roman Empire valued at around two months’ salary for a soldier.

Inside the pot was also an odd divider, made of cowhide, that left the researchers baffled.

Reto Marti, head of the archaeological department of the canton of Basel-Landschaft, said: “It was clearly used as a separation.

“But why the coins are separated in two parts we cannot tell for the moment.

“There are two types of coins in the pot, but the exact denomination of these late antique bronze coins is not known.”

“It will give a very detailed insight into the use of money and the circulation of coins in the time of the Roman emperor Constantine the Great.”

“Maybe it was an offering to the gods.”

Marjanko Pilekić, a numismatist and research assistant at the Coin Cabinet of the Schloss Friedenstein Gotha Foundation in Germany, said the find was a “stroke of luck”.

He said: “A stroke of luck is certainly also the survival of the storage vessel, which contained not only coins but also a piece of leather, organic material that rarely survives.”