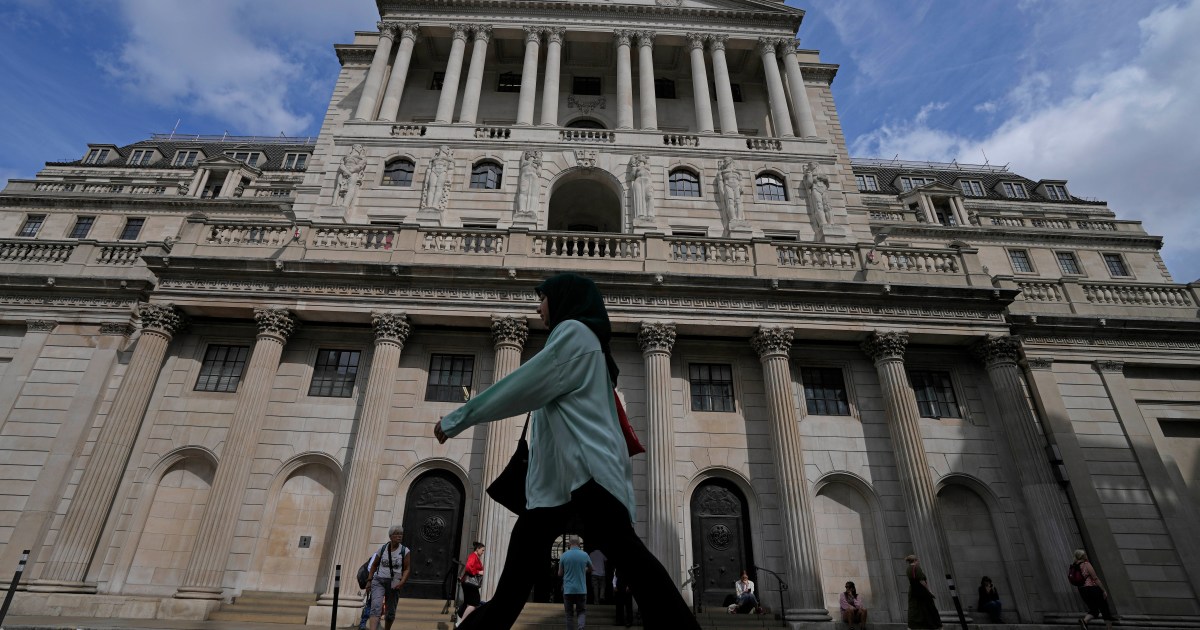 UK’s central bank hikes key interest rate to 1.75 percent, its highest level since 2008, and warns of recession ahead.

The United Kingdom’s central bank has made its biggest increase to interest rates in 27 years in a bid to smother soaring inflation and warned the country faces a long recession ahead.

Reeling from a surge in energy prices caused by Russia’s invasion of Ukraine, the Bank of England’s (BOE) Monetary Policy Committee voted 8-1 on Thursday for a half percentage point rise in its key interest rate to 1.75 percent.

The rate is now at its highest level since the depths of the global financial crisis in December 2008.

The BOE predicted that inflation will reach in excess of 13 percent in the final three months of the year – its highest level for 42 years – and remain “very elevated” for much of 2023.

It also warned that the UK was facing a recession with a peak-to-trough fall in output of 2.1 percent, similar to a slump in the 1990s but far less than the hit from the COVID-19 pandemic and the downturn caused by the global financial crisis.

The economy will begin to shrink in the final quarter of 2022 and contract throughout all of 2023, the bank predicted, making it the longest recession since the 2008 downturn.

The BOE has been criticised for moving too slowly to combat inflation, which accelerated to a 40-year high of 9.4 percent in June and has driven a cost-of-living crisis. While the central bank has approved five consecutive interest rate increases since December, none before Thursday exceeded a quarter percentage point.

By contrast, the United States Federal Reserve increased its key rate by three-quarters of a point in each of the past two months to a range of 2.25 percent to 2.5 percent. The European Central Bank’s first increase in 11 years was a larger-than-expected half-point rise last month.

The UK economy is likely to expand just 0.5 percent next year, the slowest growth rate among the world’s advanced economies, the IMF said.

UK ‘behind the curve’

“There’s also no surprise about how serious this situation is – the UK has been warned by investors, bankers and traders that it is behind the curve in dealing with this crisis with inflation,” Simmons said.

“Perhaps just as disturbing is … that the BOE has declared that there will be a period of recession ahead, for five consecutive quarters – more than a year,” he added.

Simmons said the ominous predictions had “sent a shudder” through the City of London, the UK’s financial hub.

“The IMF had warned ahead of all this that the UK was in one of the worst positions in Europe and was looking as if it was heading towards recession, now we have the fatal confirmation of that and a situation ahead where inflation will be rampant,” he added, citing predictions from some analysts that the rate of inflation could rise to as high as 15 percent by early 2023.

BOE Governor Andrew Bailey told reporters at a news conference that returning UK inflation to a 2 percent target was an absolute priority, and said all options were on the table at future policy meetings.