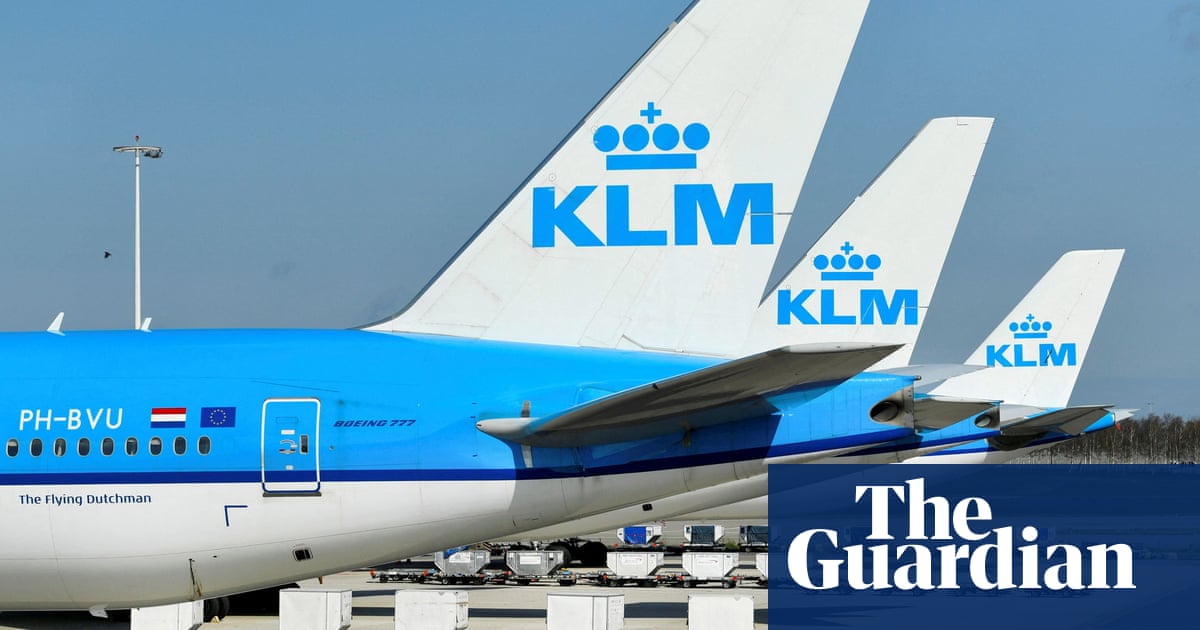 Environmental campaigners are suing the Dutch airline KLM over “greenwashing” adverts they say misleadingly promote the sustainability of flying.

Lawyers from ClientEarth are supporting Fossielvrij NL, a Netherlands-based campaign group, to bring a claim that KLM’s ad campaigns give a false impression of the sustainability of its flights and its plans to address its impact on the climate.

“KLM’s marketing misleads consumers into believing that its flights won’t worsen the climate emergency. But this is a myth,” said Hiske Arts, a campaigner at Fossielvrij NL.

“Unchecked flying is one of the fastest ways to heat up the planet. Customers need to be informed and protected from claims that suggest otherwise.”

Activists from Fossielvrij NL submitted a pre-action letter to Air France KLM, KLM’s parent company, during its AGM in Paris on Tuesday. Their legal action takes aim at KLM’s “Fly Responsibly” campaign, which presents the airline as “creating a more sustainable future”.

KLM’s campaign says it is on track to reach net zero carbon emissions by 2050, and that it plans to introduce hydrogen and electric planes and scale up the use of synthetic kerosene from 2035.

The litigants claim KLM is violating European consumer law by misleading customers, , as they say the aviation sector cannot reach net zero without limiting the overall number of flights.

Johnny White, a ClientEarth lawyer, said: “While climate experts warn we need to reduce air traffic to keep a just and livable world within reach, KLM and the airline industry are … lobbying intensively against climate regulation.

“It’s now or never for climate action. Airlines cannot be allowed to compete for business on claims that they are tackling the climate crisis, when the reality is they are fuelling it.

“Just as the fossil fuel industry is using greenwashing to protect their licence to operate, the aviation sector is using misleading advertising to protect its licence to grow. We need legislation to finally put an end to these delaying tactics for good.”

KLM received a rap on the knuckles over a separate marketing campaign using the line “Be a hero, fly CO2 zero” last month from the Dutch advertising regulator. The regulator found that although the carbon credits bought by KLM for the scheme resulted in some offsetting of emissions, it was not “adequate” for the airline to claim carbon neutrality.

According to Bloomberg, the slogan was judged by the watchdog to be an absolute claim, but the airline was unable to prove the statement. Air France KLM declined to comment on reports at the time.

Just 1% of the world’s population cause 50% of all commercial aviation emissions. “Flying is not only one of the most climate-damaging products people can buy, it’s also uniquely unequal,” Arts said.

“It is unjust that a small group of frequent flyers continue to fuel climate breakdown, when it is the people with less money, people in the global south and future generations that stand to suffer the most as the world gets dangerously hotter.”

A KLM spokeswoman told the Guardian: “We have received a letter of ClientEarth and will study its contents.”