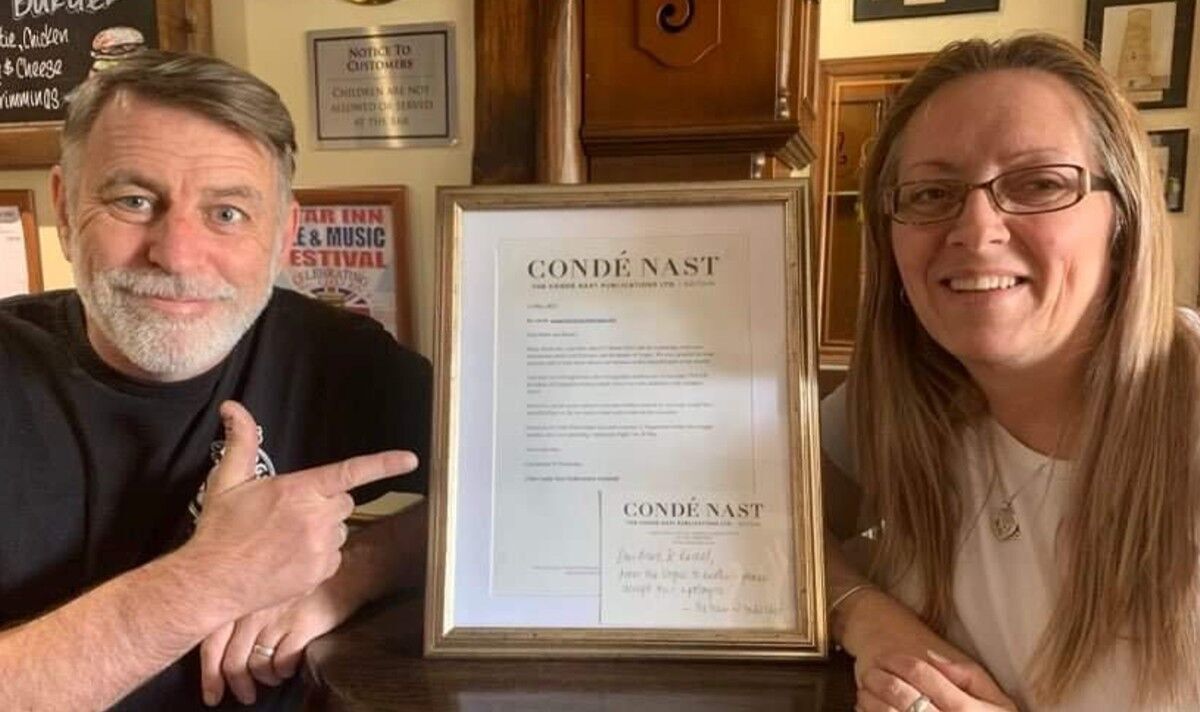 Condé Nast, the publisher of Vogue, sent The Star Inn at Vogue a cease and desist letter, calling on the business to change its name. But the historic watering hole in the hamlet of St Day is over two centuries old, with the village of Vogue, where the pub trades, outdating even that.

Mark Graham, the landlord of the Truro pub, has now received a signed and framed apology from Vogue’s legal department after batting away the threats from the New York publisher.

Mr Graham, 60, has run the business alongside his wife Rachel for nearly twenty years and took it upon himself to set the record straight by sending a reply back to Condé Nast.

But Mr Graham described how the media attention around the case “just took off” as the pub’s story circulated on social media.

He told Cornwall Live: “It’s been from everywhere. I’ve had calls from Australia, America, Germany, Holland.

“I thought it was just a nice little story which might be of interest to a few people.

He even used global superstar Madonna in his putdown, penned from the “real Vogue” village in Cornwall.

Replying to the threat of legal action against his pub from the publisher, he wrote back: “Whilst I found your letter interesting on the one hand, I also found it hilariously funny.

“I presume your magazine bases its name on the dictionary term for being in fashion which is uncapitalised as used in the Oxford English Dictionary.

“If a member of your staff had taken the time to investigate they would have discovered that our company, the Star Inn, is in the small village of Vogue, near St Day, Cornwall.

“Yes, that’s right, Vogue is the name of our village, which has been in existence for hundreds of years and in fact is a Cornish word, not English.

“I note in your letter that you have only been in existence since 1916 and I presume that at the time when you chose the name Vogue in the capitalised version you didn’t seek permission from the villagers of the real Vogue.

“I also presume that Madonna did not seek your permission to use the word Vogue (again the capitalised version) for her 1990s song of the same name.

“You are both at liberty to use the uncapitalised version without our permission. As a side note she didn’t seek our permission either.”

Rounding off his reply, he said: “In answer to your question whether we would change our name, it is a categorical NO.”

Christopher P Donnellan, from Condé Nast’s legal team, responded to Mr Graham’s letter, saying: “Many thanks for your letter dated March 15, 2022 and for responding with more information about your business and the hamlet of Vogue.

“We were grateful for your response and to learn more about your business in this beautiful part of our country.

“I am sure you will appreciate why we regularly monitor use of the name Vogue, including at Companies House (which is how we were alerted to your company name).

“However, you are quite correct to note that further research by our team would have identified that we did not need to send such a letter on this occasion.”

The lawyer then extended his “best wishes for a happy summer” from everyone at both Vogue and Condé Nast.