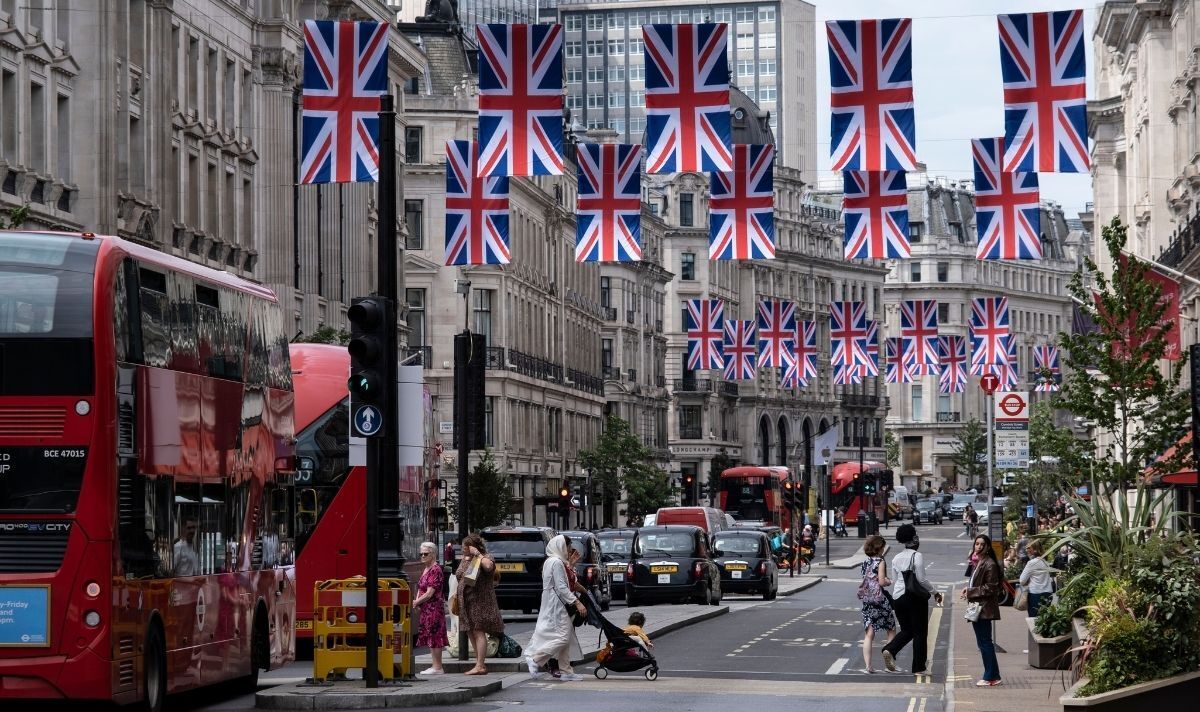 The flags have been displayed in a number of locations throughout the country to celebrate the historic milestone on June 2. But a furious row has broken out on Twitter after Femi Oluwole launched a furious attack on the Union Flags on Regent Street. The prominent Remainer said that while there is nothing wrong with flag decorations, it represents “blatant fascism”.

He posted screengrabs of headlines from several reports, including from Sky News which said: “Race report commissioned by Government an attempt to normalise ‘white supremacy’, UN human rights experts claim.

He wrote: “People are getting the wrong end of the stick about all the flags on Regent Street.

“There’s nothing wrong with flag decorations, no matter how ‘excessive’.

“The issue is what the flag represents.

“Right now, it represents blatant fascism. It’s our job to fix that.”

But this sparked a furious reaction from Nile Gardiner, a foreign policy analyst who was an aide to former Prime Minister Margaret Thatcher.

In a furious response, he hit back: “Disgraceful comments.

“A stupid insult to the Union Jack and everything it represents for a truly great nation that has given so much to the world.”

He wrote alongside this: “The Tories have a controlling majority in Parliament despite having a minority of the vote.

“Their main policy is built on the idea that our one country is more powerful than 27 combined.

“The UN says they seek to normalise white supremacy.

Dr Shola Mos-Shogbamimu, a lawyer, political and women’s rights activist, also hit out over the Union flag, claiming the issue is the “veil of legitimacy it bestows on White Nationalism”.

She tweeted: “The Union Flag isn’t the issue – it’s the veil of legitimacy it bestows on White Nationalism that is the issue.

“White Nationalism is what passes for British patriotism today & the British flag is its standard.

“Is the Queen/Govt the standard bearer?”

In a separate tweet, Mr Gardiner also wrote: “One of the most beautiful and inspiring scenes in the world today.

“The Union Jack flying over Regent Street in Central London.

“A symbol of freedom, liberty and Britain’s tremendous role for centuries as a great world power.”