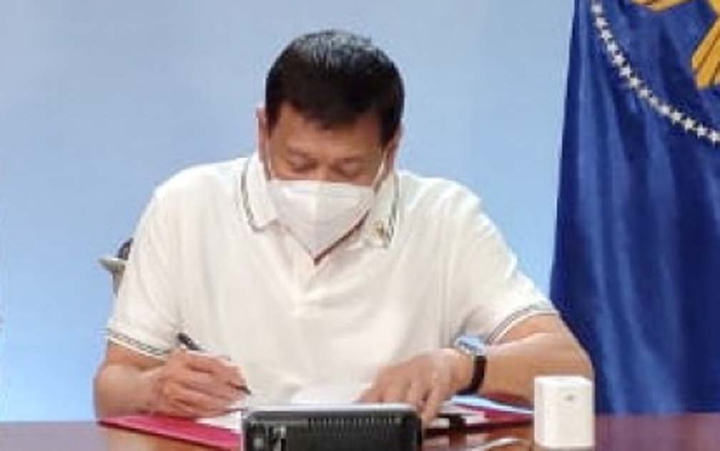 WITH only a few weeks left before the end of his term, President Duterte is now preparing for an “orderly exit” by officially forming a transition committee to facilitate the seamless transfer of power to the next administration.

In his Administrative Order (AO) No. 47, Duterte created the Presidential Transition Committee (PTC) to “provide support” to the incoming Cabinet members.

“There is a need to create a Transition Committee that will work closely with the representative of the President-elect to ensure a proper and orderly transition of government into the next administration,” Duterte said.

Chaired by Executive Secretary Salvador C. Medialdea, the PTC will also include the secretaries of the National Economic and Development Authority (Neda), Department of Budget and Management (DBM), Department of Finance (DOF) and Department of Foreign Affairs (DFA) as its members.

The PTC will primarily oversee and coordinate the initiatives of the Internal Transition Committees (ITC) of each department in the executive branch.

Each affected departments, agencies, bureaus, offices, and other instrumentalities of the government were tasked to create their ITCs within five days from the effectiveness of  AO 47 after it was issued on Tuesday.

During his public address last Wednesday, Duterte said he is now eagerly awaiting for the proclamation by the Commission on Elections of his duly elected successor.

“Once the will of the people has finally been made known, and all the winners have been officially proclaimed, we will begin the important process of transition of power to our new set of leaders,” Duterte said.

“By noon of June 30, I invite the general public to join me in rallying behind our new elected leaders so we can continue the difficult but rewarding task of building a stronger and more progressive nation,” he added.

Based from the partial and unofficial election results in the transparency server of Comelec, former senator Ferdinand “Bongbong” R. Marcos Jr. is leading in the presidential race with a vote of over 31 million.

Medialdea assured government operations will not be affected during the transition process for the new administration.

“The entire Executive branch will continue to perform and dispense with its duties but ready to turn over the reins to the next president,” Medialdea said.

“It is the goal of the PTC to ensure a smooth and seamless transition while ensuring the continued and efficient delivery of public service,” he added.

However, he urged the poll body to investigate the reported glitches in some of the vote counting machines (VCM) to allay public concerns over possible irregularities in the election results.

“I don’t see any cheating [in the polls]. I will not allow it. But just to satisfy the doubts of a few of them, there should be an investigation and its results should be presented to the public,” Duterte said.

Acting Comelec spokesperson John Rex C. Laudiangco said they are already looking into the matter of 915 defective VCMs to prevent similar incidents in the 2025 polls.

“Even before the President made that statement, we are already set to conduct an investigation,” Laudiangco said in a press conference last Thursday.

“We want to determine what were the reasons [for the defects], so that in the next elections we know what components fail and if it is purely because of procedural [reasons],” he added.