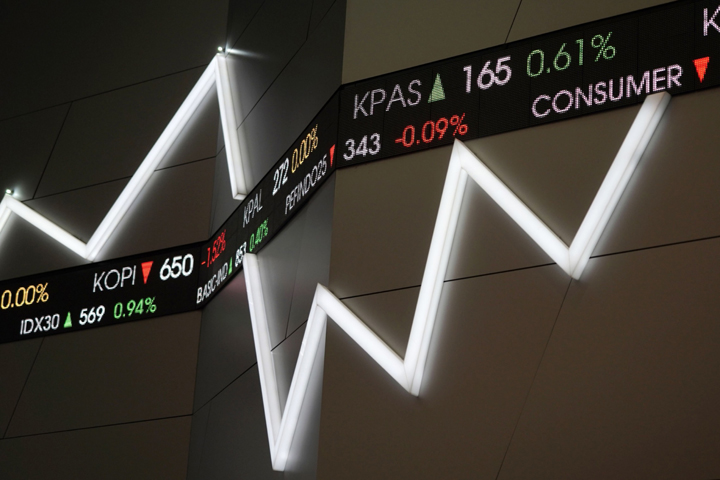 At a time when most of the world’s stock markets are languishing due to the Federal Reserve’s tightening cycle, Indonesia’s equity benchmark is pushing toward a record high.

The benchmark Jakarta Composite Index (JCI) closed just 0.6 percent away from a peak set in April after briefly surpassing that level. Elevated commodity prices and optimism about the economic outlook are driving gains in Southeast Asia’s biggest equity market—which has powered its way to a gain of almost 10 percent this year.

From stocks to credit and sovereign debt, Indonesia has emerged as a haven of sorts from the turmoil fueled by rising US interest rates. A less aggressive pace of policy tightening and resilient growth have left the economy in a better shape to withstand the fallout from a global downturn.

“Indonesia is still relatively attractive with strong growth and favorable commodity prices,” said Mandiri Investasi President Director Aliyahdin Saugi. “Fiscal and monetary policies are still quite good, so that rupiah stability is maintained. Foreign investors should see that this is still quite positive for Indonesia, and they can support our market.”

The JCI has advanced for two straight months and Citigroup Inc. analysts including Ferry Wong expect it to climb to 7,575 by year-end. A key exporter of commodities such as palm oil, coal, nickel and tin, Indonesia has benefited from a surge in prices and its stock market has beaten all its major Asian peers this year.

Even for a dollar-based investor, the benchmark has climbed 6 percent, an attractive return when you consider the MSCI AC World Index is down some 20 percent in 2022. Global funds have poured almost $5 billion into Indonesian equities this year.

It also helps that Bank Indonesia has adopted a more measured approach toward normalizing policy, as it only began tightening last month with a quarter point hike. The authorities have been able to buy themselves time by using the reserve requirement and bond sales to mop up excess liquidity in the financial system.

Sentiment has also been boosted by an improving economic outlook after the nation’s annual budget unveiled last month included plans to shrink the fiscal deficit and return growth to pre-pandemic levels. Authorities expect the Indonesian economy to expand 5.1 percent-5.4 percent this year and 5.3 percent in 2023.

That doesn’t mean there are no concerns. China’s slowing growth will likely hurt demand for commodities and the Federal Reserve’s resolve to keep raising rates is expected to weigh on the global economy and exports.

But for now, the optimism has spilled over into other Indonesian markets. Government bonds have gained almost 2 percent this quarter to beat all their emerging Asian peers while the rupiah has proven to be the most resilient against a resurgent dollar during the period.

In the corporate dollar bond market, the average premium demanded by investors to hold the nation’s US currency credit dropped 46 basis points this quarter, the most among its peers in the region.

Indonesia marketed a benchmark-sized dollar bond on Tuesday, with the debt being offered across three tenors, from 5 years to 30 years. Investors have been buoyed by the nation’s improving credit fundamentals. The government announced a lower fiscal deficit target of 2.85 percent of gross domestic product for 2023, below the mandated 3 percent threshold, while its current account position has been boosted by rising commodity prices. Bloomberg News