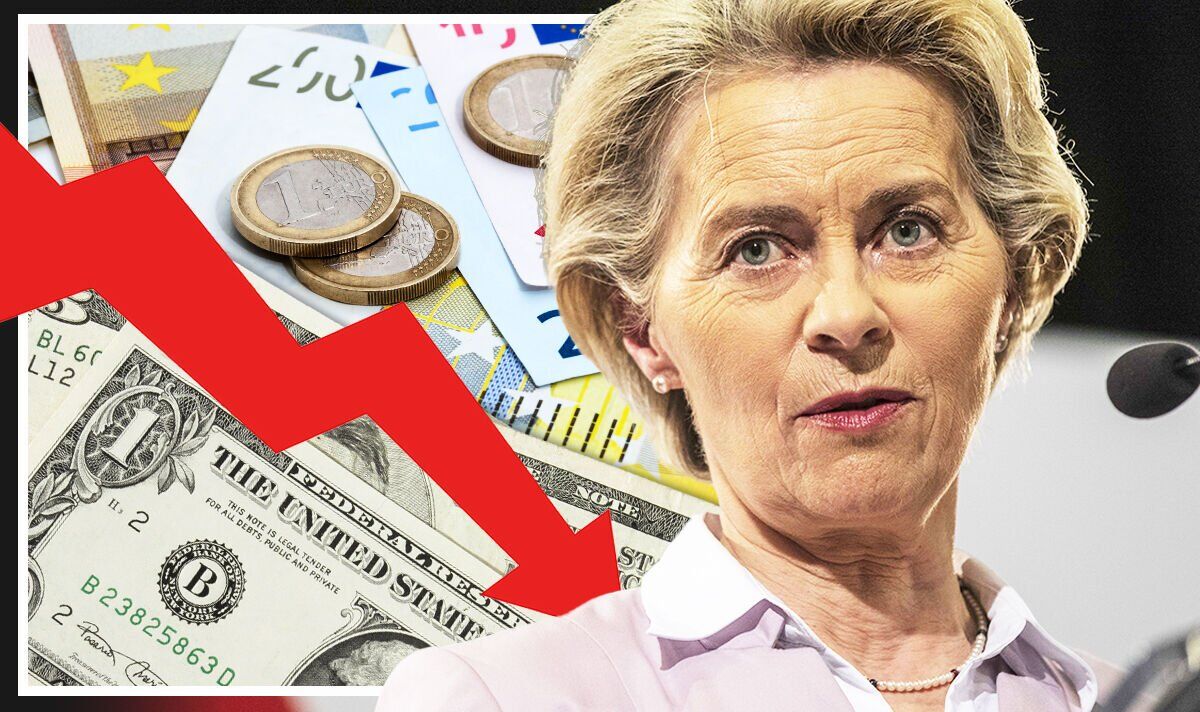 The bloc’s currency plunged to $0.9998 against the greenback, breaking below the $1 level for the first time since December 2002, before the euro back up to $1.0023. It has already sunk by nearly 12 percent this year, deepening fears the Eurozone could be plunged into a disastrous recession. The situation was worsened on Wednesday when it was revealed US consumer price inflation had soared to 9.1 percent – the highest in more than 40 years.

The euro only briefly brushed parity against the US dollar this morning, but it was enough to send shockwaves through Europe’s biggest stock market indexes.

The euro had started the year strongly but the Eurozone has been battered by an energy crisis sparked by sanctions on Russia from its invasion of Ukraine.

There are concerns when this maintenance is complete, Vladimir Putin may switch off the gas supply from Russia into Europe in a move that would send fuel prices spiralling even further.

Eurozone price pressure increased yet again last month when inflation jumped to 8.6 percent – up from 8.1 percent in May.

Despite some traders pointing to support in the market, the likes of JPMorgan have warned the euro could plummet to as low as $0.90 if Russia now severely restricts the region’s gas supply.

There are also growing fears that a continued sharp economic slowdown in the Eurozone will leave the European Central Bank’s (ECB’s) interest rates far below those of the US Federal Reserve.

In 2020, the central bank published a paper citing models estimating that a one percent depreciation of the euro against a host of other currencies could add as much as 0.11 percentage points to inflation within a year — and 0.25 percentage points over three years.

ING economist Chris Turner warned if the euro continues to slide, “no doubt [the ECB] will be quite concerned by the move — especially if it develops into a ‘sell the Eurozone’ mentality”.

He added: “Yet faced with the looming risk of recession — and the euro being a pro-cyclical currency — the ECB’s hands may be tied in its ability to threaten more aggressive rate hikes in defence of the euro.”

During the weekend, IIF Chief Economist Robin Brooks warned the current sharp fall in the euro has “lots more room to go, and that we’re “only getting started”.

He tweeted: “When an exchange rate is moving, there’s always a question whether it still has a long way to go or if the move is done.

“The fall in the Euro has LOTS more room to go. Eurozone 2-year interest rates have only just begun to fall vis-à-vis US rates. We’re only getting started…”

Referring to the soaring US inflation in relation to the plunging euro, Close Brothers Asset Management Chief Investment Officer Robert Alster said: “CPI of 9.1 percent is the highest number in 40 odd years, the only piece of good news is that core inflation is slightly lower.

Lou Brien, a market strategist at DRW Trading in Chicago, said: “The sanctions that are trying to hurt Russia are also hurting the European Union.

“They are in a tough time to begin with coming out of the pandemic, but this additional layer of trouble also makes the euro less attractive.”