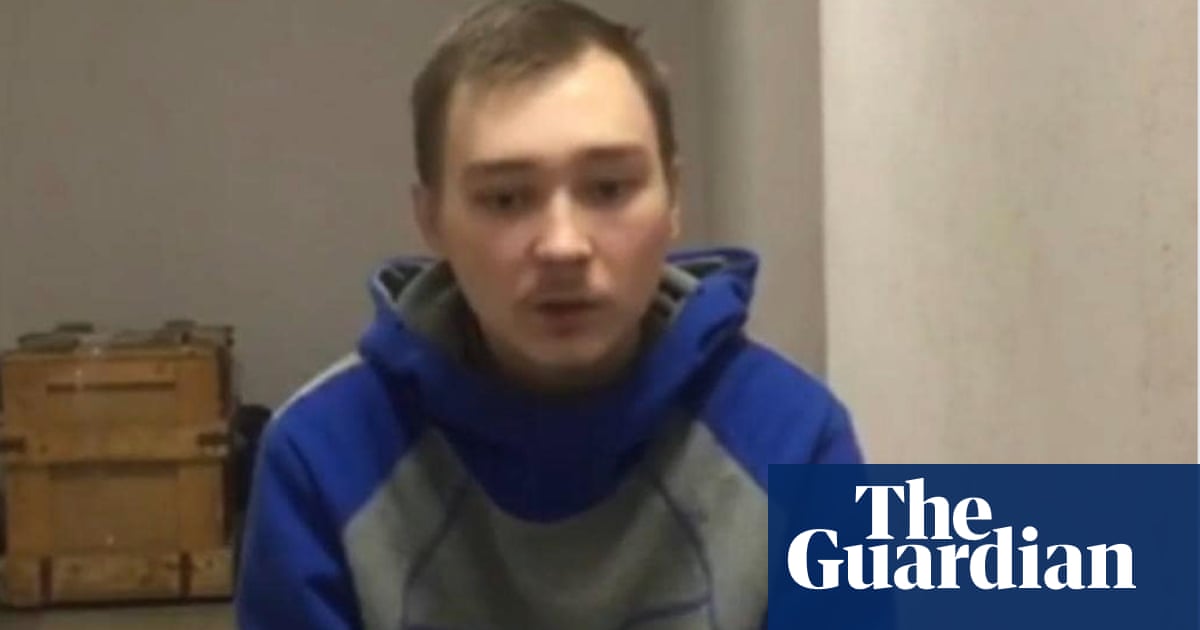 A Russian soldier has appeared in court at the start of the first war crime trial since Vladimir Putin invaded Ukraine.

Vadim Shysimarin, a commander of the Kantemirovskaya tank division, arrived at Kyiv’s small district court No 3 in a grey tracksuit and handcuffs for a preliminary hearing. The 21-year-old is charged with murdering a 62-year-old man and is being held in Ukrainian custody.

A date for the trial has been set for 18 May.

Shysimarin’s lawyer said his client had confessed to killing the victim but had not yet discussed whether to plead guilty. Shysimarin, who was helped by a Russian interpreter to follow the hearing, spoke briefly to confirm his name and that he understood the charges against him.

It is alleged that Shysimarin had been fighting in the Sumy region in north-east Ukraine when he killed a civilian on 28 February in the village of Chupakhivka.

He is accused of shooting at a car after his convoy of military vehicles came under attack from Ukrainian forces. He then drove the car away with four other soldiers as he sought to flee.

Shysimarin shot dead the unarmed man, who was on a bicycle and talking on his phone, after being ordered “to kill a civilian so he would not report them to Ukrainian defenders”, according to prosecutors.

The crime is said to have happened “dozens of metres” from the victim’s house and was committed using an AK-74 rifle. The victim’s name was not made public.

The trial is another propaganda triumph for Kyiv, and comes as the number of crimes registered by Ukraine’s general prosecutor surpassed 11,000 and Unicef reported at least 100 children had been killed in the war in April alone.

Elsewhere on the ground on Friday, Ukraine claimed it had damaged a Russian navy logistics ship near Snake Island in the Black Sea.

“Thanks to the actions of our naval seamen, the support vessel Vsevolod Bobrov caught fire – it is one of the newest in the Russian fleet,” said Serhiy Bratchuk, a spokesperson for the Odesa regional military administration.

Satellite imagery provided by Maxar, a private US-based company, showed the aftermath of what it said were probable missile attacks on a Russian Serna-class landing craft near the island, close to Ukraine’s sea border with Romania. Maxar images also showed recent damage to buildings on the island. Russia’s defence ministry did not immediately respond to a request for comment.

Renewed fighting around Snake Island in recent days may become a battle for control of the western Black Sea coast, according to defence officials, as Russian forces struggle to make headway in Ukraine’s north and east.

Ukrainian forces are reported to have driven Russian troops out of the region around the second-largest city, Kharkiv. The Reuters news agency said its journalists had confirmed Ukraine was in control of territory stretching to the banks of the Siverskiy Donets River, about 25 miles (40km) east of Kharkiv.

Fighting has continued in Ukraine’s south and east. Ukraine’s presidency said shelling continued throughout Lugansk – part of the Donbas region where Ukrainian forces are fighting Russian armour and Kremlin-backed separatists.

Ukraine’s president, Volodymyr Zelenskiy, said in his Thursday night address to the nation that Russian forces had destroyed 570 healthcare facilities in the country, including 101 hospitals. “What for? It’s nonsense. It’s barbarity.”

In the north-eastern region of Chernihiv, three people were killed and 12 others wounded on Thursday in a strike on a school in Novgorod-Siversky, the emergency services said.

Iryna Vereshchuk, a Ukrainian deputy prime minister, said “difficult talks” were under way over the evacuation of 38 seriously wounded troops from the Azovstal steelworks in Mariupol.

She said: “We have started a new round of negotiations around a roadmap for an [evacuation] operation. And we will start with those who are badly wounded,” she told Ukraine’s 1+1 television.