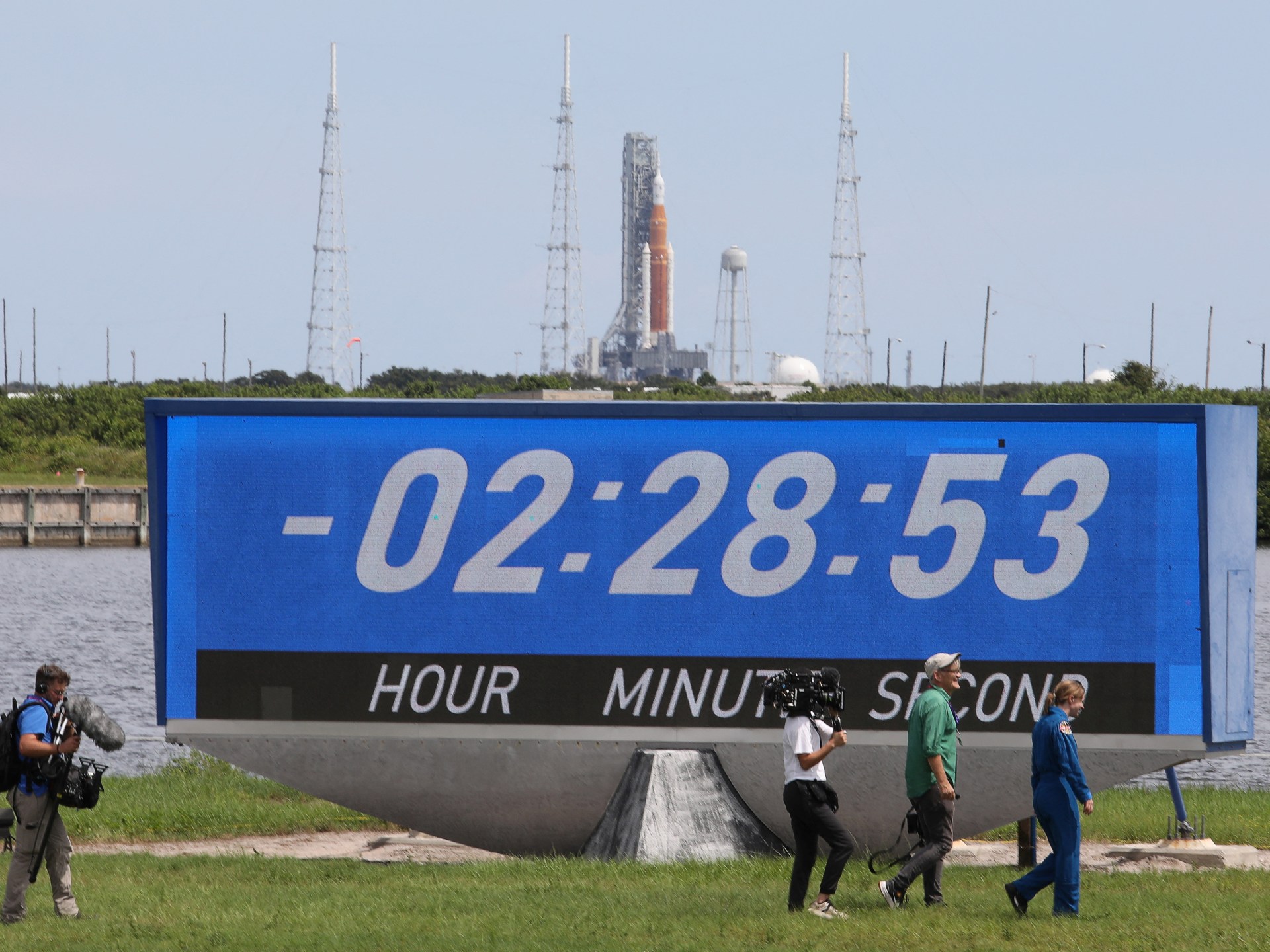 NASA has aborted a second launch attempt for its giant Moon rocket because of yet another fuel leak.

The previous attempt on Monday was also marred by escaping hydrogen, but those leaks were elsewhere on the 98-metre (322-foot) rocket, the most powerful ever built by NASA.

The latest setback could delay the inaugural flight of NASA’s Moon-to-Mars Artemis programme for weeks, if not months.

The uncrewed test flight, aimed at launching the capsule to the Moon and back, was to have marked the inaugural voyage of both the SLS and Orion a half-century after the last Apollo lunar mission, the forerunner of the Artemis program.

The countdown was scrubbed after Kennedy Space Center technicians made three failed attempts to fix a “large” leak of supercooled liquid hydrogen propellant being pumped into the rocket’s core-stage fuel tanks.

Officials said the leak was too tricky and time-consuming to finish troubleshooting and fix on the launch pad before the current launch period allotted to the mission expires on Tuesday.

This means the earliest opportunity to try again would come during the next launch period that runs September 19 to 30, or during a subsequent October window, an associate NASA administrator, Jim Free, told reporters at a late-afternoon briefing.

The spacecraft will now be rolled back into its assembly building.

NASA Administrator Bill Nelson stressed that safety is the top priority, especially on a test flight like this where everyone wants to verify the rocket’s systems “before we put four humans up on the top of it”.

“Just remember: We’re not going to launch until it’s right,” he said.

Launch-day delays and malfunctions are not uncommon in the space business, especially for new rockets such as NASA’s SLS, a complex vehicle with a set of pre-liftoff procedures that have yet to be fully tested and rehearsed by engineers without a hitch.

On average, the odds of scrubbing a launch on any given day for any reason, including foul weather, are about one-in-three.

Those odds did not stop spectators from jamming the Florida coast to see the SLS rocket soar. Local authorities had expected enormous crowds because of the long Labor Day holiday weekend.

Al Jazeera’s Alan Fisher, reporting from Cape Canaveral, said thousands of people had gathered in anticipation of the planned launch.

“It’s a real disappointment for the thousands of people who came to this part of Florida to watch a lunar launch on the space coast … A lot of people made a special effort to come here just to see the launch,” he said.

“Nobody wants to be planning a space launch and hear those clichéd and fatal words – ‘We have a problem,’ – but that is clearly what happened here.”

Artemis – years behind schedule and billions over budget – aims to return astronauts to the Moon’s surface as early as 2025, though many experts believe that time frame will likely slip.

Twelve astronauts walked on the Moon during six Apollo missions from 1969 to 1972, the only spaceflights yet to place humans on the lunar surface. But Apollo, born of the US-Soviet space race during the Cold War, was less science-driven than Artemis.

The new Moon programme has enlisted commercial partners such as SpaceX and the space agencies of Europe, Canada and Japan to eventually establish a long-term lunar base of operations as a stepping stone to even more ambitious human voyages to Mars.

Getting the SLS-Orion spacecraft launched is a key first step.

Its first voyage is intended to put the vehicle through its paces in a rigorous test flight, pushing its design limits and aiming to prove the spacecraft suitable to fly astronauts.

If the mission succeeds, a crewed Artemis II flight around the Moon and back could come as early as 2024, to be followed within a few more years with the programme’s first lunar landing of astronauts, one of them a woman, with Artemis III.

Billed as the most powerful, complex rocket in the world, the SLS represents the biggest new vertical launch system NASA has built since Saturn V during the Apollo era.

Although no humans will be on board, Orion will carry a simulated crew of three – one male and two female mannequins – fitted with sensors to measure radiation levels and other stresses that real-life astronauts would experience.