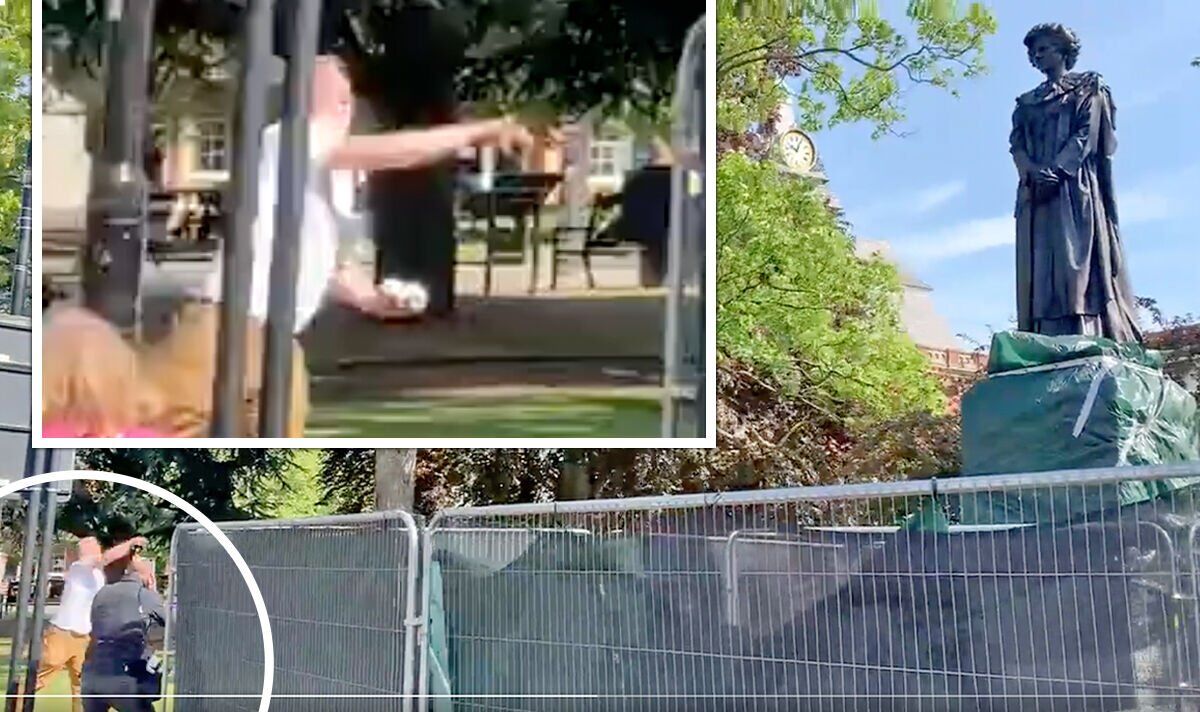 A protester has thrown eggs at a statue of Margaret Thatcher in her home town of Grantham in Lincolnshire, less than two hours after it was lowered into place. The monument was installed despite warnings from furious locals.

Only one of the eggs thrown actually hit the statue.

This is due to the protestor in question having to throw the eggs from behind a temporary fence surrounding the memorial.

Police had warned the fence would be required to deter “politically-minded” vandalism.

A cry of “oi” could be heard after one connected with the lower part of the monument.

The statue of the first female prime minister was installed on Sunday morning and sits atop a 10ft-high granite plinth.

A planning committee unanimously voted in favour of the £300,000 statue back in February 2019.

Prior to the statue being erected there, the only commemoration in the area for Baroness Thatcher is a plaque on the corner of North Parade and Broad Street to show where she was born.

CCTV equipment has been installed opposite the memorial, which stands in Grantham’s Civic Quarter, to attempt to combat any threats of vandalism, the council said.

The homage to Mrs Thatcher, who won the Conservatives three general elections while in office from 1979 to 1990, stands between two existing statues of Sir Isaac Newton and Frederick Tollemache.

Over 13,000 people expressed their interest in a Facebook event that proposed an “egg-throwing contest” at an unveiling ceremony when this was first approved by the council in 2020.

Around 2,400 others also visited the Facebook page to say they would go to the event including “egg-throwing … and potentially graffiti art”.

Councillor Kelham Cooke said “we must never hide from our history” and described the statue as a “fitting tribute to a truly unique political figure”.

In a statement, the Tory council leader said: “Margaret Thatcher will always be a significant part of Grantham’s heritage. She and her family have close ties with Grantham. She was born, raised and went to school here.

“It is, therefore, appropriate that she is commemorated by her home town and that the debate that surrounds her legacy takes place here in Grantham.”

He also said the memorial “will be a talking point for generations to come”.

PA reports that a number of motorists driving past the memorial could be heard booing loudly.

One man reportedly shouted “tear it down” while another said: “this is no good for Grantham, is it?”

Despite criticism from some members of the public, others stopped to take selfies with the statue.