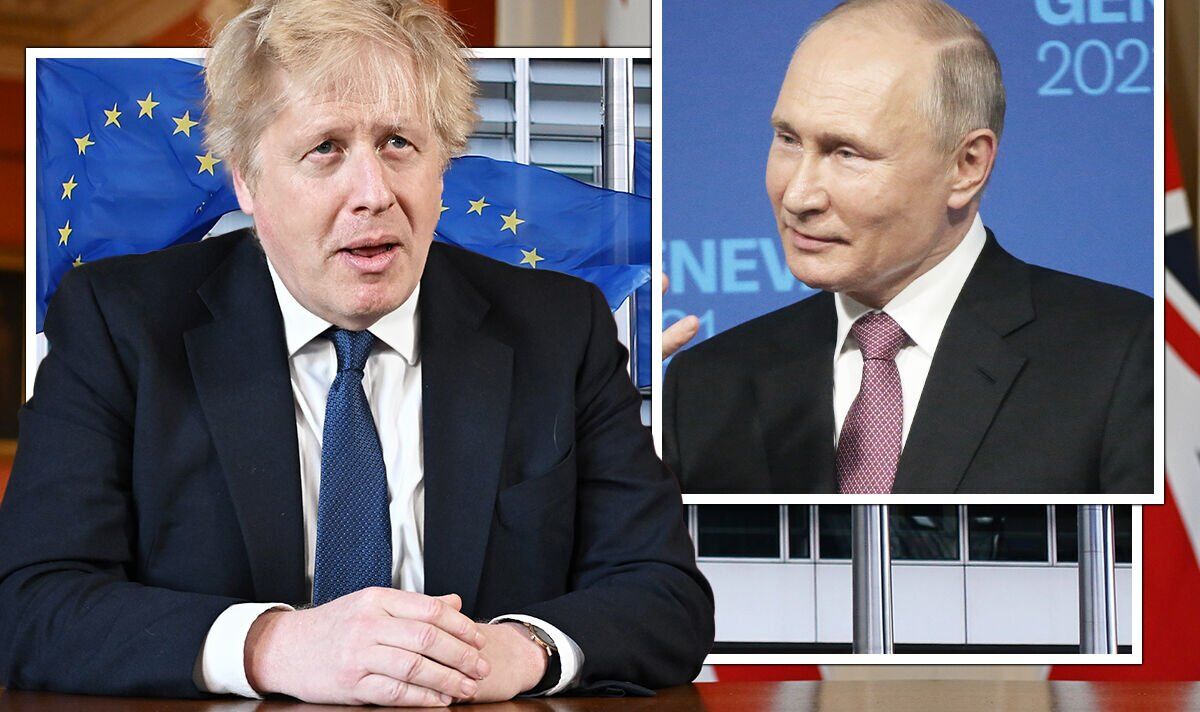 The row over post-Brexit trading arrangements in Northern Ireland exploded again this week, with the two sides locked in a vicious war of words. The UK, led by Foreign Secretary Liz Truss, has repeatedly warned it is ready to invoke Article 16 and override large parts of the Northern Ireland Protocol if a solution cannot be agreed But the European Union is refusing to back down and has warned of fierce retaliation if Britain was to break an international treaty signed between the two sides.

Coventry University politics professor Matt Qvortrup warned Britain would be breaking the “rule of law” if it were to breach the agreement with EU, and Putin would be ready to pounce.

He told Express.co.uk: “In international law, covenants must be honoured and so you have to stick to the agreement you have made.

“If Britain was to invoke Article 16 in the way Liz Truss has spoken about, then they would be breaching an international treaty.

“Should the Government go ahead and break an international treaty, then it would have consequences.

“At the moment we are fighting a war against somebody and in international affairs, standing up for the rule of law.

“If you break an international law or agreement, that is a massive no-no.”

Professor Qvortrup, who is also an expert in law, added: “If we are to have any credibility in saying we believe in the rule of law but then we break a rule, that would be terrible and would be a godsend to Vladimir Putin.

“He has Britain firmly in his sights and breaking the rule of law would be playing into his hands.

Professor Qvortrup concluded: “My last conversation with Boris Johnson when he was Mayor of London was when I spoke to him in Latin, which translated to: ‘A clever man never urinates against the wind’.

“If I were to stick with my conversation almost a decade ago with the Primer Minister, then I would say essentially the same thing.

“What the UK must be focusing on is forming a united front with the EU against the Russians.

“But having a battle with the Europeans over this deal will not be helpful.”

She said “the situation in Northern Ireland is a matter of internal peace and security for the United Kingdom, and if the EU would not show the requisite flexibility to help solve those issues, then as a responsible government we would have no choice but to act”, according to a Downing Street statement.

In response, Mr Sefcovic warned the possibility of Britain acting unilaterally was “of serious concern” and any move to scrap the agreement would be “unacceptable”.

He insisted the EU had offered the UK as serious of solutions to break the deadlock and that there was “still potential to be explored in our proposals. We are still awaiting the response from the UK side”.