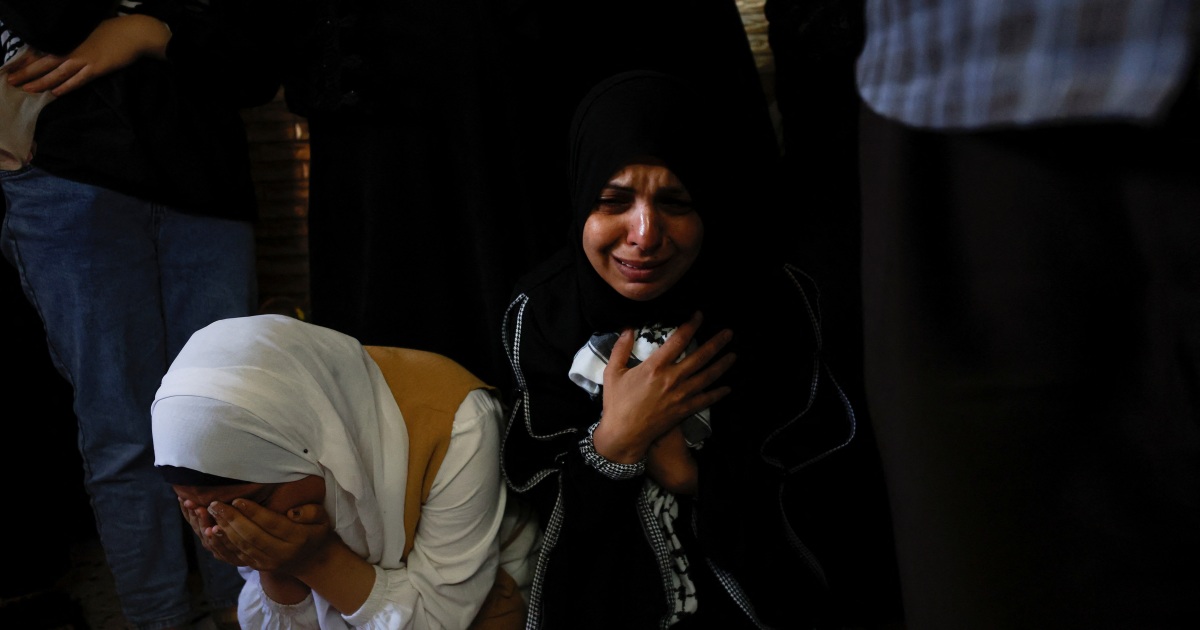 Israeli army kills 17-year-old and arrests a senior Islamic Jihad leader during a raid in the occupied West Bank.

The youth, identified as 17-year-old Dirar al-Kafrini, was killed late on Monday when the shooting broke out between the Israeli army and Palestinian fighters in the camp.

The Palestinian health ministry said al-Kafrini was already dead when he was brought to the Jenin public hospital just before 11pm (20:00 GMT).

[Translation: The martyr Dirar al-Kafrini that was killed by occupation fire in Jenin moments ago]

The ministry reported that another Palestinian was shot with live ammunition in the leg and was hospitalised in moderate condition.

A funeral procession for al-Kafrini took place on the streets of the Jenin camp shortly after the killing.

During the raid, Israeli forces arrested one of the most senior leaders in the Palestinian Islamic Jihad movement (PIJ) in the West Bank, Bassam al-Saadi.

They also arrested his son-in-law, Ashraf al-Jada, while he was visiting al-Saadi’s home in the camp.

Videos and images shared on social media showed traces of blood on the floor of al-Saadi’s home following the arrest. The family and the Palestinian Prisoners’ Society said the army had assaulted al-Saadi and his wife during the arrest. Al-Saadi’s wife, Nawal, was hospitalised due to the injuries she sustained.

In a statement on Monday night, the PIJ’s armed wing Al-Quds Brigades, announced “a state of alertness and readiness among its fighters and active combat units” which it said comes “in response to its duty towards the treacherous aggression that the great leader, the sheikh Bassam al-Saadi and his family were exposed to in Jenin”.

The Israeli army said in a statement it “arrested two suspects who were transferred to the general security services for questioning” on Monday night.

It also said its soldiers were met with live fire in the camp, and they fired back.

Al-Saadi is a former prisoner who spent many years in and out of Israeli jails. He was last arrested in 2018 following a five-year effort by the Israeli army to locate him, and was released in 2020. Two of his sons were killed during Israel’s large-scale invasion of the Jenin refugee camp in 2002.

Head of the commission Qadri Abu Bakr said they “hold the occupation’s government fully responsible for the life of the captive al-Saadi and for the execution of the martyr Dirar al-Kafrini”, adding that the “occupation does not stop targeting Jenin camp and its residents”.

Israel’s raid on Jenin comes as part of months-long efforts to quash rising armed resistance in the city’s refugee camp, where the armed wings of the PIJ and the ruling Fatah party are active.

On May 11, Israeli forces shot dead veteran Al Jazeera journalist Shireen Abu Akleh, 51, while she was reporting on a raid in Jenin.

At least 60 Palestinians have been killed by the Israeli army since the start of the year, about a third of them were from Jenin.

The Israeli army raids Palestinian cities and villages in the West Bank on a near-nightly basis, often resulting in the killing or wounding of Palestinians.

On Sunday night, Israeli forces arrested some 43 Palestinians from across the West Bank.