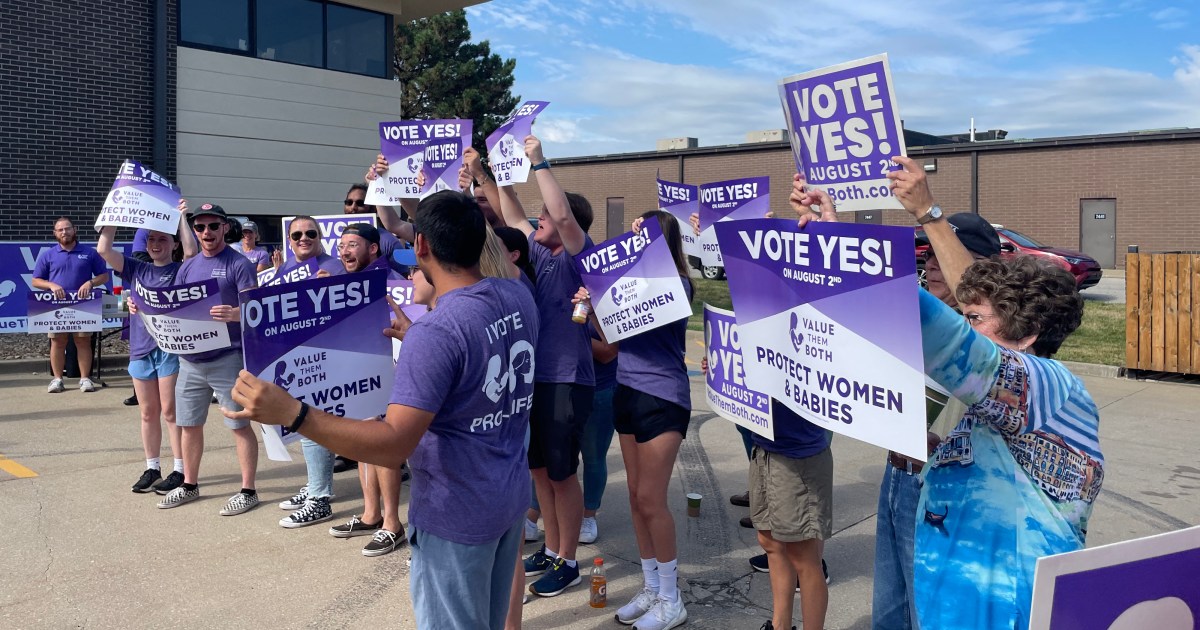 The Midwestern US state will vote on Tuesday on whether to repeal the protection of abortion rights from its constitution.

The Midwestern state of Kansas is set to vote on whether to repeal abortion protections from its constitution in an early test of United States public opinion after the country’s top court revoked the federal protection of the procedure.

The vote on Tuesday comes more than two months after the US Supreme Court overturned Roe v Wade, the landmark 1973 case that guaranteed a constitutional right to abortion.

As conservative states move to outlaw abortion, Kansas has put to the ballot a proposal to amend its own constitution that would allow the state’s legislators to regulate the procedure. Abortion is currently legal in Kansas following a 2019 state Supreme Court opinion ruling the state constitution guaranteed it as a right.

Tuesday’s referendum is the first time the issue will be put to a direct vote since the US Supreme Court’s ruling late in June.

The vote has garnered national attention, with Democrats calling on voters in the state to reject the amendment.

House Speaker Nancy Pelosi urged a “no” vote on the proposal, saying in a social media post last week that “Reproductive freedoms are on the Kansas ballot.”

“Kansas is the first state in line to vote on reproductive freedoms, so I voted early against the restrictive constitutional amendment,” Congresswoman Sharice Davids, a Kansas Democrat who has been campaigning against the amendment, wrote on Twitter.

Meanwhile, Republicans who consider the overturning of Roe a victory for their anti-abortion agenda have been rallying behind the amendment.

Former Secretary of State Mike Pompeo, who represented Kansas in Congress before joining the administration of former US President Donald Trump in 2021, called for a “yes” vote to enable the “democratic process” to regulate abortion.

“I ask Kansans who believe in life not to surrender, never to give an inch,” he wrote in a column published in the Kansas City Star on July 27.

The closely watched election in the mostly conservative state will show where voters stand on an issue that Democrats hope will energise their base in the crucial general midterm congressional elections in November.

Democrats have been pushing to pass a federal law to protect abortion rights, but the House-approved effort has failed to meet the 60-vote threshold needed in the Senate. Democrats only have a slim majority in the 100-member chamber.

In Kansas, the abortion vote appears to be fuelling turnout, early data indicates.

Secretary of State Scott Schwab said nearly 120,000 advance mail ballots were sent to voters by last Friday, more than twice the number of ballots sent during the same period in 2018 – the last midterm primary. Schwab predicted a 36 percent turnout, compared to 27.1 percent in 2018.

“This voter turnout prediction is based on 2018 data because we have similar races on the ballot this year, while also keeping in mind we have a constitutional amendment driving voter interest,” Schwab said in a statement.