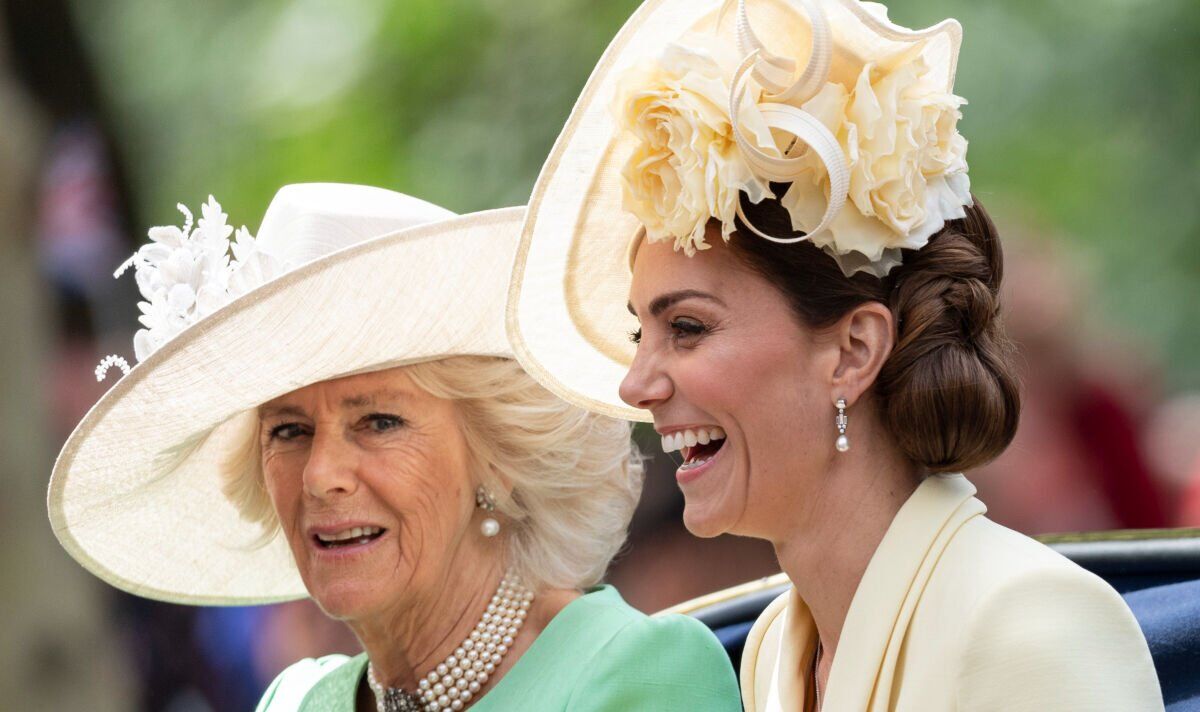 Following the departure of the Duke and Duchess of Sussex two years ago, other senior members of the Royal Family have stepped up to undertake more royal duties. Often praised for their dedication to service and to the Crown, Kate and Camilla have steadfastly committed to serving the Queen after being welcomed into the fold.

Prince William tied the knot with Kate back in April 2011 at Westminster Abbey and their nuptials were watched by millions all across the globe.

Royal author Tina Brown claims there were some doubts at this time about Kate’s position in the Firm and how she would cope with becoming Queen Consort when her husband takes to the throne.

She said questions were raised as to how Kate would navigate the “difficult and very constrained situation” she was in.

However, the author of ‘The Palace Papers: Inside The House Of Windsor – The Truth And The Turmoil’ claims the Duchess has now become a key figure in the monarchy.

Ms Brown told BBC Radio 4’s Today programme: “It’s amazing really how important, frankly, to the future of the monarchy the Duchess of Cambridge has become.

“When she first married William, it was thought ‘how can a girl from middle-class origins really become a future queen?’

“Is she going to be able to handle everything that will be thrown at her in this very difficult and very constrained situation?

“But it’s incredible, now people have to ask ‘well, what on earth would happen without the Duchess of Cambridge?”

She also went on to say that mother-of-two Kate, 40, had become “an important sort of a stalwart figure” alongside Camilla, 74.

Ms Brown claims that it was “very significant” that the Queen waded in on the title row that has surrounded the Duchess of Cornwall as royal watchers speculated about the future of the monarchy.

Many wondered whether Camilla would take upon the title of Princess Consort as previously thought, or whether she’d opt for Queen Consort.

In February, the Queen expressed her “sincere wish” that Camilla takes on the role when Charles becomes King.

Tina Brown, who wrote the Diana Chronicles in 2006 about the late Princess of Wales, claims Her Majesty’s actions rewarded the Duchess for “being gracious” and playing the role of a royal consort dutifully.

She said: “it was very significant that the Queen a few weeks back said that it was her desire to have Camilla known as ‘Queen’, because in a sense she was validating and rewarding Camilla for her last 20 years of being such a supportive royal wife and being dutiful and doing her duties without any kind of complaint, being discreet, being gracious.”

Within a statement to mark her Platinum Jubilee year, the Queen also called on the nation to support both Camilla as Queen and Charles as King.

In response to Her Majesty’s statement, Camilla said she felt “very touched” and “very, very honoured”.

The Prince of Wales issued his own statement in response to Her Majesty’s where he showed his gratitude for her support, adding that he and his “darling wife” were “deeply conscious of the honour represented” by his mother’s wish.

In his message, Charles also praised Camilla for her work as a member of the Royal Family and acknowledged her ongoing commitment to him.

The Prince of Wales said: “We are deeply conscious of the honour represented by my mother’s wish.

“As we have sought together to serve and support Her Majesty and the people of our communities, my darling wife has been my own steadfast support throughout.”

The Duchess of Cornwall supports more than 90 charities as Patron or President and while her charity work is varied she particularly focuses on the themes of health and literary, female empowerment, food, the arts and victims of rape and sexual abuse and domestic violence.

While much of the Duchess of Cambridge’s royal work focuses on the themes of family and children, which are causes close to the Duchess’ heart.

The mother-of-three launched the Royal Foundation Centre for Early Childhood in June last year, after over a decade of concentrating on the issue.

It aims to “drive awareness of and action on the extraordinary impact of the early years, in order to transform society for generations to come”, according to the Royal Foundation website.