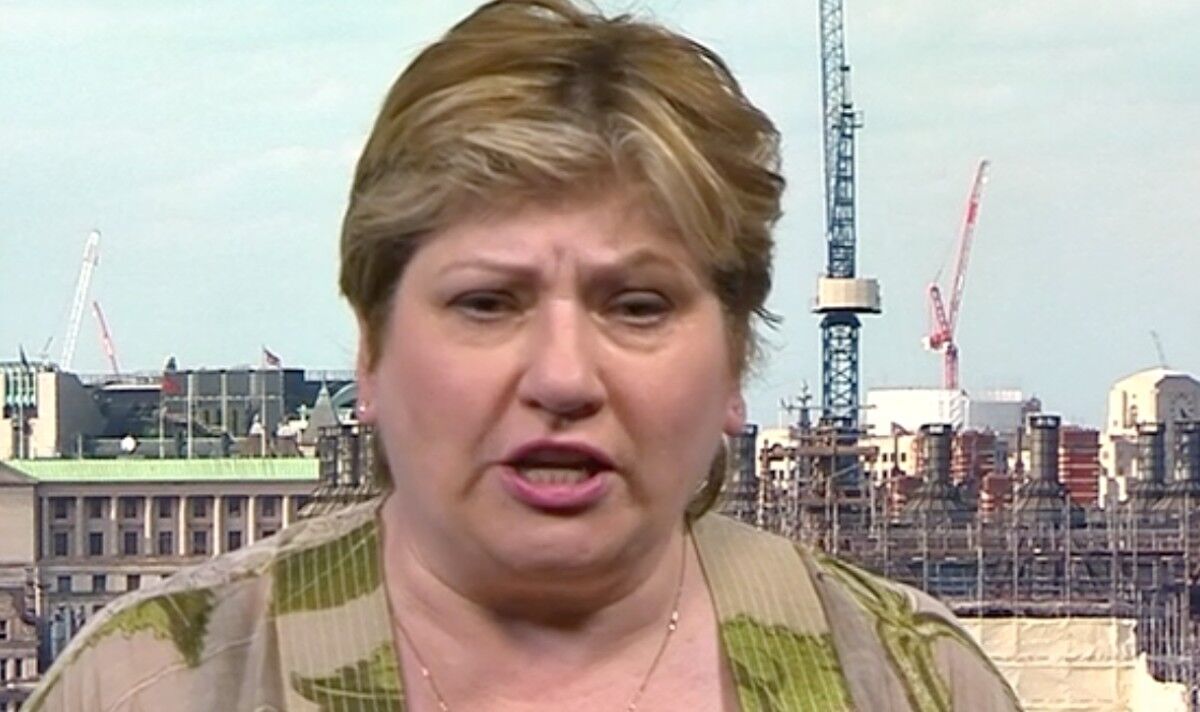 Labour’s Shadow Attorney General was asked whether she had backed Sir Keir Starmer‘s promise to resign if Durham police fined him for breaching lockdown rules. Emily Thornberry defended her party leader over the gathering which took place last April at which Sir Keir was pictured having a beer and curry. On Monday, Sir Keir made a speech in which he offered to quit as Leader of the Opposition if police investigating the event were to issue him with a fine.

Speaking on the BBC, Ms Thornberry made clear she does not believe Sir Keir will be fined.

She told BBC News: “I said to him that there is no way that you have committed any crime.

“There is no way that you have breached any rules, you simply ate because we don’t live on thin air and you were out campaigning and you needed to be able to have something to eat.

Sir Keir repeatedly denied breaking the laws in a televised statement on Monday afternoon as he faces pressure over the curry and beer gathering in Durham last year.

He accused the Conservatives accusing him of breaking lockdown rules of “trying to feed cynicism to get the public to believe all politicians are the same”.

“I believe in honour, integrity and the principle that those who make the laws must follow them and I believe that politicians who undermine that principle, undermine trust in politics, undermine our democracy and undermine Britain,” he said, from Labour’s London headquarters.

“I’m absolutely clear that no laws were broken, they were followed at all times, I simply had something to eat while working late in the evening as any politician would do days before an election.

Sir Keir held talks with advisers on his strategy on Monday, having earlier pulled out of a discussion where he would have faced questions over his intentions.

He also did not attend a memorial service for former MP James Brokenshire at St Margaret’s Church in Westminster, where he was expected join politicians from across the divide including the prime minister and Cabinet members.

The Labour leader had been under growing pressure to set out his position, having called for the resignation of the Prime Minister and Chancellor Rishi Sunak after they were fined for a Covid breach.

A pre-emptive announcement on his future if he too is fined will enable him to continue calling for Mr Johnson to leave Downing Street while he is himself under investigation.

On Friday, Durham Constabulary said they had reversed an earlier decision on the case that no offence had been committed, after receiving “significant new information”.

In January, Sir Keir said the Prime Minister “needs to do the decent thing and resign” after he became embroiled in lockdown breach allegations.

Mr Johnson, his wife Carrie Johnson and the Chancellor received fines for breaking Covid laws in April, along with dozens others working in Whitehall and Downing Street.

At the time of the Durham gathering, non-essential retail and outdoor venues including pub gardens were open, but social distancing rules – which included a ban on indoor mixing between households – remained in place.