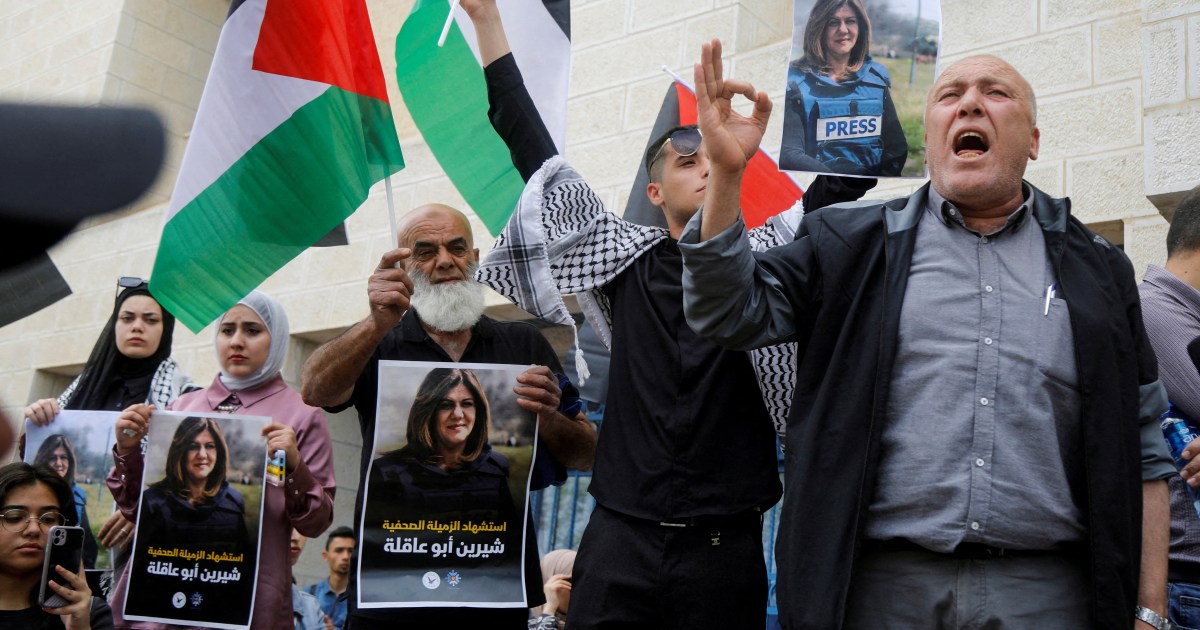 US president appears to rebuff request for meeting with slain journalist’s family during visit to Israel and occupied West Bank.

US President Joe Biden appears to have rejected a request by Shireen Abu Akleh’s family to meet with him during his visit to Israel and the occupied West Bank this week, as pressure mounts on the United States to ensure accountability for the journalist’s killing by Israeli forces.

The White House released a public schedule of Biden’s visit on Wednesday, and it did not include a meeting with the slain Al Jazeera journalist’s relatives. The New York Times also reported earlier in the day that Biden has “sidestepped” the family’s demand for a meeting. Abu Akleh was an American citizen.

Before Biden landed in Israel on Wednesday, US National Security Adviser Jake Sullivan told reporters that Secretary of State Antony Blinken had invited Abu Akleh’s family to the US.

“Secretary Blinken actually spoke with Shireen’s family a short while ago,” Sullivan said.

“He has invited the family to the United States to be able to sit down and engage with them directly. The administration, at the president’s direction, has been very much engaged in helping try to determine what exactly happened around the tragic circumstances of her death.”

He added that Abu Akleh’s killing “will be one of the subjects at play” during Biden’s talks in Israel. Sullivan also called for “accountability and making sure that we find a way to conclude this chapter justly”.

The White House did not respond to Al Jazeera’s request for comment on whether Biden would be willing to meet the family in Washington, DC.

Abu Akleh’s family berated Biden’s response to the killing last week, accusing his administration of whitewashing what it called “the extrajudicial killing” of the journalist by Israeli forces.

“We, the family of Shireen Abu Akleh, write to express our grief, outrage and sense of betrayal concerning your administration’s abject response to the extrajudicial killing of our sister and aunt by Israeli forces on May 11, 2022, while on assignment in the occupied Palestinian city of Jenin in the West Bank,” the family said in a letter to the US president.

The letter called on Biden to meet the family and push for meaningful accountability for the killing.

Last week, the State Department acknowledged that the fatal bullet that struck Abu Akleh likely came from an Israeli army position, but it framed the killing of the journalist as the unintentional “result of tragic circumstances”.

Although video footage, witness testimonies, and multiple investigations by independent media outlets have shown that there were no armed Palestinians in the area where Abu Akleh was killed, the US statement emphasised the context of the Israeli raid and shooting as a response to “a series of terrorist attacks in Israel”.

On Tuesday, the Committee to Protect Journalists (CPJ), a US-based watchdog, called on Biden to speak out on press freedom during his visit to the Middle East and grant the Abu Akleh family’s “request to meet with the president during his trip”.

Earlier this week, Cory Booker and Bob Menendez – two staunchly pro-Israel Democratic US senators who represent New Jersey where Abu Akleh was a registered resident – joined the growing calls in Congress for accountability in the Al Jazeera journalist’s killing.

“We urge you to raise Ms. Abu Akleh’s case at the highest levels and press for accountability during your upcoming visit to Israel and the West Bank,” the senators wrote in a letter to Biden.

“We also ask for continued US participation in transparent and timely investigations into any remaining or new evidence.”