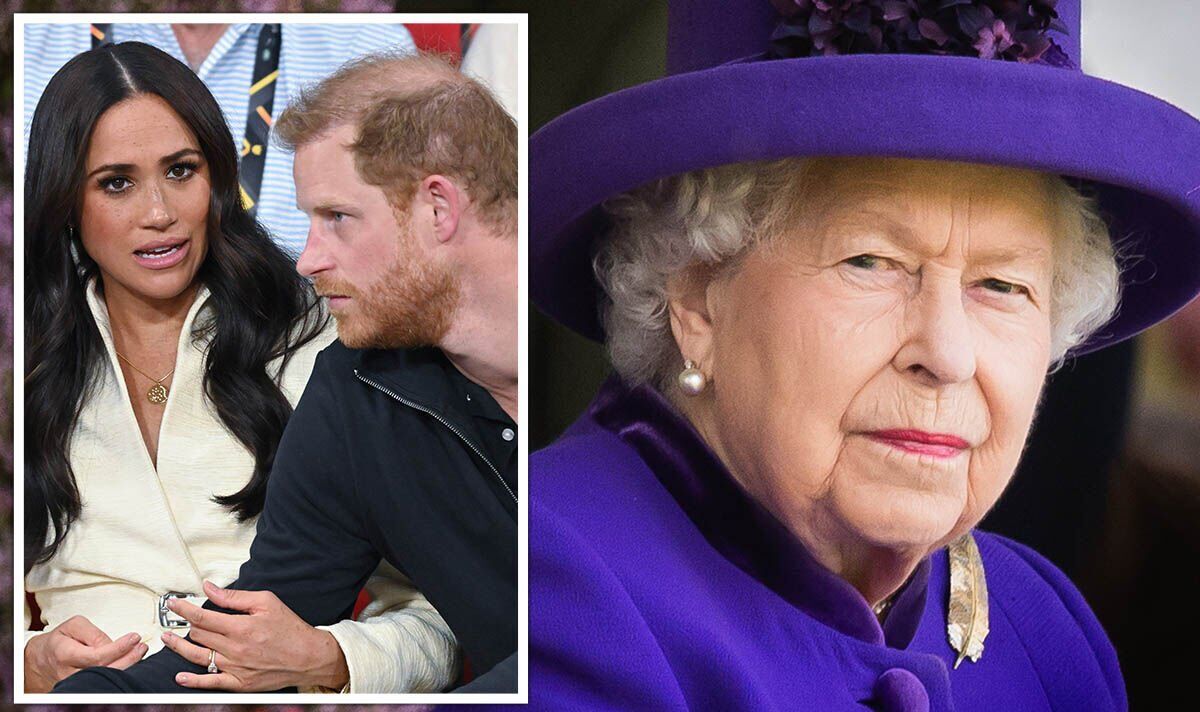 Meghan and Prince Harry sent shockwaves through the Firm on January 8 2020, when they released a statement announcing their intention to step back as full-time working royals. However, the Queen showed to still be “very much in control” and be able to react quickly to contain crises as she issued an initial statement within just a couple of hours, royal author Robert Hardman noted.

In an interview with Write Royalty website, Mr Hardman said: “I think she is very much in control.

“And these have been tough decisions of late, very personal ones.

“She has moved fast. And I think everybody, especially the Sussexes, were astonished by the speed with which she moved when the whole Megxit episode surfaced.

“When that bombshell came out at around 6pm midweek, I remember being in the office.

“And then, within two hours max, we had a response from HM.

“Pretty much within a week the issue had been resolved.

“She called together the relevant parties and they reached a decision.”

In their statement, the Duke and Duchess of Sussex announced they intended to carve a “progressive new role” for themselves within the Firm.

According to their statement, they would have split their life between North America and the UK.

They also wanted to be able to give up the Sovereign Grant and become financially independent by striking financially profitable deals while still representing the Queen through royal duties and visits.

A similar solution, however, was deemed unworkable by senior royals.

On January 18 2020, the Queen gathered her son and heir Prince Charles, Prince Harry and Prince William at Sandringham House to discuss a way forward.

The royals thrashed out a solution, later dubbed as Megxit deal, which eventually brought Meghan and Harry stepping down as working royals at the end of March 2020.

As a result of this agreement, the Sussexes can no longer carry out royal duties, had to return their royal and military patronages and can’t use their HRH styles.

However, they can now live abroad, take on whichever causes they prefer and pursue financially profitable deals.

Following the summit in Sandringham, the Queen issued another statement, in which she thanked the Sussexes for their royal work and stressed Meghan, Harry and their son Archie will “always be much loved members of my family.”

Putting an end to speculation regarding the Sussexes’ future role within the Firm, Buckingham Palace released another statement alongside Her Majesty’s, which outlined the details of the agreement.

Since bowing out of their senior roles, Meghan and Harry haven’t returned to the UK together.

The Duke of Sussex travelled back on two occasions in 2021 – first to attend the funeral of his grandfather Prince Philip in April and in late June to unveil the statue of his mother Princess Diana at Kensington Palace.

However, last week a Duke and Duchess of Sussex’s spokesperson announced they are to return to Harry’s homeland to celebrate the Queen’s Jubilee.

They said: “Prince Harry and Meghan, the Duke and Duchess of Suss are excited and honoured to attend The Queen’s Platinum Jubilee celebrations this June with their children.”

This trip will mark the first-ever meeting between the Sussexes’ daughter Lilibet ‘Lili’ Diana and the Queen, as the tot was born in June last year.

Moreover, it will give Her Majesty the chance to be reunited with Archie Harrison, who was last in the UK in November 2019.