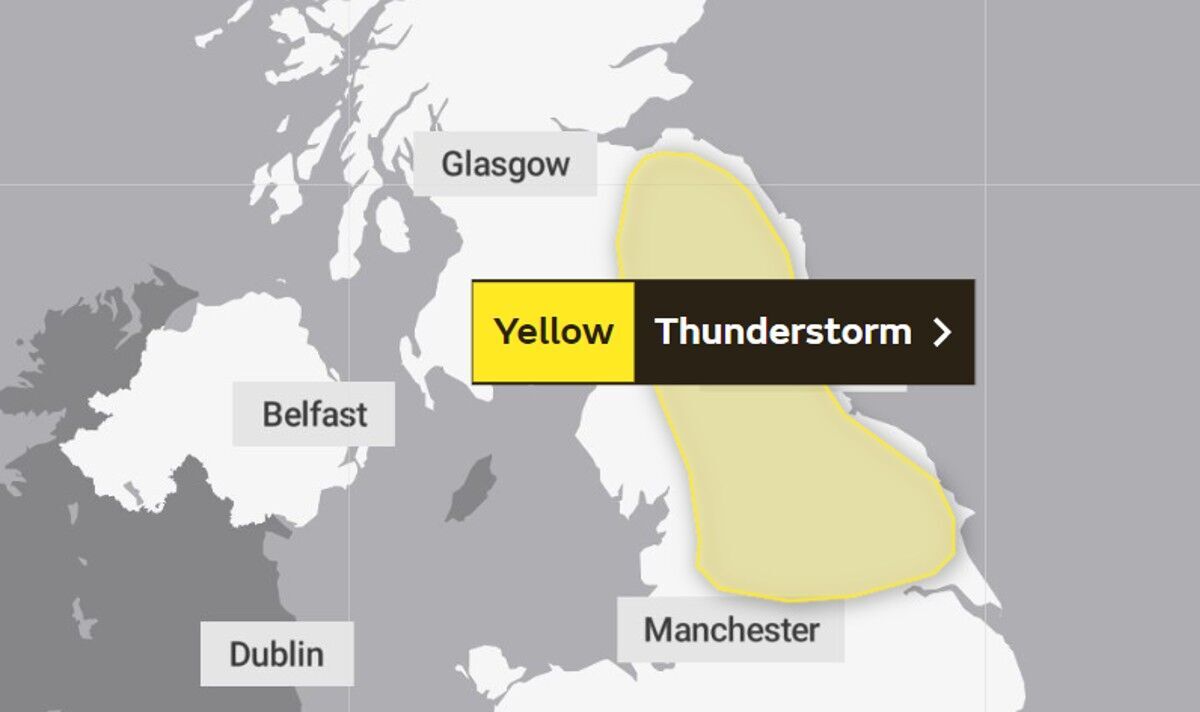 There are yellow weather warnings in for North West and North East England, as well as Dumfries, Galloway, Lothian & Borders in Scotland, running from 1pm until 10pm. The Met Office warned: “Showers and thunderstorms are likely to bring periods of heavy rain, lightning and hail in places this afternoon.” There could be “some locally torrential rain with 20-30mm possible in one or two hours” in some of the impacted areas, “and will likely be accompanied by hail in a few places”.

The Met Office added: “While many places in the warning area will remain dry, heavy showers and thunderstorms will develop today, becoming most frequent from mid-afternoon and lasting into the evening in places.

“Where these occur they are likely to produce some locally torrential rain with 20-30 mm possible in one or two hours, and will likely be accompanied by hail in a few places.”

Millions of people in the impacted areas have been warned that where flooding or lightning strikes occur, passengers on trains and buses could be hit by delays or some cancellations.

Rapid flooding is likely to lead to “difficult driving conditions and some temporary road closures”.

There is also a slight chance many could be hit by power cuts, while other services to some homes and businesses could temporarily be lost.

The Met Office said in its forecast for today: “Showers breaking out, some heavy with thunder in northeast England and southeast Scotland.

“Some sunshine too and still very warm in the east.

Netweather Senior forecaster Nick Finnis also warned of heavy showers and thunder across northern England and Scotland today, as well as a band of showers SW England and Wales later this afternoon and this evening.

He said in his forecast: “For now, a warm start for many, some early mist and low cloud across the east, but for many, a mostly dry and sunny start to Friday.

“Though some places will escape the showers and stay dry, particularly across Scotland.

“Also, a cold front moving in across the west will bring a band of showery rain across SW England and Wales later this afternoon and this evening.

“SE England and East Anglia will likely escape with a mostly dry and sunny day, just the odd shower passing through this afternoon.

“Still rather warm in the east, temperatures reaching 24-28C across eastern England, elsewhere 21-22C, though across the far west 17-19C as the cold front moves through.”