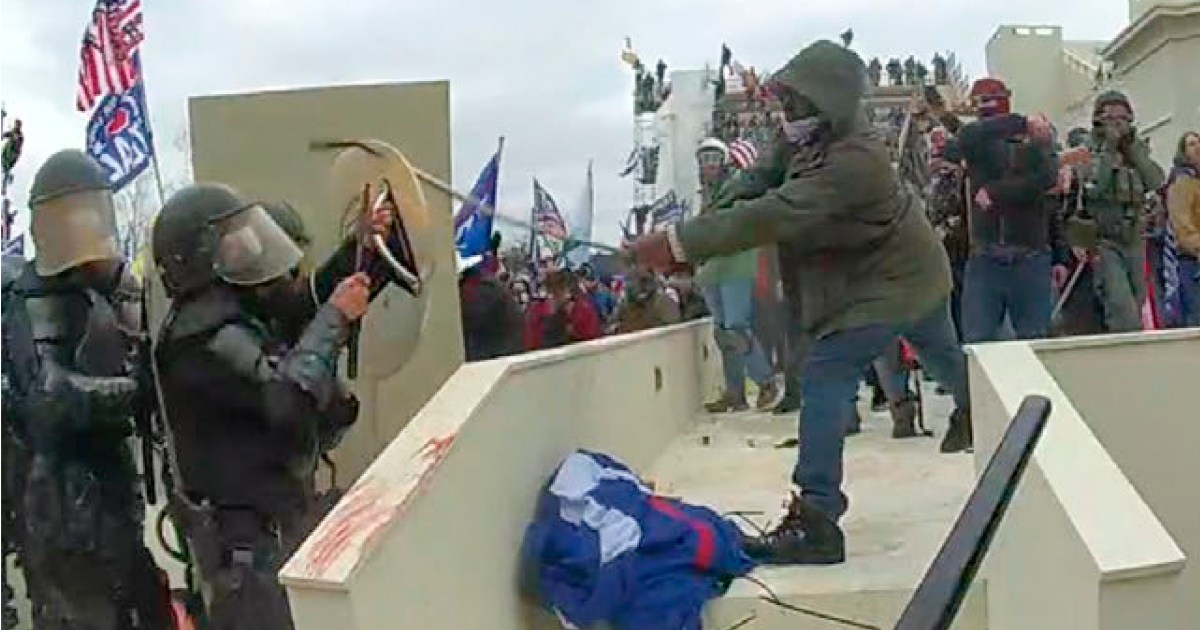 A man who attacked police officers with poles during the riot at the US Capitol was sentenced on Tuesday to more than five years in prison, matching the longest term of imprisonment so far among hundreds of Capitol riot prosecutions.

Mark Ponder, a 56-year-old resident of Washington, DC, said he “got caught up” in the chaos that erupted on January 6, 2021, and “didn’t mean for any of this to happen”.

“I wasn’t thinking that day,” Ponder told US District Judge Tanya Chutkan, asking her for mercy before she sentenced him to five years and three months in prison.

That was three months longer than the prison sentence requested by prosecutors. And it is the same sentence that Chutkan gave Robert Palmer, a Florida man who also pleaded guilty to assaulting police at the Capitol.

More than 200 other Capitol riot defendants have been sentenced so far. None received a longer prison sentence than Ponder or Palmer.

Chutkan said Ponder was “leading the charge” against police officers trying to hold off the mob that disrupted Congress from certifying President Joe Biden’s electoral victory.

“This is not ‘caught up’, Mr Ponder,” she said. “He was intent on attacking and injuring police officers. This was not a protest.”

Chutkan has consistently taken a hard line in punishing Capitol rioters. She has handed down terms of imprisonment to all 13 riot defendants who have come before her, matching or exceeding the Department of Justice’s sentencing recommendation in every case, according to an Associated Press review of court records.

Prosecutors had recommended a five-year prison sentence for Ponder, who has been jailed since his arrest in March 2021.

In April, Ponder pleaded guilty to an assault charge punishable by a maximum sentence of 20 years in prison. Federal sentencing guidelines called for a prison term ranging from nearly five years to just under six years, but Chutkan was not bound by those recommendations.

More than 100 police officers were injured during the riot.

Defence lawyer Joseph Conte said Ponder was “caught up in the madness that was January 6”. Conte asked for a sentence below the guidelines range.

Ponder swung a pole at a Capitol police officer on the Capitol’s West Plaza, breaking it against the officer’s shield. After retreating into the crowd, Ponder grabbed a sturdier pole coloured in red, white, and blue stripes. He used it to assault two other officers, hitting one of them in the left shoulder, before police detained and handcuffed him.

Outnumbered officers released Ponder because they could not get a police vehicle to transport him. They told him to leave the Capitol, but Ponder stayed and joined a mob of rioters clashing with police at a tunnel.

Capitol Police Sergeant Aquilino Gonell, one of the officers assaulted by Ponder, said the force of Ponder’s blow shattered his shield.

“It was horrific,” Gonell said during Ponder’s sentencing hearing. “That particular day will impact me for the rest of my life.”

After his arrest, Ponder told FBI agents that he typically supports police but viewed the officers as “part of the problem” that day.

“At some point in time, the way this country is going, you gonna have to pick a side,” he said, according to prosecutors.

Ponder attended the “Stop the Steal” rally on January 6 to hear then-President Donald Trump’s speech and to “peacefully protest the results of the election and the lack of attention to alleged voting irregularities,” Conte wrote in a court filing.

“He did so with no intent to do anything but add his voice to the vocal protests over the injustice he perceived had happened in the election,” the lawyer added. “Unfortunately, he got caught up in the riotous atmosphere of the crowd and erroneously perceived the police as standing in the way of the crowd’s desire to protest the election results.”

Ponder has a substantial criminal record spanning three decades, including a 2008 conviction for bank robbery, according to prosecutors.

More than 840 people have been charged with federal crimes for their conduct at the Capitol on January 6. More than 350 riot defendants have pleaded guilty or been convicted by a jury or a judge after trials.

More than 220 of them have been sentenced, including approximately 100 who received a term of imprisonment. Ponder is the 15th to be sentenced to a prison term exceeding one year.

The prison sentences for Ponder and Palmer may not be the lengthiest for much longer. Prosecutors are seeking a 15-year prison sentence for Guy Reffitt, a Texas man who was convicted of storming the Capitol with a holstered handgun. US District Judge Dabney Friedrich is scheduled to sentence Reffitt on Monday.