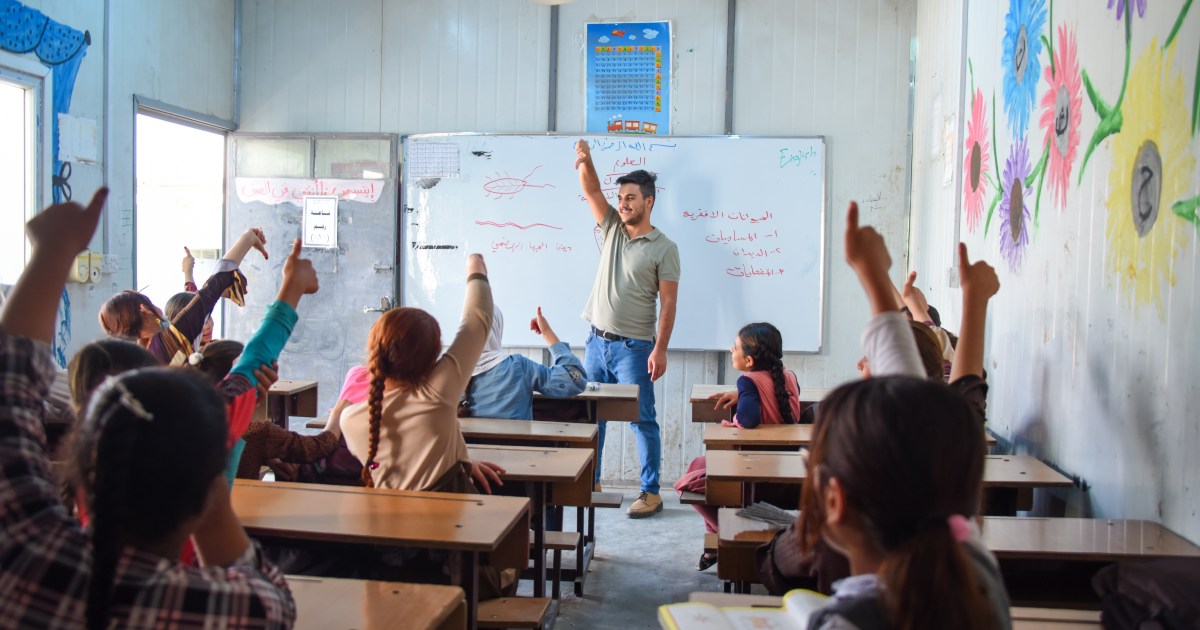 As Mosul marks five years since its liberation from ISIL (ISIS) occupation, children and youth are still struggling through a strained school system and difficulty in finding work in Iraq’s second biggest city.

Thousands of students are studying in schools that still require rehabilitation following the urban operation to retake the city, classrooms are overcrowded with inadequate teachers, and children are being sent to school without books or stationery.

A major factor affecting the capacity of students to learn and succeed in Mosul is the three to four years of school they missed during the period ISIL controlled the city, between 2014 and 2017.

Iraqi government guidelines stipulate students should be enrolled in classes appropriate to their age rather than their educational attainment, meaning that children who have missed years of schooling have faced extra pressure since their return to the classroom.

Like many teenagers in Mosul, Riad Mohamed Khalaf’s 15-year-old son Radwan has been failing exams for multiple years. Riad blames the three grades that Radwan skipped during ISIL’s control of Mosul.

On his return to school, Radwan was placed in the fifth grade. But, having failed two end-of-year exams, and only passing one, he has only moved up to the sixth grade.

“I would have preferred that he was never moved up when he first re-entered school,” Riad told Al Jazeera.

Riad and many other parents point out the contradiction of their children being told to skip grades when returning to school after ISIL’s fall, only to be then held back after failing exams, making them older than their classmates.

Riad has had to pay for a private tutor three days a week to help Radwan with his Arabic language classes, placing extra financial stress on the family.

“A solution would be for the Ministry of Education to provide summer schools where those children can catch up on previous classes [instead of] spending their summer vacation of four months doing nothing, then when they return … they have forgotten everything,” Khalil said.

Educational issues have been evident in Mosul for many years, but no solid action has been taken to advance the experience of children, teachers or parents.

“We haven’t seen any improvement or change since the city was retaken and no efforts from the government to solve these issues,” Khalil added.

The Iraq Ministry of Education did not respond when asked to provide comment.

Riad has also been concerned with what he described as inexperienced and untrained teachers at the school his son attends.

According to the World Bank, only 9.7 percent of Iraq’s budget is spent on education, which falls far below the regional average of 14 percent.

This is translated into low wages for teachers and overcrowding.

At Halab Primary School for Boys, some classes have up to 100 students per teacher.

“A teacher cannot control a classroom with that many students,” Khalil said.

Tabarak Ali Hussein, 18, goes to school in West Mosul, and believes the education she received before the conflict was better.

“I was doing very good back then but now it’s different, I find it difficult to understand the lessons because the class is crowded and the teacher can’t answer everyone’s question,” she said, adding they cannot separate the class into two because of a shortage of classrooms.

Repairs still need to be made to 185 schools, according to the Norwegian Refugee Council (NRC).

There are 12 classrooms in Khalil’s school and four prefabricated buildings, known locally as “caravans”, for more than 1,500 students, many of whom have not been provided with enough books.

A lack of opportunities

The children of Mosul have faced many challenges in the early stages of their lives, such as displacement and witnessing traumatic events in an active conflict zone, which has also affected their mental health.

According to the NRC’s Iraq policy and advocacy adviser, Caroline Zullo, schoolteachers do not have the training or resources to address these mental health issues.

“They can definitely detect children having difficulty paying attention or that they have outbursts of anger or sadness but they don’t know how to respond to it,” Zullo said.

“This is exacerbated by the fact that most teachers have an average of 80 students in a classroom, so there’s no way to provide that personalised care.”

The discouragement brought from learning without the required materials as well as the frustration for students who cannot read and write, or understand the subject matter in class, has led to many wanting to drop out of school.

The dropout rate has reached 20 percent in one school in Mosul, the NRC says.

And even if they do stay on, many schoolchildren feel that they have no job opportunities waiting for them once they finish.

Mona Abdul Karim, now 31, graduated from an engineering degree just before ISIL occupied the city, but even after its liberation she cannot find employment.

“After liberation, the job opportunities became greater but they became even more based on having the right connections and relations in order to get one,” Mona – who asked for her name to be changed – told Al Jazeera, adding that she had tried to find work in Erbil but was denied because she did not have a Kurdistan Regional Government residence permit.

Tabarak, who is still trying to get through school, is willing to continue studying and try to get into college, but has concerns.

“I can’t guarantee that I’ll have a job after that because we all know the situation in our country and here in Mosul, there are no job opportunities for those with a college degree,” she said.

Khalil lamented how difficult the situation is for students and even graduates in Mosul.

“I do not see a very bright future for most students in Mosul, because we have a lot of issues which have not been solved yet,” he said.