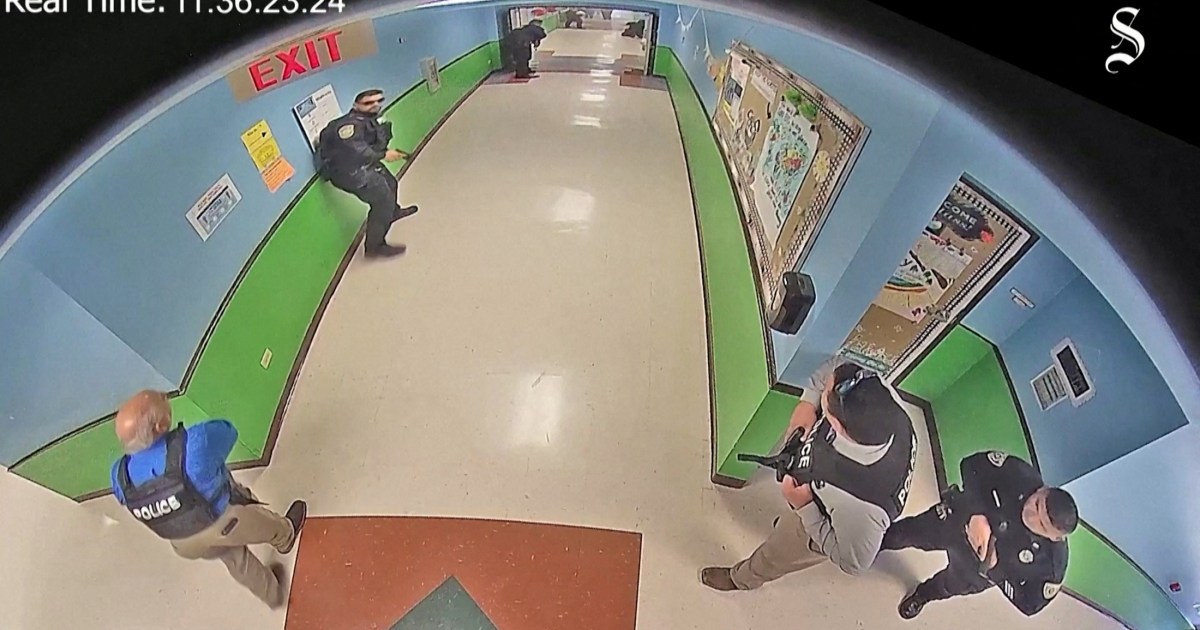 Police officers are seen arriving at the Texas school and taking cover; another 77 minutes go by before they storm the classrooms and exchange fire with the shooter.

A Texas newspaper has posted a video of United States police and federal agents responding to a deadly shooting in May at an elementary school in the town of Uvalde.

The footage published on Tuesday showed police waiting for more than an hour before breaching a classroom where a gunman killed 19 children and two teachers.

The video, posted by the Austin American-Statesman on its website, showed the 18-year-old gunman, Salvador Ramos, crashing his pickup truck and entering Robb Elementary School carrying a semi-automatic rifle. The sound of gunfire is then heard for more than two minutes.

Police officers are seen arriving minutes later. They take cover at the end of a hallway leading to the two classrooms targeted by the shooter. Another 77 minutes go by before they storm the classrooms and exchange fire with him.

The newspaper did not reveal how they got the video but published an accompanying note defending the decision to post it.

“Our goal is to continue to bring to light what happened at Robb Elementary, which the families and friends of the Uvalde victims have long been asking for,” Editor Manny Garcia said in a statement.

The attack in Uvalde was one of the latest in a string of mass shootings across the US that have renewed debate over gun laws and mental health.

Warning: Some may find the footage disturbing. Viewer discretion is advised. https://t.co/ntCs2ZFuRM

Uvalde law enforcement officials have been roundly criticised for their handling of the rampage – especially for taking a lot of time before confronting Ramos.

A report commissioned by the Texas Department of Public Safety found earlier this month that an Uvalde police officer could have shot Ramos before he entered the school but hesitated while he waited for permission from a supervisor.

Texas Governor Greg Abbott, Uvalde Mayor Don McLaughlin and a Texas legislative committee investigating the attack have called for the surveillance footage to be made public.

McLaughlin, speaking during an Uvalde City Council meeting on Tuesday, called it “wrong” and “chicken” for the newspaper to have released the video.

He said the video was not meant to be released until after victims’ families had a chance to view it and that it was meant to be edited.

“They didn’t need to see the gunman coming in and hear the gunshots. They don’t need to relive that, they’ve been through enough.”

The committee has said that Uvalde District Attorney Christina Mitchell Busbee objected to the release.

Texas Department of Public Safety Director Steven McCraw said he was “deeply disappointed” by the newspaper’s decision to publish the video. McCraw said family members of the slain and wounded should have seen it first.

Dustin Burrows, a Republican leading an investigation into the shooting, said that the video and findings from a preliminary report will be shown on Sunday in Uvalde to residents and distributed publicly soon after.