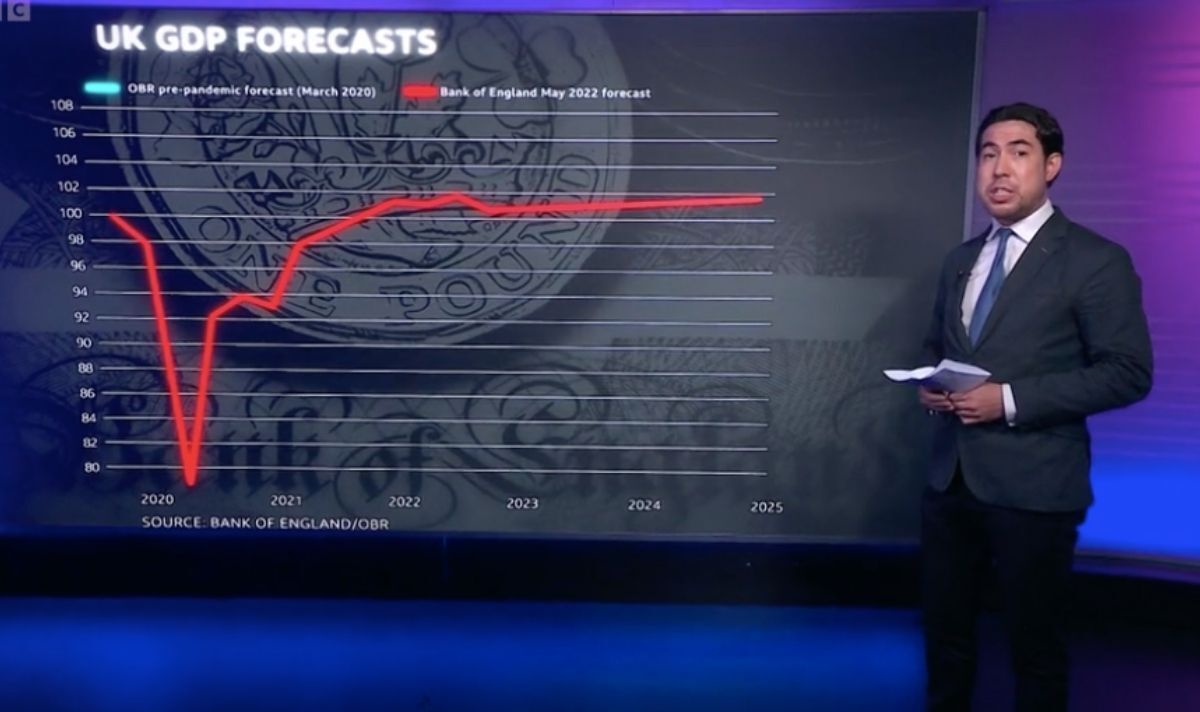 Newsnight’s Economics Editor Ben Chu analysed the policies announced in the Queen’s Speech on Tuesday to assess how they would aid economic growth and the cost of living crisis which the Tories have been accused of ignoring in the Speech. By 2025 the economy is forecast to be only one percent larger than it is today as we suffer from the “huge growth hole relative to where we expected to be in 2019”.

Mr Chu stated: “The Government chose to put the economy and generating growth at the centre of its Queens Speech legislative agenda.

“And be in no doubt, UK economic growth needs attention.”

He added: “Look at this GDP projection from the Bank of England’s latest report last week. The headlines were about us flirting with recession this year.

“But even more worrying is that it shows virtually zero growth over the next three years.”

According to a report from the Office for Budget Responsibility, the official forecaster for the Government, prior to the coronavirus pandemic it was thought the economy would be six percent bigger by 2025.

According to analysts, some bills out of the 38 which featured in the Queen’s Speech will work to boost economic growth.

The Education Bills will boost the level of skilled workers while the Energy Security Bill may “support the roll-out of essential net zero infrastructure”, according to Mr Chu.

He added: “The Brexit Freedoms Bill could help create a smarter UK regulation environment that could attract investment.

“Although of course the Office for Budget Responsibility estimates the economy will be around four percent smaller than otherwise in the long term because of the UK leaving the EU’s single market.”

Despite these long-term policies aiding growth, the strain of the cost of living crisis upon families is at tipping point.

Jagit Chadha, from the National Institute of Economic and Social Research, told Newsnight: “It is very hard to understand how families who suddenly have bills in excess of their household income can be helped by an agenda that could affect trade and level of education for five years down the line…but it will not help families this year who are facing drastic financial crisis.”

DON’T MISS:
Brexit POLL: Should Truss rip up protocol and unshackle UK from EU? (POLL)
Flight attendant explains ‘how to ask’ for free upgrade – ‘I’d give’ (INSIGHT)
Fury as state pension could be axed: ‘Pension is not a benefit!’ (REVEAL)

Labour leader Sir Keir Starmer accused the Tory Government of failing badly and said “a Labour Government would tackle the cost of living crisis head on”.

“Yet, for many UK households the medium-term feels a long way off.

“The priority is simply getting through this year.”