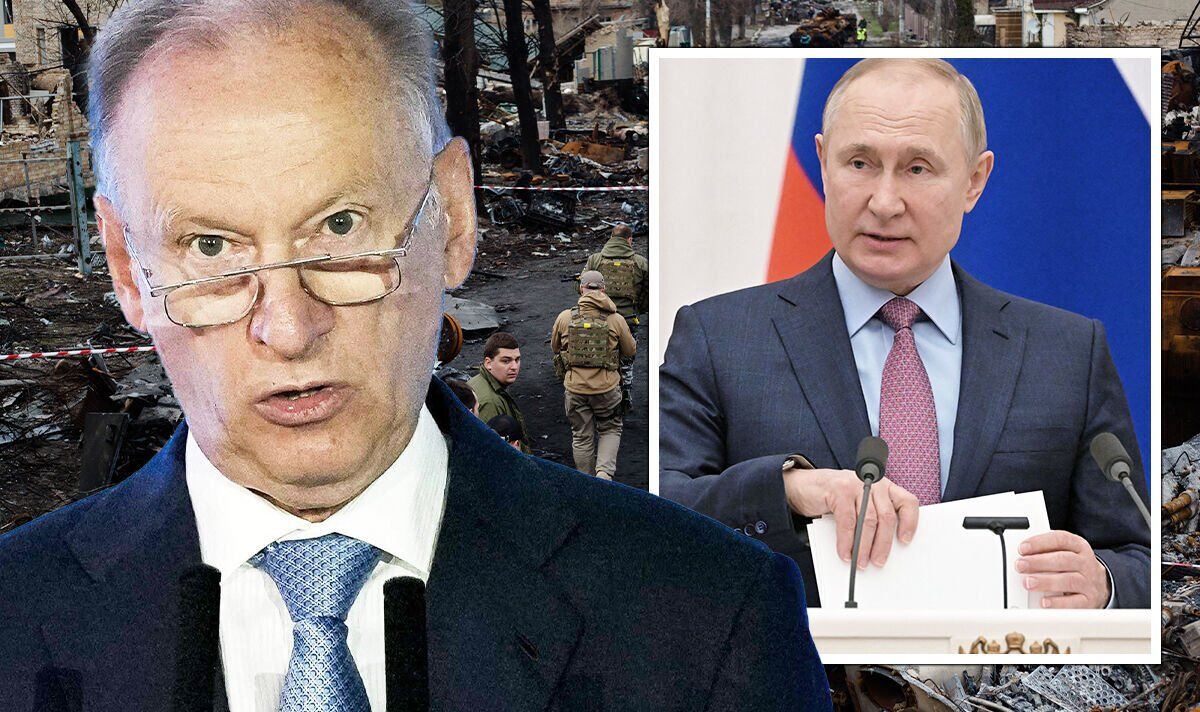 Russia’s invasion of Ukraine continues to suffer setbacks as Moscow endured another battlefield defeat this week. Satellite images show how Ukraine’s forces thwarted Russia’s attempt to cross a river in Donbas, destroying dozens of vehicles and inflicting heavy casualties. This is just the latest in a long line of developments emerging from Ukraine in recent weeks. While consensus agrees that Russia has suffered far greater losses than Putin will admit, the most disturbing accounts are emerging from civilian zones in Ukraine, with horrific details of rapes, cold-blooded murders and mass graves among the most upsetting.

And worryingly, the man tipped to take over from Putin – who, despite Kremlin denials, is said to be in poor health and will soon take a break to have an operation – is equally, if not more, unhinged.

Rebekah Koffler, a former DIA intelligence officer, said Nikolai Patrushev, already known as Putins ‘right-hand man’ and soon-to-be temporary replacement, could take over as the next president of Russia when the time comes.

Patrushev – a Russian politician, security officer and intelligence officer – has served as the secretary of the Security Council of Russia since 2008.

He previously served as the director of the Federal Security Service from 1999 to 2008.

Ms Kofler, the author of Putin’s Playbook: Russia’s Secret Plan to Defeat America, said Patrushev “rivals Putin as a villain” and is “more barbaric than his master.”

Writing for the New York Post, she said: “Both men have likely authorised the poisonings and killings of many Russian ‘enemies.”

She added: “There’s an old Russian saying. Literally translated, it means: ‘Two boots make a pair’. And Putin and Patrushev fit together perfectly.”

As a result of Putin’s invasion of Ukraine, the Russian President has been condemned by unexpected voices.

Oleg Tinkov is one of Russia’s best known entrepreneurs and one of the most high profile Russians to publicly call out the actions of Mr Putin.

He posted on social media that 90 percent of Russians were against the war in Ukraine and added “morons in any country are 10 percent”.

Mr Tinkov wrote in Russian: “I don’t see a SINGLE beneficiary of this insane war! Innocent people and soldiers are dying.

“Waking up with a hangover, the generals realised that they have a shit army.

‘Do nothing!’ Ex-Navy officer warns of West response to Putin nuke

“And how will the army be good, if everything else in the country is s***ty and mired in nepotism, sycophancy and servility?

“Kremlin officials are shocked that neither they or their children will be off to the Mediterranean in the summer. Businessmen are trying to save the rest of their property.”

Further into the post, Mr Tinkov switched to English, and appealed directly to the West.

He wrote: “Dear ‘collective West’ please give Mr Putin a clear exit to save his face and stop this massacre. Please be more rational and humanitarian.”

Another oligarch, Mikhail Fridman, broke ranks with the Kremlin and called for an end to Russia’s war in Ukraine in March.

Mr Fridman said: “My parents are Ukrainian citizens and live in Lviv, my favourite city. But I have also spent much of my life as a citizen of Russia, building and growing businesses.

“I am deeply attached to Ukrainian and Russian peoples and see the current conflict as a tragedy for them both.

“This crisis will cost lives and damage two nations who have been brothers for hundreds of years. While a solution seems frighteningly far off, I can only join those whose fervent desire is for the bloodshed to end.”