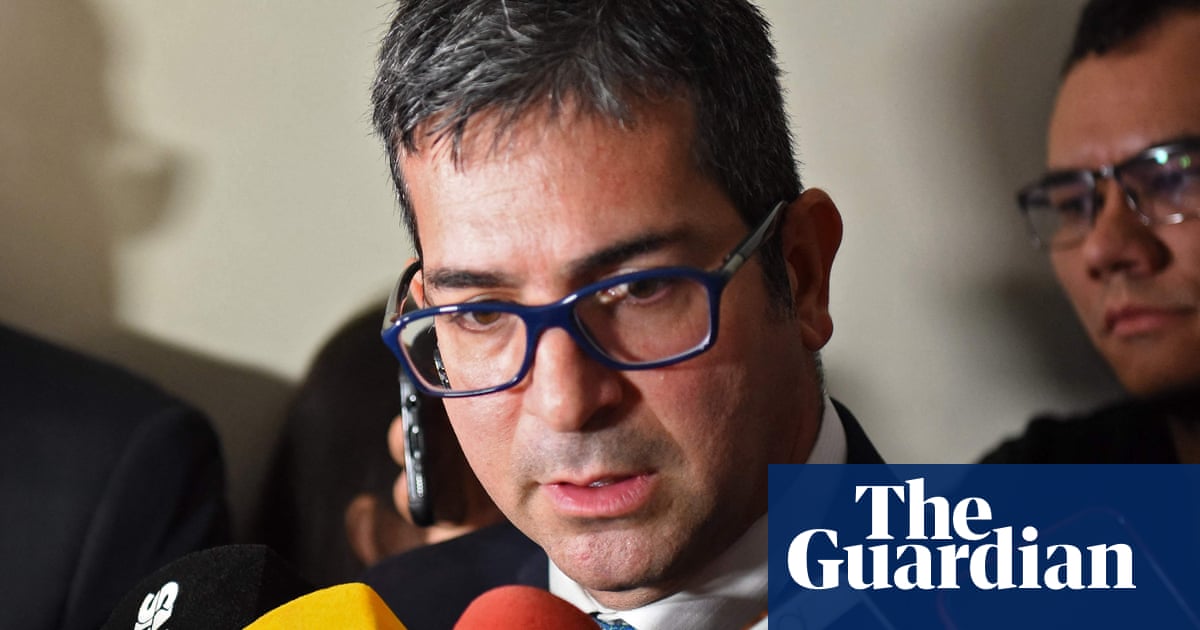 A Paraguayan public prosecutor who led a string of high-profile cases against organised crime and drug trafficking has been shot dead as he honeymooned on a Colombian beach.

Marcelo Pecci married Claudia Aguilera, a well-known journalist, on 30 April and they were spending their honeymoon at a hotel on the Barú peninsula on Colombia’s Caribbean coast.

The two attackers arrived at the hotel’s private beach by jetski, according to Aguilera, who was not hurt in the attack. One of them approached and “without saying a word shot Marcelo twice, once in the face and once in the back”, she said.

Hours before the attack, Aguilera had posted the news of her pregnancy on social media. “The final sunset in Barú, but we’ll have millions more together,” she wrote.

The killing caused shock and consternation in Paraguay – which has seen a surge in contract killings linked to the growing power of organised crime – and in Colombia, where many worried it presaged a return to the darkest moments of the country’s history, when drug lords such as Pablo Escobar could order brazen murders of public officials.

Colombian police offered a reward of 2bn pesos (£400,000) for information leading to the capture of the attackers. Grainy CCTV images and an artist’s impression shared by police showed one of the suspects wearing a black long-sleeved T-shirt, black shorts and a panama hat.

Police said footage from the hotel revealed that the gunmen had surveyed the hotel before carrying out the killing.

Paraguay’s president, Mario Abdo Benítez, also condemned the “cowardly” murder, saying the “entire Paraguayan nation is in mourning” and that Paraguay would “step up our commitment to fight against organised crime”.

Pecci, 45, had worked on several recent high-profile cases of contract killings in Paraguay. He notably led an investigation into the shooting of a drug trafficker, Marcos Rojas Mora, in a crowd of 20,000 people at a music festival in the town of San Bernardino in January. A bystander, Cristina “Vita” Aranda, a well-known social media influencer, was also killed in that attack.

Paraguay has seen a sharp increase in the number of paid killings as it becomes more important on drug-smuggling routes, and as organised crime groups such as Brazil’s First Capital Command and Red Command gangs expand their influence.

In addition to being the region’s biggest marijuana producer, Paraguay is now the main route for Bolivian cocaine being moved and processed on the way to Europe.

Pecci was also at the heart of a series of operations against drug trafficking groups that led to the confiscation of large amounts of cocaine and marijuana. Most recently he formed part of an ongoing operation against a large drug-smuggling network moving cocaine through Paraguay towards European ports.

Zully Rolón, the head of Paraguay’s anti-drug secretariat, described the operation – know as “At All Costs Paraguay” – as the biggest operation against drug money laundering in the country’s history.

As well as leading to numerous arrests and the confiscation of planes and luxurious yachts, the operation has highlighted the strong links between organised crime and high-profile politicians.

Despite Pecci’s high-profile work, Aguilera said he had not received any death threats. However, a friend of Pecci’s, Sebastián Acha, a former congressman, was reported as saying a black SUV had attempted to intercept the public prosector’s vehicle on the day of his wedding in Asunción, Paraguay’s capital.

Public prosecutor Belinda Bobadilla, the vice-president of the Paraguayan Public Prosecutors Association, told the Guardian that Pecci’s murder had sent deep shockwaves through the country and its institutions.

“We’ve made a commitment as an institution – as Marcelo’s long-time colleagues – to come out of this situation even stronger in honour of the bravery and courage he always displayed.”

Bobadilla said that Pecci’s murder was “a clear display that organised crime groups, drug traffickers, are taking reprisals against agents who investigate this type of crime”.

“The fact this happened [in Colombia] is sending a message across all of South America that people who run investigations with integrity can suffer the same fate,”she said.