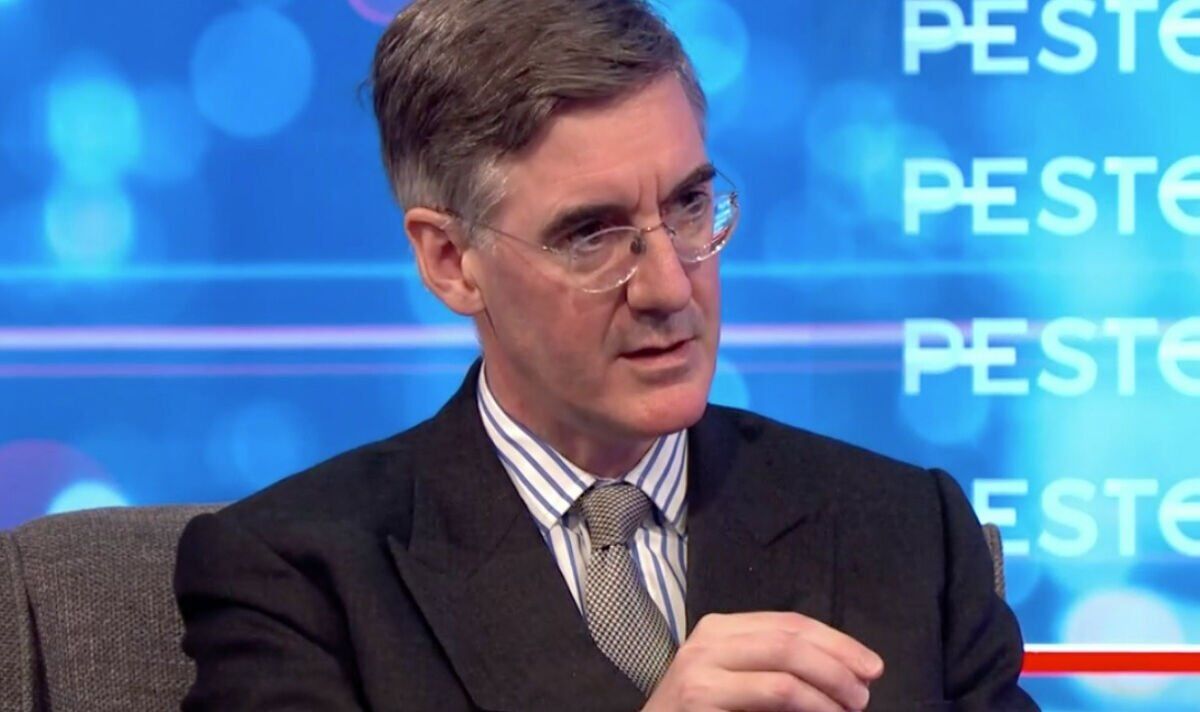 The United Kingdom could face a trade war with the European Union as Government Ministers prepare to override parts of the Northern Ireland Protocol. However, Jacob Rees-Mogg told ITV’s Robert Peston that prices in Brexit Britain would not increase as the Government is “unlikely” to impose new duties on EU goods. The cost of living crisis has gripped Brits as inflation hit seven percent in March and energy bills soared by £693 after the price cap was lifted in April.

The Bank of England has responded to the inflation increase by hiking interest rates to one percent in May.

Threadneedle Street also warned that the UK could see a contraction of 0.25 percent in 2023, down from its previous 1.25 percent growth estimate.

Mr Peston then interjected to challenge the Cabinet Office Minister and suggest Brussels could put “more restrictions” on goods from Britain.

The Brexit-backing North East Somerset MP responded: “They’re not going to stop selling to us and we have decided actively not to put more controls on July 1 to keep prices down.”

He added: “Tit-for-tat retaliation of that kind is the economics of the school ground and it would damage British consumers at a time of rising prices.”

ITV’s political editor even asked Mr Rees-Mogg if the EU could do as they pleased as the UK appeared reluctant to respond.

But the ex-Leader of the Commons replied: “What you’re saying is, does the European Union, in the midst of a global crisis in terms of inflation rising, wish to damage its own consumers.

JUST IN: Boris signs major deal with Sweden and Finland in fierce warning to ‘tyrant’ Putin

“If that’s what EU politicians want to do then that is a matter for them but there are processes within the TCA that allow for appeals to be made, for investigations to be made, there is a proper process to follow.”

He also suggested that suspending the TCA would require unanimity across the 27 EU member states.

When asked by Mr Peston whether the Government were to blame for the “constitutional crisis” in Ulster, Mr Rees-Mogg said: “Well, bear in mind the Brexit deal itself provides for the terms of the Northern Ireland Protocol to be updated.

“So, that was in there when we signed it.

“We signed up in good faith to this as something that was an immediate fix that would be further negotiated.

“We have been further negotiating it in good faith and have not made satisfactory progress and that is the issue we face at the moment.

“But that is completely in line with the commitments we’ve made, the expectations we’ve made and the deal that we did and the British Government has behaved in good faith the whole way through.”

READ MORE: ‘What we wanted all along!’ EU could’ve avoided Brexit if Macron plan offered to Cameron

Unionists suggest the Protocol, which was agreed by Boris Johnson and Lord David Frost, poses a constitutional threat to the UK as they claim the border down the Irish Sea has separated Northern Ireland from Great Britain.

Loyalist opposition to the Protocol in Ulster has helped see a rise in support for the hardline Traditional Unionist Voice at the expense of the Democratic Unionist Party.

However, it has even been estimated that the border down the Irish Sea could have cost Northern Ireland £850million a year.

According to the Northern Ireland Statistics and Research Agency, £10.9billion out of Ulster’s £22.1billion exports and £13.2billion out of £20.3billion imports went to the rest of the UK in 2020.

The Government received a boost last night after it was reported that the Attorney General had approved scrapping large parts of the Protocol.

Article 16, which has been unilaterally enacted to “safeguard” either signatory, can be triggered if the Protocol leads to serious “economic, societal or environmental difficulties”.

This can also include a “diversion of trade”.

Suella Braverman, who chaired the European Research Group from 2017 to 2018, concluded that Brussels’ implementation of the Protocol was “disproportionate and unreasonable”.