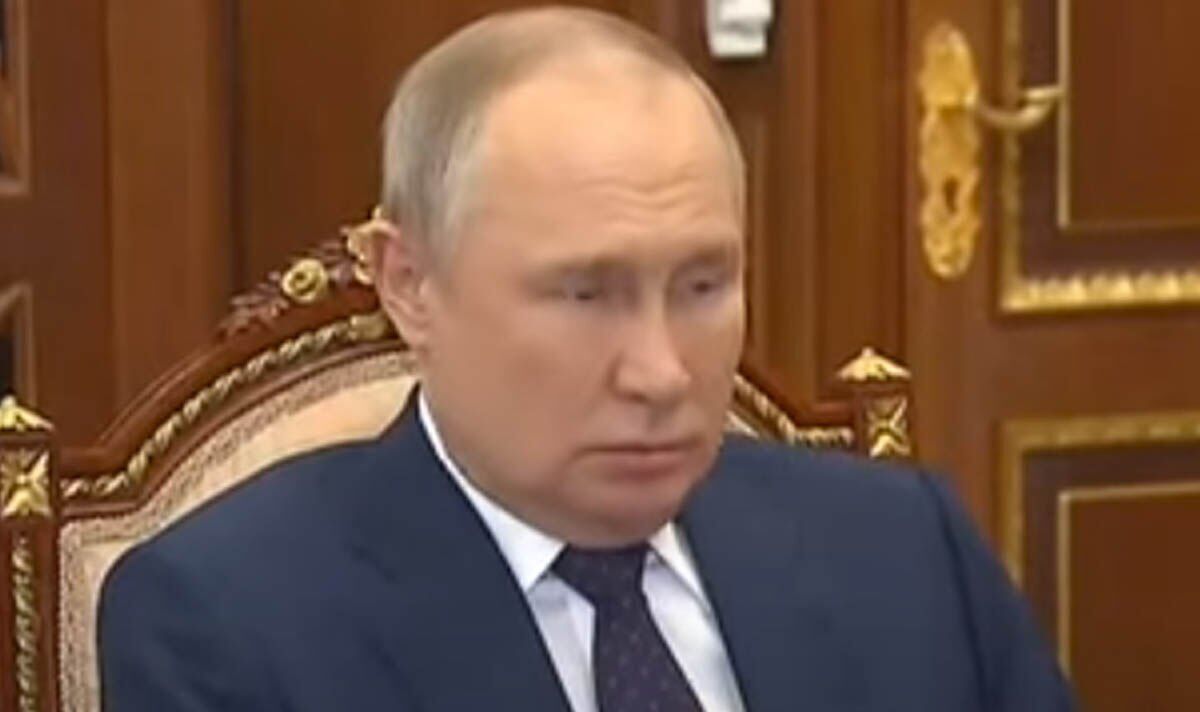 The Russian leader appeared to retch and splutter through the televised meeting on Wednesday which sparked fresh fears he is fighting an illness. Putin, 69, sat opposite Chemezov in his latest appearance amid claims he could be sick. In the clip, the bloated leader also gripped the table.

An anti-Putin channel on the messaging app General SVR, which is reportedly run by a Kremlin insider, shared the allegations about Russia’s leader on Tuesday.

It insisted in the post that “Vladimir Putin did not hold this meeting in real-time”.

It added: “The introduction was pre-recorded and the closed part was played using computer graphics and Deepfake technology to create the illusion of Putin’s presence.”

The post went on to claim that Putin was absent on Friday due a medical procedure.

It said: “On the night of Thursday, May 12 to Friday, May 13, Putin underwent a surgical procedure to remove fluid from his abdomen.”

The claims come after a Russian oligarch suggested Putin is “very ill with blood cancer”.

In a recording obtained by New Lines Magazine, the unnamed oligarch revealed the state of Putin’s health.

He said: “The problem is with his head.…One crazy guy can turn the world upside down.”

The businessman went on to say “we all hope” Putin dies from cancer or from a politically-motivated cause, such as a coup.

It comes as Putin appeared to climb down on Monday from Russia’s objections to Sweden and Finland joining NATO, saying Moscow had no issues with them entering the U.S.-led military alliance they now aim to join in reaction to his invasion of Ukraine.

Though the Russian leader said Moscow would take action if NATO were to move more troops or hardware onto the territory of its new members – steps Finland and Sweden have both already ruled out – he said NATO’s expansion itself was not a threat.

“As far as expansion goes, including new members Finland and Sweden, Russia has no problems with these states – none. And so in this sense there is no immediate threat to Russia from an expansion to include these countries,” Putin said.

The comments appeared to mark a major shift in rhetoric. For decades, Moscow has cast NATO enlargement as a direct threat to Russia’s security, including citing it as a justification for the invasion of Ukraine itself.

Just hours before Putin spoke, Russia’s deputy foreign minister, Sergei Ryabkov, said Finland and Sweden were making a mistake that would have far-reaching consequences: “They should have no illusions that we will simply put up with it.”

Putin’s own spokesman Dmitry Peskov, asked last Thursday if Finland joining NATO was a threat to Russia, had said: “Definitely. NATO expansion does not make our continent more stable and secure.”

But faced with the prospect that his own actions may cause the very expansion of NATO he had opposed, Putin appears to have decided not to object directly.