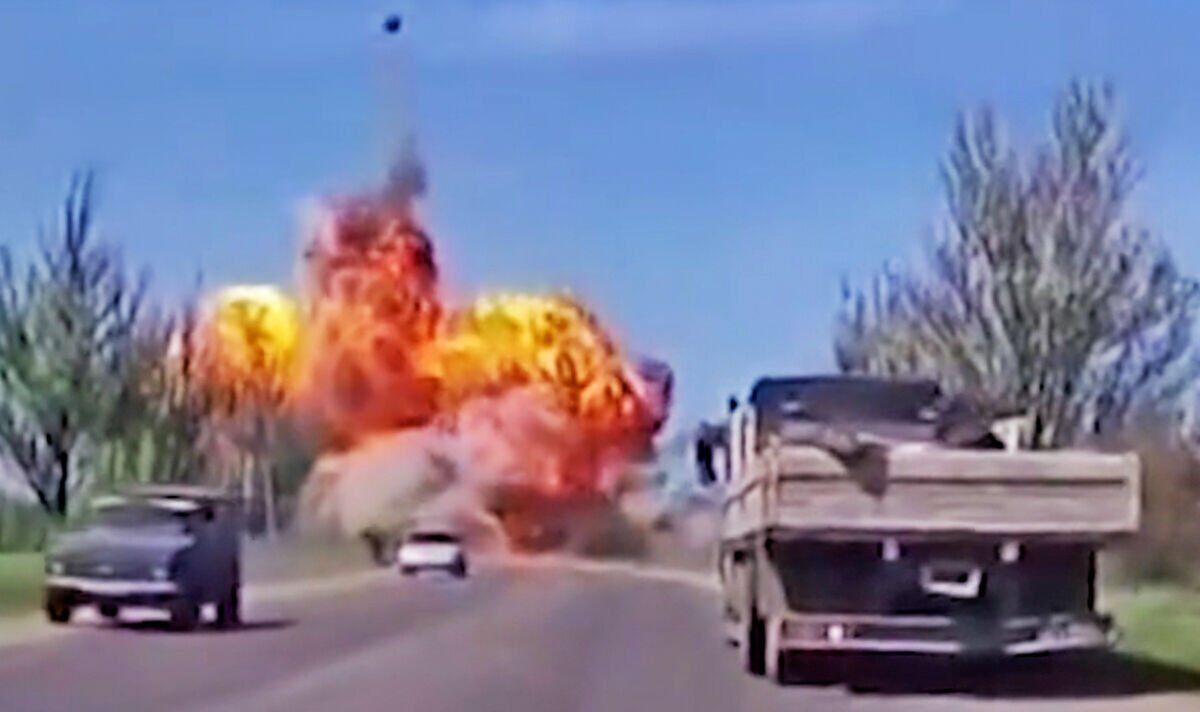 The footage, captured by Chinese state media channel Phoenix TV,  shows the Russian tank making its way along a working road. The journalists are forced to pull off an “emergency deceleration” as the tank appears to spontaneously blow up, exploding into a huge fireball, with the Ukrainian missile to quick to spot. The tank’s turret is sent 250 feet in the air as cars speed away from the strike to avoid collateral damage.

A number of what appear to be Russian soldiers flee the scene following the explosion.

The clip was shared to Phoenix TV’s Youtube Channel. The team said they were on their way to Mariupol to cover the evacuation of civilians from the Azovstal steel plant.

It added the driver needed “emergency deceleration to avoid danger”.

The footage could provide further evidence of a flaw in Russian tanks causing the turrets to skyrocket in the air and the vehicle to dramatically explode.

Called the “jack-in-the-box effect”, the design flaw is a result of multiple shells being carried with the turrets, unlike modern Western tanks that only carry one shell.

The overload means even indirect hits on the tanks can cause a chain reaction that can set off the tank’s entire ammunition stores.

The flaw more often than not ensures that the tank’s driver and two men in the turret are instantly killed, according to former British Army officer Nicholas Drummond.

Former Russian president Dmitry Medvedev warned today that Russia and NATO are at risk of “a full blown nuclear war”.

As one of President Putin’s closest allies, Mr Medvedev claimed NATO’s supply of weapons to Ukraine was forcing Russia’s hand.

He said: “NATO countries pumping weapons into Ukraine, training troops to use Western equipment, sending in mercenaries and the exercises of Alliance countries near our borders increase the likelihood of a direct and open conflict between NATO and Russia.

“Such a conflict always has the risk of turning into a full-fledged nuclear war,” Medvedev said. “This will be a disastrous scenario for everyone.”