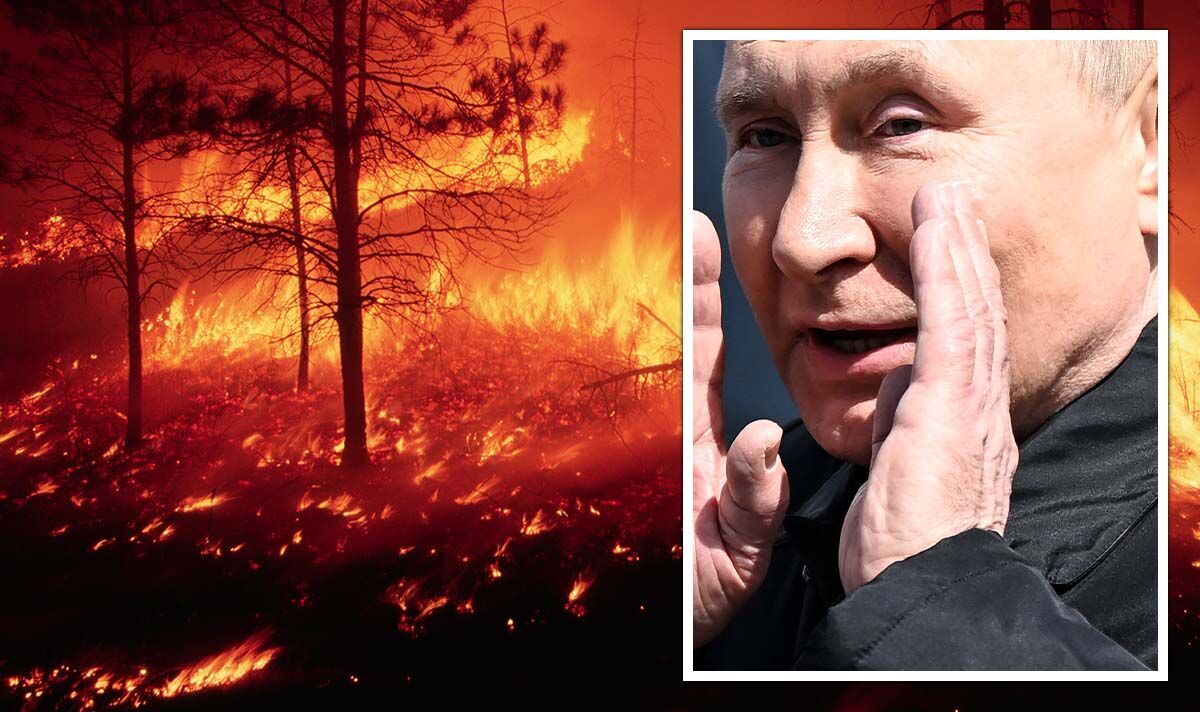 The Russian President is now scrambling to protect Russia from the blazes that he said were a massive threat to life, the environment and the economy. Addressing state TV, Putin said: “We cannot allow a repeat of last year’s situation, when forest fires were the most long-lasting and intensive of recent years.”

He added: “We need to fight fires more efficiently, systematically, consistently, and improve the quality and level of all types of prevention.”

Putin went on: “[Forests are] the ecological shield of our country and the entire planet. They play a key role in absorbing global greenhouse gas emissions, which means large-scale fires undermine our efforts to save the climate.

“This is a fundamental issue for the whole world, for our country.”

The warning comes as 4,000 forest fires since the start of the year have ripped through 270,000 hectares of Russian land, an area larger than Luxembourg, according to Acting Emergencies Minister Alexander Chupryan.

Mr Chupryan said 16 people had died in fires over the last week.

And on Saturday, at least eight people died in Siberia after blazes scorched their way through hundreds of buildings in a number of villages.

High winds reportedly made the struggle to put out the fires even harder.

According to Greenpeace Russia, 18.8 million hectares of forest were completely obliterated.

But worryingly for Russia, the NGO has warned that as of late April, wildfires were more widespread than at the same point last year.

Although the organisation did note this was still below average for recent years.

Now, Greenpeace Russia has raised the alarm over a “major fire season” that is set to ravage the country again this year.

Head of the forest programme at Greenpeace Russia, Alexei Yaroshenko, said: “Nothing has changed since last year. For now, we are likely to see another major fire season.”

Temperatures in Siberia in recent years have been alarmingly high compared to normal, including a record-breaking 38C being reached in 2020.

Russia’s Yakutia republic in Siberia has blamed the increasing wildfires on climate change, noting that the staggering temperature increases were also causing loss of permafrost.

DON’T MISS
Putin could drop tactical nuke on Ukraine TOMORROW [REVEAL]
How the UK, US and their allies could respond to a nuclear attack [INSIGHT]
Chemical weapon horror: Briton’s windpipe ‘constricted’ after exposure [REPORT]

The burning of permafrost releases vast amounts of carbon dioxide and methane emissions into the atmosphere, speeding up the rate of climate change as a result.

Russia has also been accused of leaving many of these fires burning unchecked because many of the military units responsible for dealing with them are fighting in the war against Ukraine.

Jessica McCarty, a climate researcher at the Miami University of Ohio, told the Axios website: “Because the largest fires often need military aircraft to spot and verify the satellite or community reports, [and to] support and fight in Siberia, it is questionable that this capacity will even be available during the summer if the war continues.

“So, either there will be more fires … or these aircraft and personnel will be taken away from the western front and brought to Siberia.”