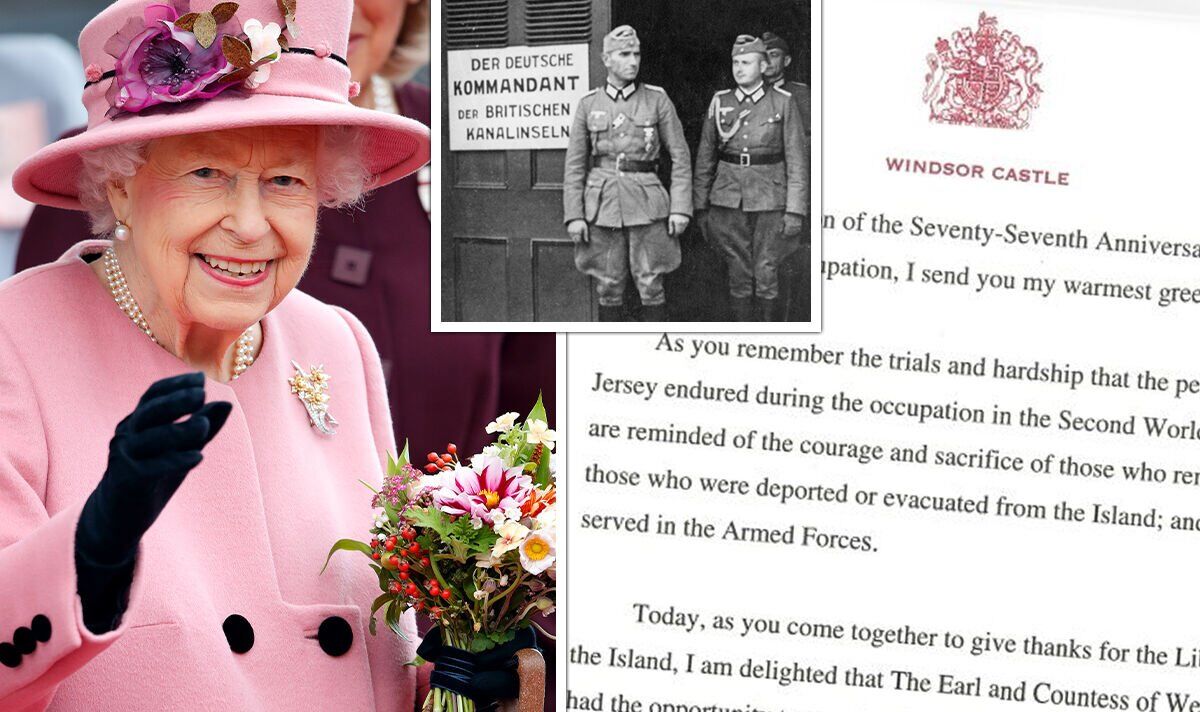 In an official message, the monarch sent her “warmest greetings” to the residents of Jersey and Guernsey. This comes as the Earl and Countess of Wessex visit the Channel Islands to commemorate the occasion.

The anniversary celebrates the islands’ liberation from Nazi occupation after they were captured by German troops on June 30, 1940.

Nazi forces retained control of the territories until May 9, 1945.

Edward and Sophie’s visit will also bring the Queen’s Platinum Jubilee celebrations to the islands, which have more than 170,499 inhabitants.

They arrived in Jersey yesterday (Sunday May 8).

They also unveiled a Jubilee Sundial and met with those who survived the occupation in Jersey.

Later, they took to the dance floor during a Liberation Tea Dance at Beau Séjour with the island’s Occupation Generation and special guests.

In a letter to the people of Guernsey, the Queen wrote: “To my most loyal people in the Island of Guernsey, I send my warmest greetings on this the Seventy-Seventh Anniversary of your Liberation from enemy occupation.

“I was interested to learn that this occasion will be commemorated and celebrated by people of all ages, from schoolchildren to islanders and Armed Forces veterans who were present at the Liberation, as well as those who were evacuated to the United Kingdom or deported to Europe.

“I am delighted that The Earl and Countess of Wessex have the opportunity to represent me on this special day in the Island’s calendar.

She added: “In my Platinum Jubilee year, I am most grateful for your continued allegiance and loyalty.

“My thoughts and prayers remain with you for your future happiness and the prosperity of your beloved island.”

In a letter to Jersey, she continued: “As you remember the trials and hardship that the people of Jersey endured during the occupation in the Second World War, we are reminded of the courage and sacrifice of those who remained, those who were deported or evacuated from the Island; and those who served in the Armed Forces.

She added: I recall my own visits with fondness and pleasure, and you always extended such a warm welcome.”

Edward and Sophie are standing in for the Queen, as the 96-year-old monarch’s ongoing health issues have prevented her from taking part in many public engagements.

There has been significant speculation over whether or not the Queen will attend the State Opening of Parliament tomorrow.

The event, which sees the Queen deliver a speech outlining the Government’s agenda, has only been missed by the Queen twice before.

While the Queen is reportedly intending to be at the event, Prince Charles would step in for the monarch if she is unable to go.