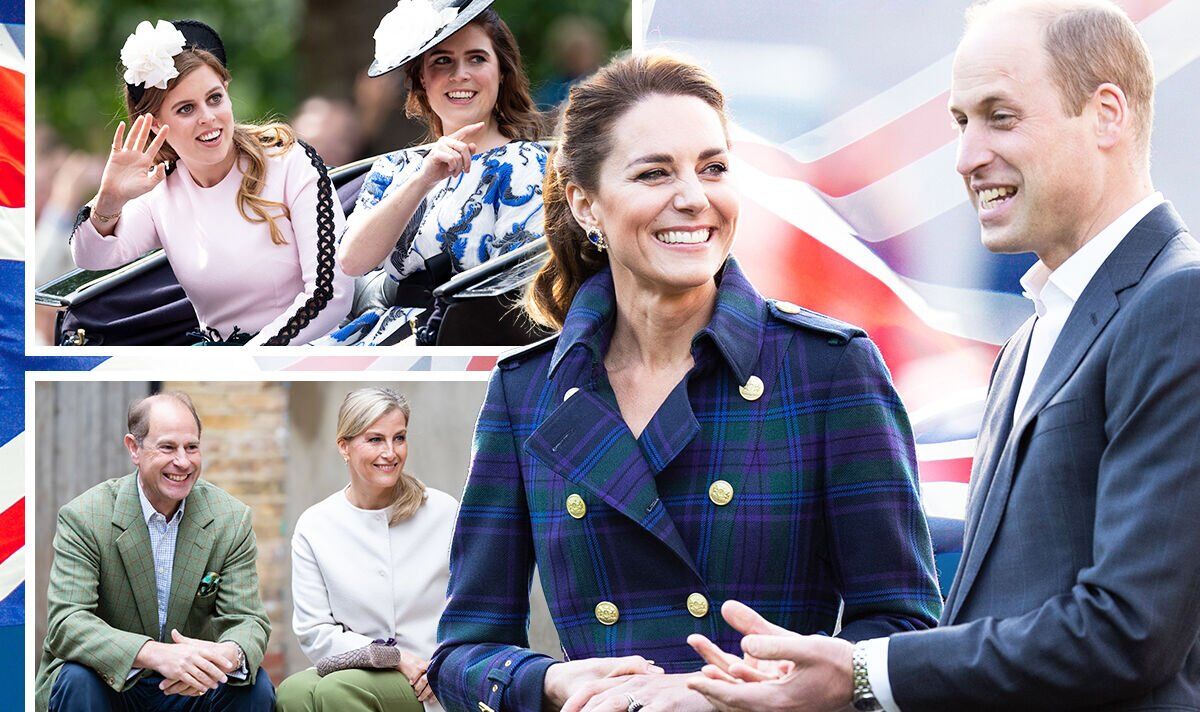 Scotland, Wales, and Northern Ireland will get their own royal visits to ensure that the Windsors spread the love across the nation over the central weekend when many of the main events are taking place in London. The Duke and Duchess of Cambridge will visit Wales, while the Earl and Countess of Wessex go to Northern Ireland, and Princess Anne heads for Scotland.

A Buckingham Palace spokesman said: “Members of the Royal Family will attend engagements in each nation, including public events marking the occasion.”

The celebrations will get underway this week at the Royal Windsor Horse Show, where the Queen and other family members, including her disgraced son Prince Andrew, are expected to attend A Gallop Through History, a special pageant marking the jubilee and the 96-year-old monarch’s lifelong love of horses, on the final night next Sunday.

It appears the crowds may be in for a treat amid unconfirmed reports that several of the Queen’s great grandchildren – including Prince George, eight, Princess Charlotte, seven, Prince Louis. four, and the children of Peter and Autumn Phillips, Mike and Zara Tindall, Princess Eugenie and Jack Brooksbank, and Princess Beatrice and Edo Mapelli Mozzi – will all ride in a horse-drawn carriage in the finale.

Buckingham Palace declined to comment yesterday, although on April 28 when footage appeared on social media of the Queen’s great grandchildren sitting in a carriage at Windsor Castle, a senior aide insisted it showed the family enjoying private time on Easter Sunday and had nothing to do with any jubilee celebrations.

Palace officials did confirm that royal events celebrating the jubilee will continue throughout the rest of the year with members of the family incorporating the commemorations into regional visits around the UK, something they have been doing since February.

It has all been on a much smaller scale, however, than 10 years ago when the Queen, now restricted to light engagements after experiencing mobility problems, and the Duke of Edinburgh visited more than 50 town and cities and London boroughs over a three-month period to celebrate the monarch’s Diamond Jubilee.

Buckingham Palace declined to say yesterday whether there would be more visits to the Queen’s overseas realms and other Commonwealth countries to mark the Platinum Jubilee after controversy over tours in the Caribbean by William and Kate as well as Edward and Sophie.

At least one more has been confirmed: Prince Charles and the Duchess of Cornwall are due to visit Canada, the Queen’s senior overseas realm,later this month. But there has been no jubilee visit so far to New Zealand, where she is also head of state but has not visited the country for 20 years.

New Zealand has only just opened up to foreign visitors after tight Covid restrictions so it is possible that a royal visit combined with one to Australia, another one of the 14 overseas realms, might happen later in the year.

In Britain the central jubilee weekend will be from June 2 to 5. Prince Harry and Meghan announced on Friday that they will be returning to the UK with their children, Archie, three, and 11-month-old Lilibet, for the celebrations.

Their announcement came after Buckingham Palace announced that the Queen had decided there would be no place for them on the palace balcony for the traditional public appearance after Trooping the Colour on June 2.

She has decided only working members of the family will be allowed on the balcony then, excluding the Duke and Duchess of Sussex and their children as well as Prince Andrew and his daughters.

A palace spokesman said: “After careful consideration, the Queen has decided this year’s traditional Trooping the Colour balcony appearance on Thursday June 2 will be limited to Her Majesty and those members of the Royal Family who are currently undertaking official public duties on behalf of the Queen.”

The Queen is expected to attend Trooping, a service of thanksgiving at St Paul’s Cathedral on Friday June 3, and a special jubilee Derby at Epsom Downs on the Saturday.

But the increasingly frail monarch, who is due to attend the State Opening of Parliament tomorrow (Tuesday), will only confirm if she feels well enough nearer to the time and often on the day itself.

A palace spokesman said: “The Queen is looking forward to the weekend and will be taking part in the celebrations but her presence will not be confirmed until much nearer the time or even on the day itself.”