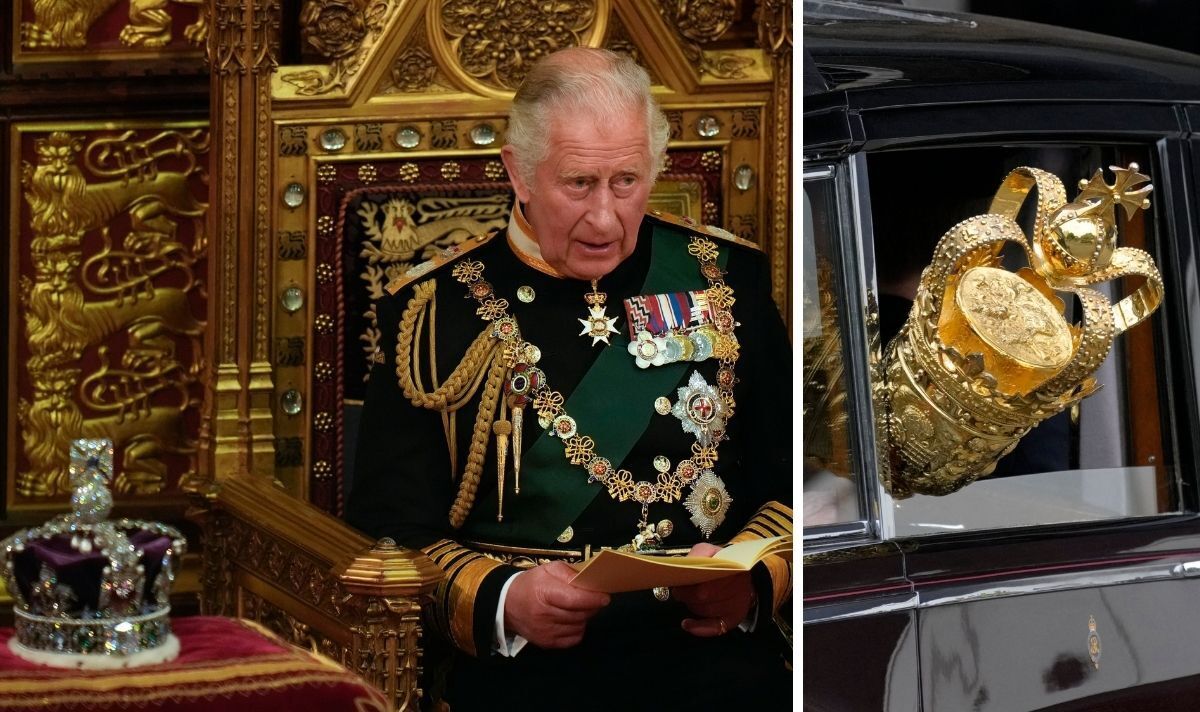 The two ceremonial maces were transported in cars from Buckingham Palace – but the items were sticking out of the window due to restricted room inside the car. In past years, carriages were used to transport the Crown Regalia. The route would be lined by military personnel from the three services while mounted officers and troopers from the Household Division of the British Army provided an escort to the House of Lords.

But the carriages were swapped for cars earlier this year to aid the Queen’s comfort.

Last night, the Queen “reluctantly” asked the Prince of Wales and Duke of Cambridge to step in for the ceremony due to her ongoing mobility problems.

The Regalia, consisting of the Imperial State Crown, the Cap of Maintenance and Sword of State, would previously have its own carriage which would be escorted by senior members of the royal household ahead of the monarch, 96.

However, ahead of Tuesday’s ceremony, two mounted divisions of the Household Cavalry formed two rows at Horse Guards Palace creating a “secure passage” so the limousine holding the royal party could travel through.

This is the first time Prince Charles has opened parliament, as he arrived with the Duchess of Cornwall ahead of the Queen’s speech.

The revised plans left the long ceremonial maces propped up against the side of the car, with the windows needing to be opened to fit them in, as they were driven through the streets of London.

Other Regalia, including the Imperial State Crown, travelled in its own car and was handed to the Comptroller of the Lord Chamberlain’s household to carry through Parliament after being inspected by the Crown jeweller.

This car was followed by another containing the Cap of Maintenance, and the Sword of State which was used at the coronation of James II.

READ MORE: ‘Chuck them all in the bin’ Ash Sarkar erupts at Royal Family ‘cartel’

Most of the present collection dates from around 350 years ago when Charles II ascended to the throne.

The Royal Collection belongs to the institution of the monarchy, passing from one sovereign to the next and when not in use, the Jewels are on public display in the Jewel House and Martin Tower in the Tower of London.

As the Prince of Wales reads his speech, the Crown will be placed on the table.