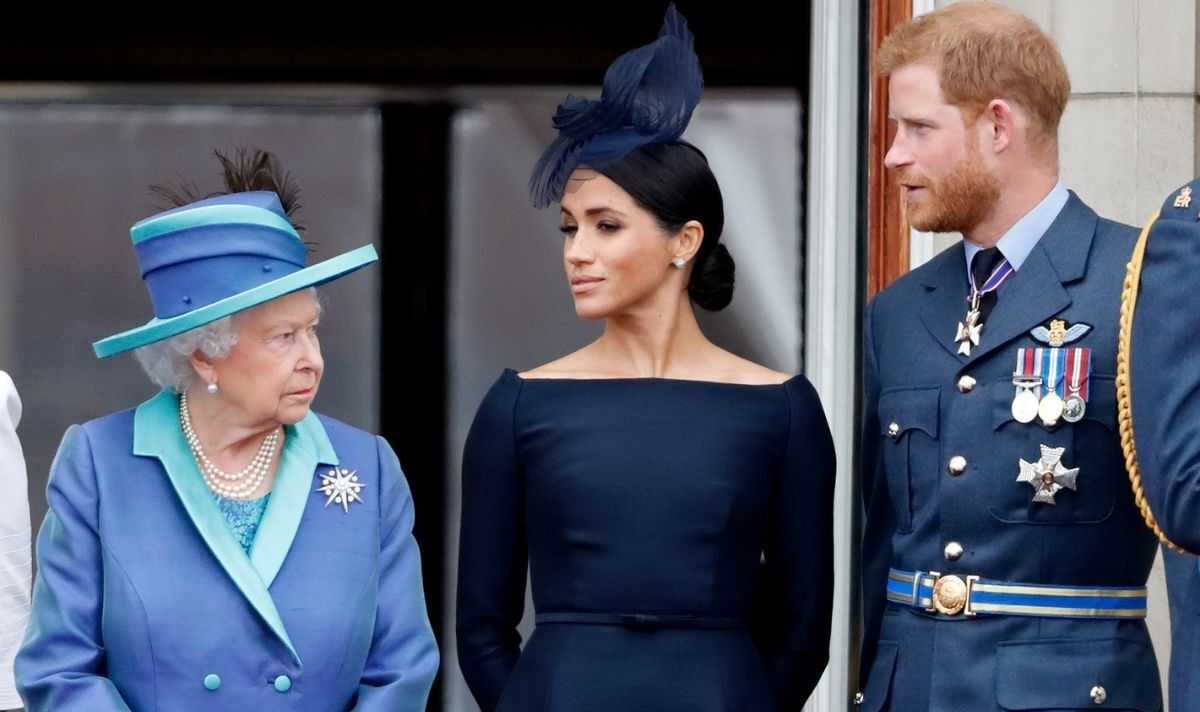 Queen Elizabeth II, 96, will celebrate her Platinum Jubilee next month to mark 70 years of her reign. Britain’s longest-serving monarch will be honoured with an exciting programme of events across an extended bank holiday weekend. The festivities from June 2 to 5 will kick off with an RAF flypast and the Trooping the Colour parade.

Would you boo Meghan and Harry if they appeared on the palace balcony?

Her Majesty and the rest of the Royal Family traditionally watch these events from the balcony of Buckingham Palace.

However, this year will be different because Harry, Meghan and Prince Andrew will not be present.

Buckingham Palace announced the new line-up on Friday, confirming that the monarch will be joined only by “members of the Royal Family who are currently undertaking official public duties”.

Andrew stepped down from his royal duties in 2019 amid the civil sexual assault case brought against by Virginia Giuffre him in the US, which both parties settled in February.

The Duke and Duchess of Sussex announced their decision to step back from their royal roles in 2020, before the Queen confirmed last year that they would not return to The Firm as working royals.

Daily Express Columnist Carole Malone has claimed that the Sussesxes would be “booed” if they appeared on the balcony.

She wrote today: “Of course, Meghan and Harry will hate the fact they’ve been lumped into the Bad Royals Box with Prince Andrew.

“Because comparisons will be made that all three of them have disgraced the Royal Family, trashed its reputation and hurt people who did nothing to deserve it.

So, what do YOU think? Would you boo Meghan and Harry if they appeared on the palace balcony? Vote in our poll and leave your thoughts in the comment section below.

“And it’s a good thing they won’t be on the balcony – it might have been the first time ever that a royal has been booed by the crowds.”

Despite not appearing on the balcony, Meghan and Harry will still travel to the UK for the Jubilee.

The Sussexes, who live in Monecito, California, will also bring their two children, Archie and Lilibet.

The couple said they were “excited and honoured to attend the Queen’s Platinum Jubilee celebrations”.

Other doubts have been raised about the celebrations, due to the Queen’s recent mobility issues.

Her Majesty has cancelled a string of engagements recently after she experienced some difficulties moving.

Her attendance at the Jubilee events is likely to be confirmed by the Palace closer to the time.

The royals who will be on the balcony include Prince Charles, Camilla Duchess of Cornwall, Prince William, Kate Duchess of Cambridge and their children.

Other royals who will attend include Prince Edward, Sophie Countess of Wessex and their children, as well as Princess Anne and her husband, Sir Timothy Laurence.

Andrew’s absence from the iconic balcony appearance comes after he returned to the royal front line last month.

The Duke of York accompanied Her Majesty to Prince Philip’s memorial service at Westminster Abbey in his first public appearance since the settlement.

The Queen’s son was by her side as he walked her down the aisle and helped her to her seat.

The gesture was widely viewed as a major show of support by the Queen for her son.