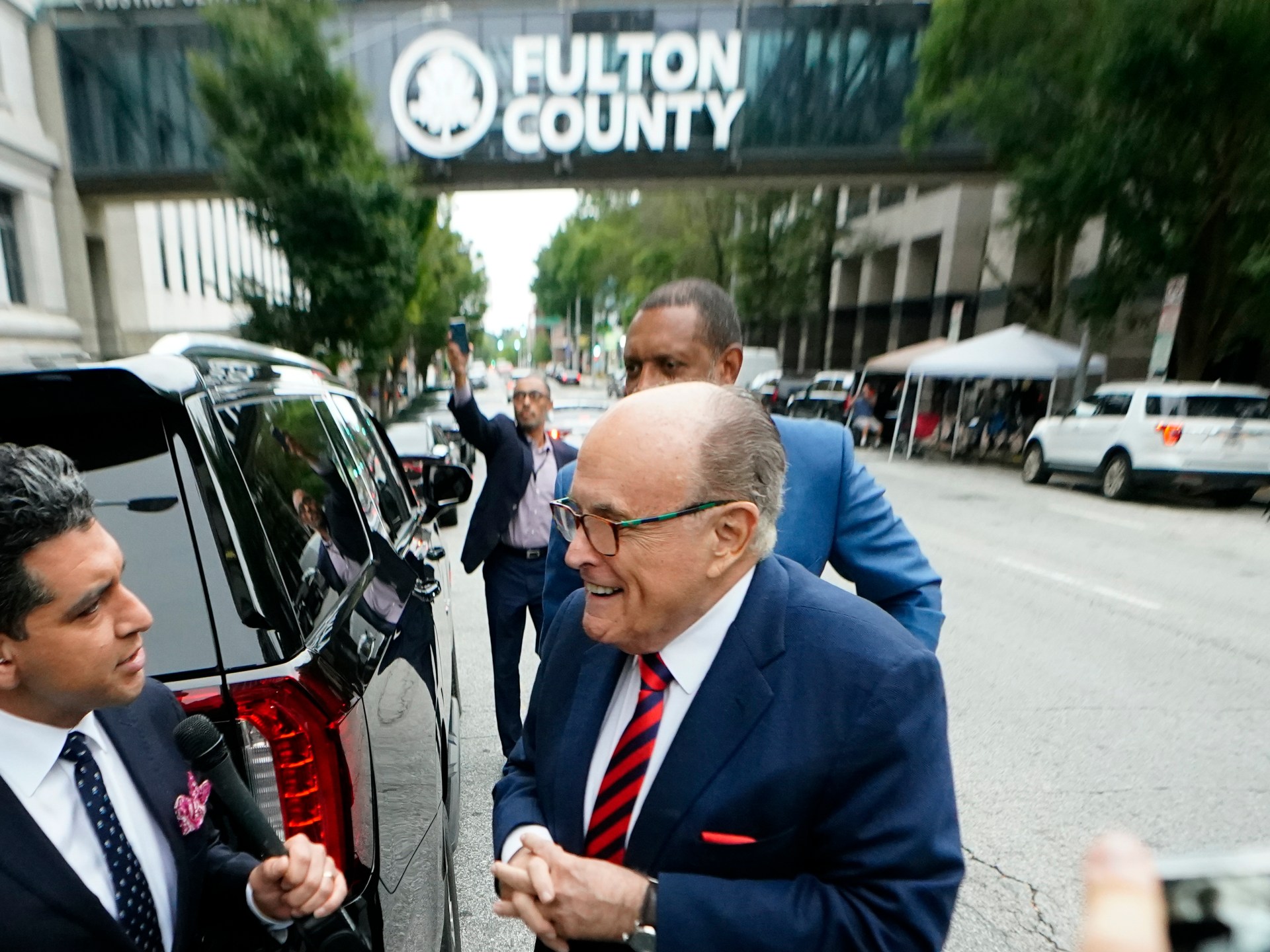 Rudy Giuliani arrived at an Atlanta courthouse Wednesday under a judge’s order to appear before a special grand jury that is investigating attempts by former US President Donald Trump and others to overturn his 2020 election defeat in Georgia.

News cameras swarmed Giuliani as he stepped out of a limousine Wednesday morning with his attorney, Robert Costello, and walked up the steps into the Fulton County courthouse. Giuliani told reporters that he wouldn’t talk about his testimony.

“Grand juries, as I recall, are secret,” Giuliani told reporters. “They ask the questions and we’ll see.”

It is unclear how much the former New York mayor and attorney for Trump will be willing to say now that his lawyers have been informed he’s a targRobert Costelloet of the investigation. Questioning will take place behind closed doors because the special grand jury proceedings are secret.

Yet Giuliani’s appearance is another high-profile step in a rapidly escalating investigation that has ensnared several Trump allies and brought heightened scrutiny to the desperate and ultimately failed efforts to overturn Democrat Joe Biden’s 2020 presidential election win.

It’s one of several investigations into Trump’s actions in office as he lays the groundwork for another run at the White House in 2024.
Fulton County District Attorney Fani Willis opened her investigation after the disclosure of a remarkable January 2, 2021, phone call between Trump and Georgia Secretary of State Brad Raffensperger.

On the call, Trump suggested that Raffensperger could “find” the exact number of votes that would be needed to flip the election results in Georgia.

Trump has denied any wrongdoing. He has described the call as “perfect”.

She has also said she is considering calling Trump himself to testify, and the former president has hired a legal team in Atlanta that includes a prominent criminal defence attorney.

In seeking Giuliani’s testimony, Willis noted that he was both a personal attorney for Trump and a lead attorney for his 2020 campaign.

She recalled in a petition how Giuliani and others appeared at a state Senate committee meeting in late 2020 and presented a video that Giuliani said showed election workers producing “suitcases” of unlawful ballots from unknown sources, outside the view of election poll watchers.

The claims of fraud were debunked by Georgia election officials within 24 hours. Yet Giuliani continued to make statements to the public and in subsequent legislative hearings claiming widespread election fraud using the debunked video, Willis noted in her filing.

Two of the election workers seen in the video, Ruby Freeman and Wandrea “Shaye” Moss, said they faced relentless harassment online and in person after the video was shown at the December 3, 2020 Georgia legislative hearing in which Giuliani appeared. At another hearing a week later, Giuliani said the footage showed the women “surreptitiously passing around USB ports as if they are vials of heroin or cocaine.”

They actually were passing a piece of candy, the women revealed at a public committee hearing on the investigation into the January 6, 2021 riot at the US Capitol.

Willis wrote in the court filing that Giuliani’s hearing appearance and testimony were “part of a multi-state, coordinated plan by the Trump Campaign to influence the results of the November 2020 election in Georgia and elsewhere”.

Willis also wrote in a petition seeking the testimony of attorney Kenneth Chesebro that he worked with Giuliani to coordinate and carry out a plan to have Georgia Republicans serve as fake electors. Those 16 people signed a certificate declaring falsely that Trump had won the 2020 presidential election and declaring themselves the state’s “duly elected and qualified” electors even though Biden had won the state and a slate of Democratic electors was certified.

Giuliani’s attorneys tried to delay his appearance before the special grand jury, saying he was unable to fly due to heart stent surgery in early July.

But Fulton County Superior Court Judge Robert McBurney, who is overseeing the special grand jury, said during a hearing last week that Giuliani needed to be in Atlanta on Wednesday and could travel by bus, car or train if necessary.

Asked how he made the trip, Giuliani told reporters: “I’ll give you one answer: I didn’t walk.”

Other Trump allies have also been swept up in the probe. Senator Lindsey Graham, a South Carolina Republican, received a subpoena ordering him to appear for testimony on August 23. Graham has challenged that subpoena, citing his protections as a member of Congress. A judge on Monday rejected that argument and said he must testify. Graham has said he’ll appeal.

Willis has indicated she is interested in calls between Graham and Raffensperger about the results in Georgia in the weeks after the election.