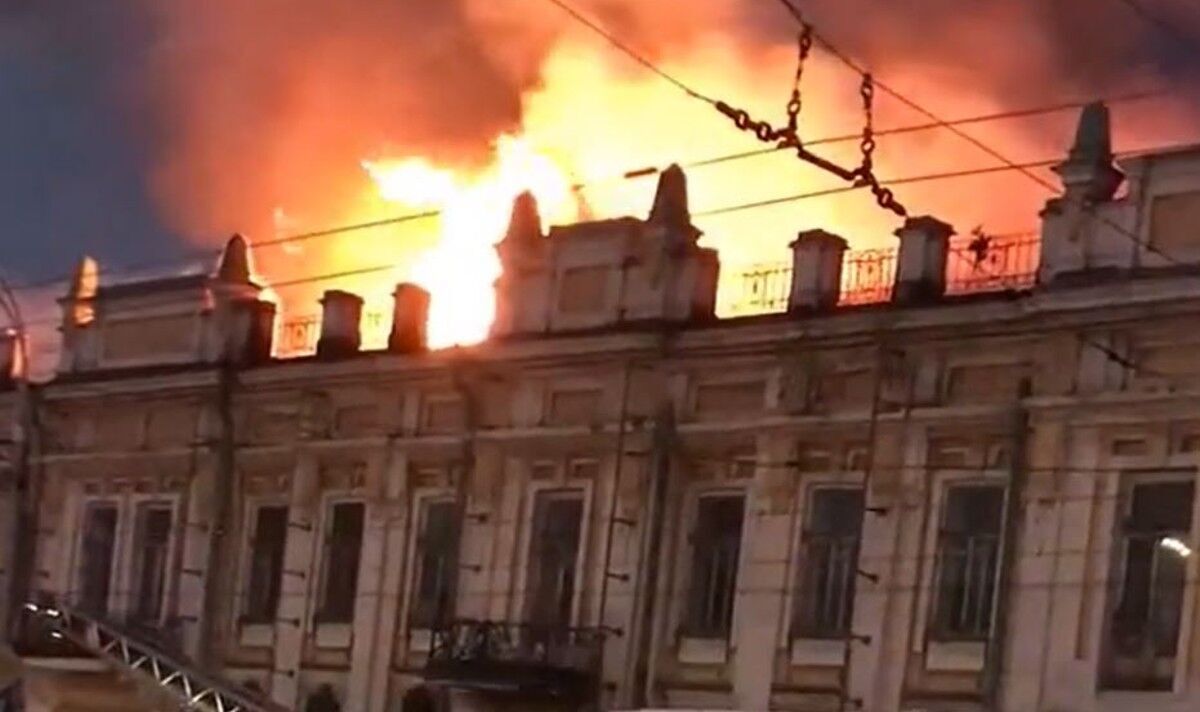 Footage on social media shows flames and smoke billowing over a building with reports a cultural heritage building in Irkutsk is ablaze. Twitter user Tim White tweeted video on Friday showing fire at a building, commenting: “Another fire in Russia, and this one may be suspicious. Authorities have so far not given a reason for this blaze at an empty, but cultural heritage building in Irkutsk. It’s next to a theatre in the city.”

Further video footage shows a ladder rising from a fire engine to the top of the building and fire crews climbing towards the flames while another clip shows smoke pouring from an area which appears to be behind the historic venue.

NEXTA media tweeted at 2.40pm on Friday: “A historic building is on fire in the center of Irkutsk, Russia.”

A video clip shared by the Belarusian outlet shows a crowd of onlookers forming in front of the scene as thick, brown smoke pours from behind the building’s facade.

Unconfirmed reports of the blaze drew comment from Twitter users with one stating: “Friday 13 is not Russias lucky day …”

Irkutsk is one of the largest cities in Siberia and forms the centre of the Irkutsk region.

It is recognised as an administrative and cultural hub for Eastern Siberia and of Russia’s Far East.

Twitter user @1917CCCP2 shared footage and in a translated comment stated: “Russia Irkutsk in the centre. A fire broke out in Vampilov Irkutsk Regional Theatre.

“The fire, which started in the two-storey building behind the old Tyuza building on Krasnoarmeyskaya Street, is being dealt with by 3 technical cars and 12 personnel.”

Another clip reportedly from Russian TV channel Moscow 24 was posted on YouTube by Наша паРаша, which translates to Our Russia.

In the video, filmed on the same street as Ukraine War SitRep’s clip, fire engulfs a number of cars as people look on.

Twitter user @igorsushko also posted a clip of the fire from news agency Mash, claiming “seven cars burned down to a crisp in Moscow”.

An ammunition depot in the Belgorod region was reportedly set ablaze in the same month.

Suspected attacks emanating from Ukraine were also reported in the Voronezh and Kursk regions.

In Kursk, there were unconfirmed reports that Russian air defences had downed Ukrainian military drones.

Explosions were also heard in the cities of Kursk and Oboyan.

Video released by Ukraine’s military on Friday showed Ukrainian forces destroyed parts of a Russian armoured column as it tried to cross a river in the Donbas region.

It came as Moscow appeared to be refocusing its assault in the east of Ukraine after a new pushback by Kyiv.

Ukraine has driven Russian troops away from the second-largest city of Kharkiv in the fastest advance since Kremlin forces pulled away from Kyiv and the northeast more than a month ago. Moscow is, however, still bombarding villages north of Kharkiv.

The city, which had been under fierce bombardment, has been quiet for at least two weeks.

Some six miles north of the city, firefighters doused smouldering wreckage in Dergachi after what officials said was an overnight Russian missile attack on the House of Culture, which was being used to distribute aid. Volunteers inside were trying to salvage packages of baby diapers and formula.

Mayor Vyacheslav Zadorenko said: “I can’t call it anything but a terrorist act. They wanted to hit the base where we store provisions and create a humanitarian catastrophe.”