Skip to content
HomeNewsRussia, Ukraine near to grain deal as heavy shelling continues 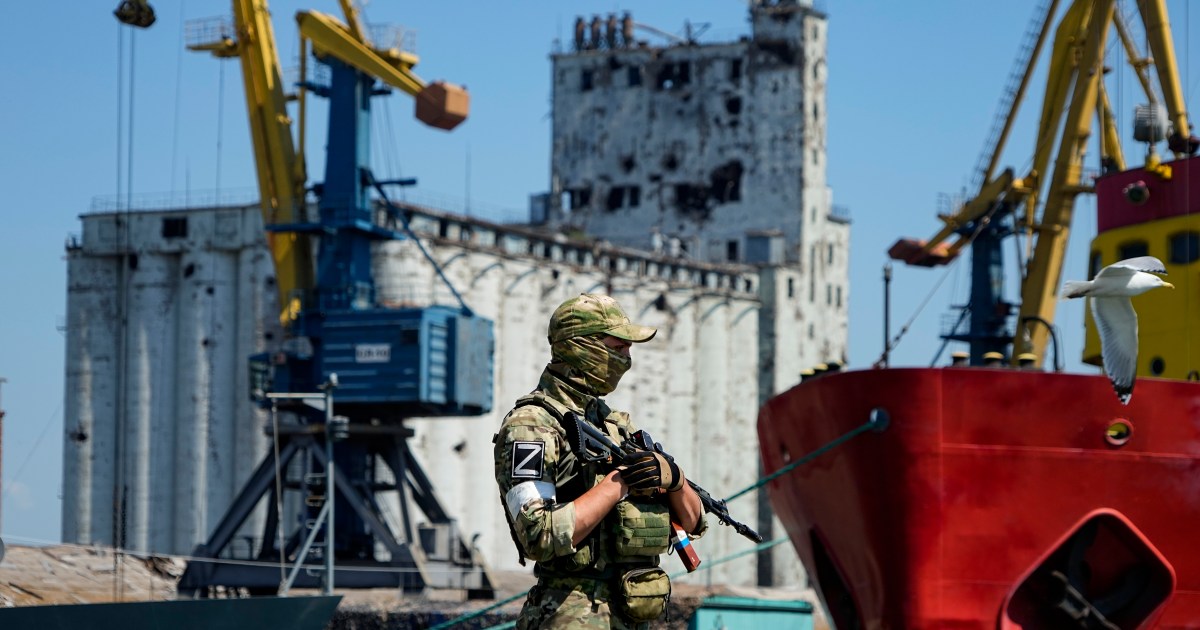 More than 20 million tonnes of grain is stuck at Odesa port and unblocking exports could relieve a global food crisis.

Russia and Ukraine made substantive progress in their first direct talks since March on a deal to relieve a global food crisis caused by the blockading of grain exports from Ukraine’s Black Sea ports, but an end to the war remained far off as heavy shelling continued in the east of the country.

UN Secretary-General Antonio Guterres said after the meeting that the talks on allowing grain exports had provided a “ray of hope to ease human suffering and alleviate hunger around the world”, but he also cautioned that while he was optimistic, a deal was “not yet fully done”.

Asked about the possibility of talks on peace, Guterres warned there was still “a long way to go” before there would be peace talks to end the war.

Sustained Russian shelling across Donetsk province continued on Wednesday. Moscow aims to capture the province to complete its seizure of the industrialised Donbas region of eastern Ukraine.

Russian state news agency TASS quoted a separatist official as saying Russian and proxy forces had now entered the town of Siversk in Donetsk and could take it in a couple of days. Ukraine’s armed forces said that Siversk had been fired on by artillery but Russian forces had not conducted a ground assault.

Turkey’s defence minister was upbeat about the grain talks, signalling that a final agreement on exports could be announced next week.

“At this meeting, which we will hold next week, all the details will be reviewed once again and the work we have done will be signed,” Defence Minister Hulusi Akar said in a statement.

NATO member Turkey has been using its good relations with both the Kremlin and Kyiv to try to broker an agreement on a safe way to deliver the grain.

Turkey would also set up a coordination centre with Ukraine, Russia and the UN for grain exports, he said.

There was no immediate comment from Ukraine or Russia.

The stakes could not be higher for tens of millions of people facing the threat of starvation in poor nations because of the war engulfing Ukraine – one of the world’s main grain-producing regions.

Shipments from Ukraine’s Black Sea ports are blocked both by Russian warships and mines Kyiv has laid at sea to avert a feared amphibious assault by Moscow.

The two sides had entered the talks saying that a deal was close but some contentious issues remained.

Russia said on Tuesday that its requirements included the right to “search the ships to avoid the contraband of weapons” – a demand that was rejected by Kyiv.

Kyiv has asked that a friendly country such as Turkey accompany its ships along safe “grain corridors” that would avoid known locations of Black Sea mines.

Experts say de-mining the Black Sea is a complex operation that could take months – too long to address the growing global food crisis.

Turkey says it has 20 merchant ships waiting in the region that could be quickly loaded and sent to world markets.

The negotiations are also complicated by growing suspicions that Russia is trying to export grain it has stolen from Ukrainian farmers in regions under its control.

Russian authorities in Ukraine’s southern region of Kherson on Wednesday countered with accusations that Kyiv’s forces were deliberately burning crops and mining fields.

Ukraine and the West have accused Russia of exacerbating a global food crisis and increasing inflation by complicating attempts to supply poorer nations with grain.

Moscow has blamed Ukraine, accusing it of refusing to remove mines that it scattered around its coastline to protect itself from Russia’s attack and that represent a threat to shipping.

Russia has also lashed out at the West for imposing sanctions on a range of sectors that make it harder for Russia to fund and insure its own maritime freight services.

Alongside being a vital exporter of wheat and grains such as barley and maize to the world market, Ukraine had also supplied nearly half of all the sunflower oil traded on global markets prior to the Russian invasion.