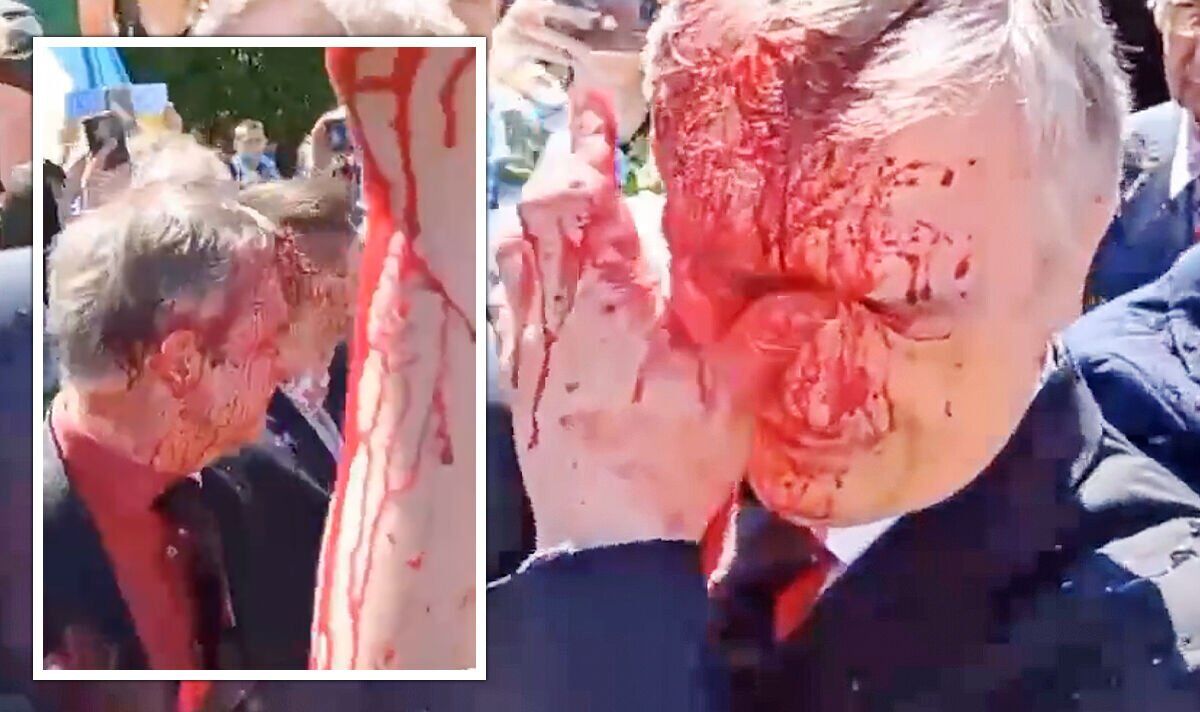 The Russian diplomat was left literally red-faced as anti-war demonstrators doused him with red paint during his visit to the memorial. Sergey Andreyev was paying tribute to fallen Soviet soldiers to mark Victory Day, a commemoration believed to be ideologically pivotal for Vladimir Putin. Footage of the incident showed Andreyev trying to maintain his composure despite dripping in paint and protesters screaming at him over Russia’s invasion of Ukraine.

His security guards and a couple of reporters covering the event also appeared to have been caught up in the paint attack.

The Russian Ambassador could be seen trying to wipe some of the paint out of his right eye as a woman deposited a pair of underwear on his shoulder.

Andreyev spared a quick glance to the undergarment before someone off-screen removed it.

Protestors could be seen holding Ukrainian flags and placards painted blue and yellow as they chanted “fascists” at the ambassador.

Poland has been at the forefront of helping Ukraine, welcoming millions of escaping residents trying to flee Russian bombings.

During his own speech at the Victory Day parade in Moscow, Vladimir Putin said troops are fighting for their country.

The Russian leader said his “special military operation” was a purely defensive and unavoidable measure against plans for a NATO-backed invasion of lands he said were historically Russia’s, including Crimea.

Speaking in his latest daily update, President Zelensky said: “As a result of a Russian strike on Bilohorivka in the Luhansk region, about 60 people were killed, civilians, who simply hid at the school, sheltering from shelling.”

The governor of Ukraine’s eastern Luhansk region Serhiy Gaidai said an estimated 90 people had been sheltering inside the school.

Moscow has continued to maintain they do not target civilians and has distanced itself from several attacks conducted on civilian infrastructures over the past 10 months.

Mr Gaidai said three more civilians had been killed in Kharkiv and three in the Luhansk region, where he said Russian forces were trying to cut off a route to safety known as the Road of Life. It was not immediately possible to verify the reports.