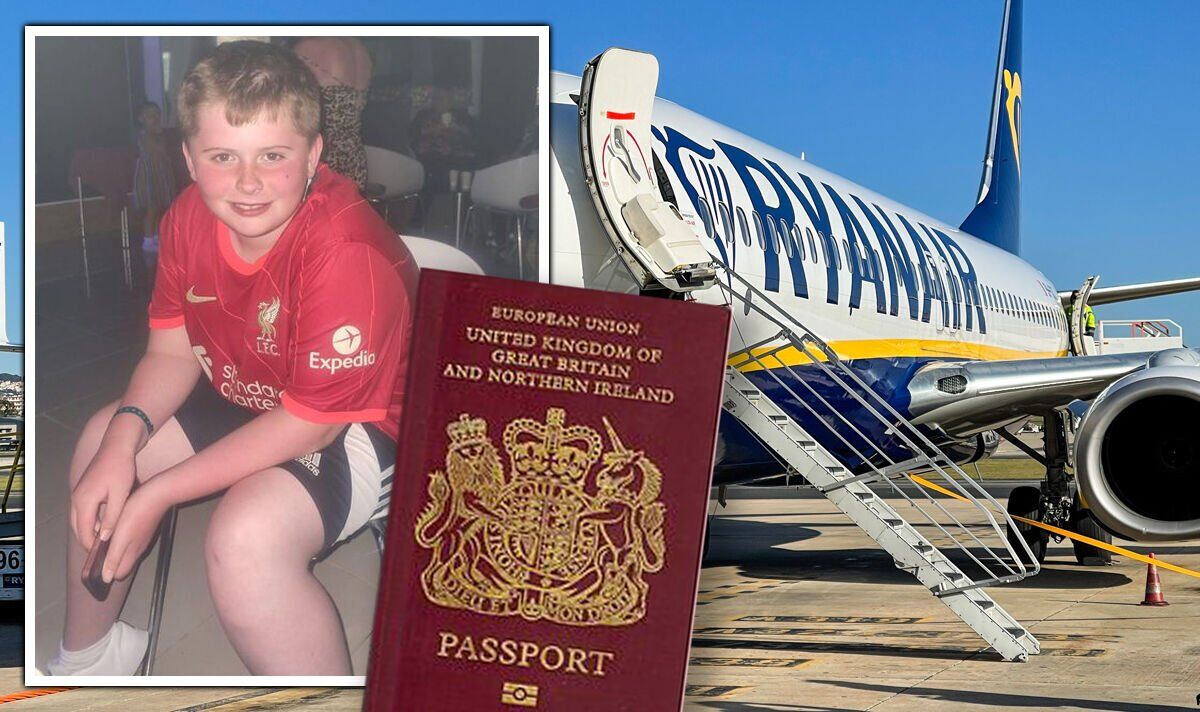 Distraught Ryley McGuckin, 11, cried and apologised to his seven-year-old brother Barry after check-in staff at Prestwick Airport in Glasgow told the family his passport had expired and didn’t comply with strict post-Brexit travel rules. UK passports must not be less than 10 years old and have at least three months’ validity left on the passenger’s return date for anyone wishing to enter the European Union. Ryan’s travel document was issued in March 2017 and expires in September 2022, meaning it is still valid for use until the end of June.

But his mum Natasha Rae was left gobsmacked after Ryanair told her his passport was more than five years old, rendering it invalid in the EU.

She told Scottish newspaper The Daily Record: “We arrived at the airport on Monday at 4am to check-in for the flight at 6am and the person at the desk said they had to phone ‘Ryanair immigration’.

“After they got off the phone they said we weren’t able to fly because his passport was invalid and that it was against the law.

“We were absolutely devastated. Both of my sons were crying.

“Barry wasn’t old enough to understand and was absolutely distraught.

“Ryley was devastated because he thought it was all his fault we couldn’t go on holiday and he was apologising to his wee brother.”

The furious mum had read horror stories of families being turned away from European flights as a result of the post-Brexit rules, so had been careful in preparing for the family’s holiday.

Before they left for their holiday, she checked her own, partner Chris Bell and her two sons’ travel documents with the Passport Office and the FCD.

“This is our first big family holiday since before the pandemic, and we were so excited.

“Ryanair has just made up its own rules. I will never fly with them again, ever.”

The Civil Aviation Authority (CAA) has made clear anyone who is denied boarding with “no reasonable grounds” to do so is entitled to compensation.

This should first be sought from the airline first, followed by an alternative dispute resolution scheme (ADR) if the carrier does not resolve the initial complaint.

Ryanair has admitted its mistake with Ryan’s passport and has sincerely apologised, confirming the family had been given a full refund for the unused flight and given them a travel voucher for £315.

The airline said in a statement: “Our Immigration Dept. have now clarified this case with the EU Commission and we now accept that our handling agents at Glasgow Prestwick Airport wrongly believes that this child’s passport was not valid for travel as they wrongly believed that a child’s passport must be no more than 5 years old on the date of travel.

“Whereas in fact, all UK nationals travelling to the EU, regardless of age, must meet the same entry requirements for travel to the EU, which are:

“1. Passports must be issued within 10 years of the date of arrival into the EU.

“2. The passport must be valid for at least three months from the return date of travel from the EU, unless the passenger has a Schengen issued Residence Permit or a Schengen long term visa.

“In light of this clear error on our part, we have written to his family and given them a full refund of GBP £313.79 cost of their unused flights and as a gesture of goodwill we have also given them a travel voucher for another £315 which we hope they will use to book more Ryanair flights for the family in the very near future.

“We apologise sincerely for the error we made in this case and we have updated our briefing notes to all our airport handling agents to ensure this error does not recur.”