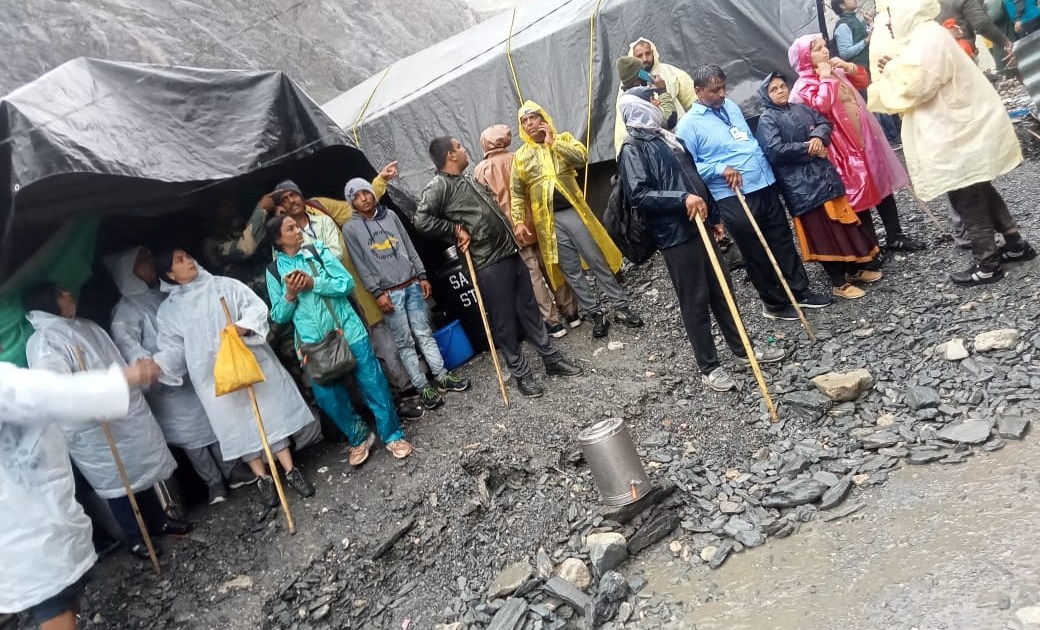 Around 10,000 people were camped near the remote Amarnath temple when a sudden cloudburst triggered a deluge.

At least 16 people have been killed and dozens missing after sudden rains triggered flash floods during an annual Hindu pilgrimage to the Amarnath cave shrine in India-administered Kashmir, officials said.

The cloudburst on Friday near the mountain cave revered by Hindus sent a wall of water down a gorge and swept away about two dozen camps and two makeshift kitchens, officials said.

An estimated 10,000 people were camped in the mountains when the rains struck. The region’s disaster management department said emergency workers were searching for several missing people.

“We found 16 bodies so far and at least 40 are missing,” an official from the state disaster response agency said.

“Security forces and all the rescue teams are looking for the missing and injured,” the official said on condition of anonymity, as he was not authorised to speak to media.

India’s Prime Minister Narendra Modi gave his condolences in a post on Twitter, saying he was “anguished” by the incident.

Anguished by the cloud burst near Shree Amarnath cave. Condolences to the bereaved families. Spoke to @manojsinha_ Ji and took stock of the situation. Rescue and relief operations are underway. All possible assistance is being provided to the affected.

The Amarnath pilgrimage began on June 30 and tens of thousands of pilgrims have already visited the cave shrine where Hindus worship Lingam, a naturally formed ice stalagmite, as an incarnation of Shiva, the Hindu god of destruction and regeneration.

Hundreds of thousands of Hindus from across India take part in the pilgrimage, which lasts up to 45 days.

Authorities expected about a million people to take part in the pilgrimage, at 3,900 metres (12,800 feet) during the coming 43 days. The procession did not take place for two years amid the coronavirus pandemic.

Worshippers trek to the cave along two routes through forested mountain passes with a view of snowy peaks: a traditional one via the southern hill resort of Pahalgam that takes three days, or a one-day trip through northeastern Baltal. Some also use helicopter services to pay quick visits.

Hundreds of pilgrims have died in the past due to exhaustion and exposure to harsh weather during the journey through the icy mountains. In 1996, thousands of people were caught in a freak snowstorm during their trek, leading to more than 250 fatalities.

The pilgrimage concludes on August 11, a full-moon night that Hindus believe commemorates Shiva revealing the secret of the creation of the universe.