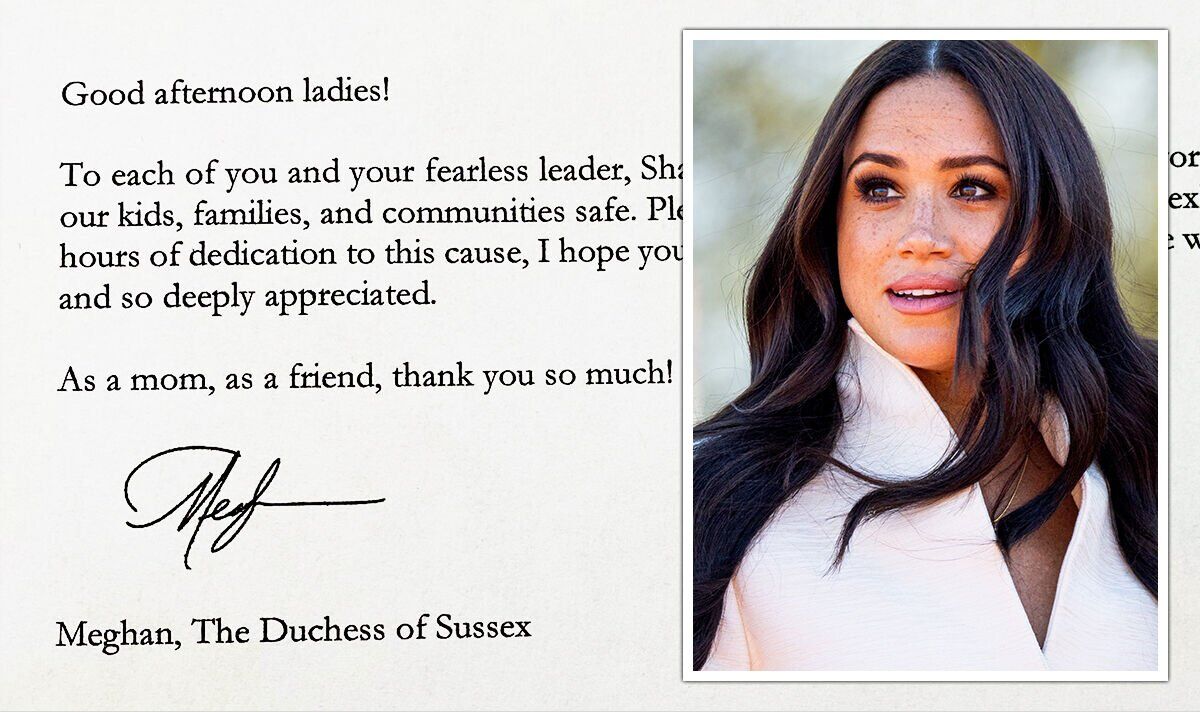 The Duchess of Sussex, who lives in California with Prince Harry and their young children, three-year-old Archie and one-year-old Lilibet, last month travelled to Texas to lay flowers at the memorial of the Uvalde school mass shooting. Her letter, in which she thanked the Moms Demand Action campaigners for their “endless hours of dedication” to fighting gun violence, is the latest show of support for change at a moment of deep division over firearms in America.

The message, addressed to Moms Demand Action founder Shannon Watts, read: “Good Afternoon Ladies! To each of you and your fearless leader Shannon, a huge thank you for the work you are doing to keep our kids, families, and communities safe.

“Please know that while you may feel exhausted by your endless hours of dedication to this cause, I hope you feel energised in knowing that the work you’re doing is vital and so deeply appreciated.

READ MORE: US gun row as British reporter told to ‘go back to your country’ by angry Republican congresswoman

Ms Watts, who shared an image of the letter on Twitter, said: “Moms Demand Action volunteers and staff have been working around the clock for weeks, so it was moving to receive such a supportive note — and snacks! — from the Duchess of Sussex today.”

Meghan’s words followed Tuesday’s agreement of a bipartisan gun control bill in the US Senate aimed at toughening up background checks for younger gun purchasers.

The new legislation would also increase penalties for gun traffickers and stop romantic partners convicted of domestic abuse who are not married to their victims from getting firearms, meaning the so-called “boyfriend loophole” would finally be closed.

Separately, on the same day, the US supreme court opened the door for almost all law-abiding Americans to carry concealed and loaded handguns in public after the conservative majority struck down a New York law that placed strict restrictions on firearms outside the home.

The ruling was a blow for those seeking reforms.

Mr Biden said: “This ruling contradicts both common sense and the constitution and should deeply trouble us all.”

While US gun control has been in the spotlight for decades, the Texas massacre sparked a public outcry for new legislation.

After an 18-year-old high school dropout shot 19 young children and two adults at Robb Elementary School in Uvalde on May 24, the Duchess of Sussex made a trip to the site.

The Duchess, 40, placed a bouquet of white roses tied with a purple ribbon at a row of crosses put up in memory of the victims.