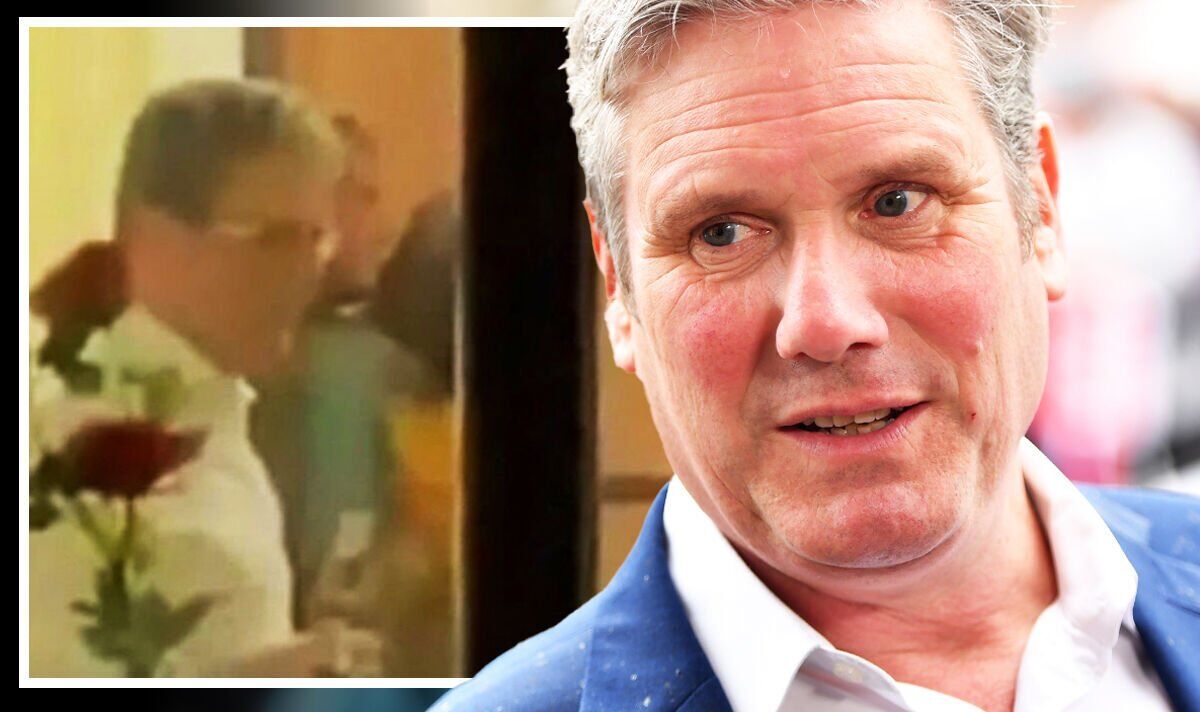 In damning findings for the Labour Party, an exclusive poll for Express.co.uk shows a significant majority of Britons believe the pair should be slapped with fixed term penalty notices. Sir Keir has for weeks demanded Prime Minister Boris Johnson resign after being handed a fine for an event in No 10 but is now coming under pressure over his own actions during the pandemic.

In April 2021 while campaigning for the Hartlepool by-election, the Labour leader was filmed drinking beer indoors with others when Covid restrictions forbade it.

It has since emerged as many as 30 people may have been at the indoor gather, including Ms Rayner, and that the group held ordered a large takeaway curry order for dinner.

The findings of a poll by TechneUK for Express.co.uk indicate the public believes the Labour leader and his deputy broke the Covid rules and should be fined.

A total of 67 percent of respondents answered “yes” when asked: “Should Keir Starmer and Angela Rayner be fined too for drinking beer and eating curry with Labour activists when Covid restrictions applied?”

The pollsters spoke to 1,635 British adults on May 4 and 5 – before it was confirmed Durham Constabulary were launching an investigation into the matter.

Sir Keir has always rejected any wrongdoing and insisted the gathering was a work event, with his team stopping for dinner during campaign preparations.

Claims of the rule breaking first emerged last year but the police said at the time they did not believe an offence had been established.

There has been renewed pressure for the force to open a formal probe after Mr Johnson was fined for an event in Downing Street.

A police statement on Friday afternoon said: “Earlier this year, Durham Constabulary carried out an assessment as to whether COVID-19 regulations had been breached at a gathering in Durham City on April 30 2021.

“At that time, it was concluded that no offence had been established and therefore no further action would be taken.

“Following the receipt of significant new information over recent days, Durham Constabulary has reviewed that position and now, following the conclusion of the pre-election period, we can confirm that an investigation into potential breaches of COVID-19 regulations relating to this gathering is now being conducted.”

Police did not elaborate on what the new information involved.

A Labour Party spokesman said: “We’re obviously happy to answer any questions there are and we remain clear that no rules were broken.”

Sir Keir declined to answer questions on the development as he visited Labour campaigners in Carlisle.

At the time of Sir Keir’s alleged rule breach, Britons could meet indoors only if it was “reasonably necessary for work”.

Guidance additionally stated: “There should not be any sharing of food and drink by staff who do not share a household.

“As far as possible, food served and/or displayed should be individually wrapped to minimise contact and avoid spread of infection.”