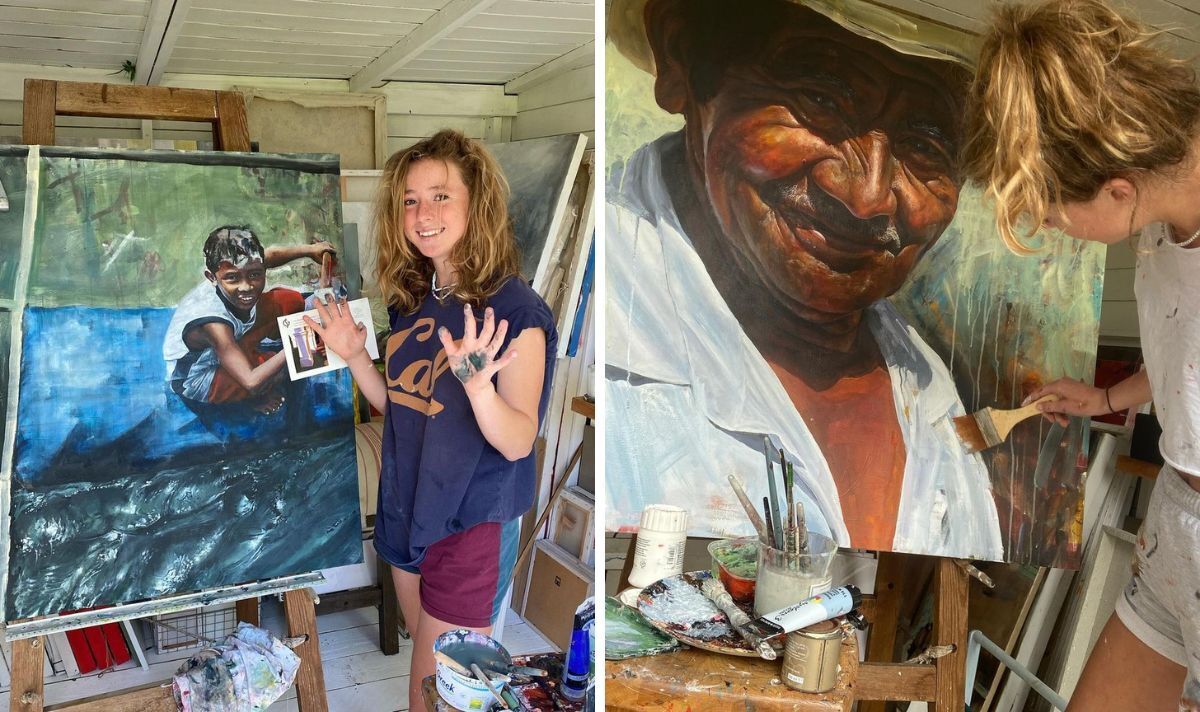 A teenager who began painting during the pandemic has been selling her paintings for £23,000 as she showcases her artwork in exhibitions across the UK. Makenzy Beard, 15, had a solo exhibition at the renowned Royal Academy of Arts in London where her work was admired by hundreds who came to visit. The Welsh schoolgirl, who also plays hockey for Wales, began painting after searching for a new hobby during the Covid pandemic in 2020.

Makenzy’s mother had also been a keen painter, meaning their home in Oxwich, Wales, was well stocked with paint brushes, canvases and paint to get the teenager going.

A garden shed was transformed into her studio and she soon began creating a wide variety of artwork.

But one particular piece brought her national attention as she spent 20 hours on the masterpiece.

The piece, titled John Tucker, was a portrait of her neighbour whom she spotted and photographed taking down hay nets on his farm, with the piece taking more than 20 hours over the space of three weeks to complete.

The teenager would use any spare time she had when she wasn’t in school to create art and spent hours in her studio.

The painting went viral after her school shared it on social media and it beat 33,000 other entrants to the Royal Academy’s young artists’ summer show to be displayed at the central London gallery.

But this wasn’t the end for Makenzy, as since then her artwork has been represented by the Blackwater Gallery in Cardiff which is currently hosting an exhibition of her work – with proceeds going to humanitarian causes in Ukraine.

Discussing the exhibition, Makenzy told the Telegraph: “I felt not out of place, it was so unusual, but I’m really excited about where it will go after this and hopefully it will be the first of many.”

Makenzy has used her exhibition to raise money for the Ukraine Humanitarian Appeal which delivers aid to thousands of people and hopes to help fund a school in Africa.

“If I’ve been given the ability to make money that I don’t necessarily need at this time, if I can put that somewhere good, that is something I really want to do,” she said.

In addition to her painting, Makenzy plays hockey for Wales, including at the European championships in Switzerland this summer.

Her mother, Hannah, said painting was “relaxation” for her daughter and that the amount of money her art sold for was irrelevant to them.

She said: “The extent to which Makenzy is painting now and where she is taking it supersedes most of us. It’s a bit unusual. Whether she had sold anything or not, she would be painting anyway. What people forget is, because of her age, the money is irrelevant to her because she can’t really spend it. She uses it as a form of relaxation.”