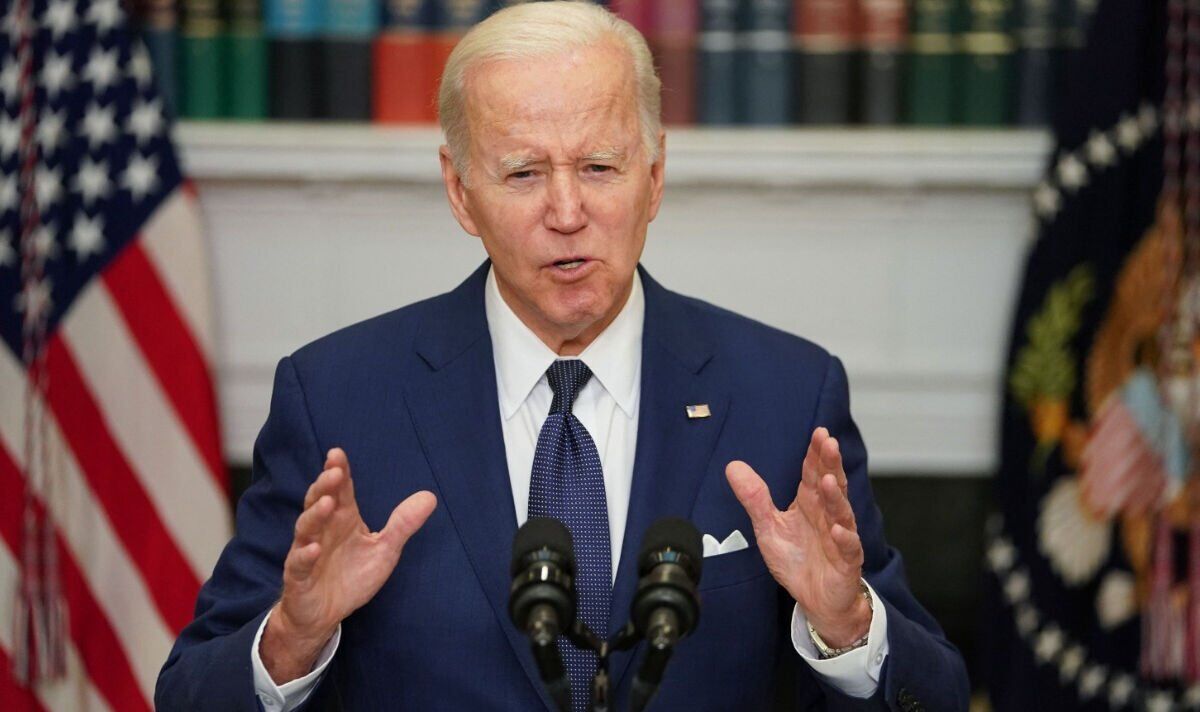 The 46th President appeared alongside his wife Jill Biden as he addressed the nation following “another massacre” in the United States. The attack took place at Robb Elementary School in Uvalde, around 80 miles west of San Antonio on Tuesday. The 18-year-old suspect is dead and was believed to have been killed by officers.

Following a return from his tour in Asia, Mr Biden said: “I’d hoped when I became President I would not have to do this again.

“And how many scores of little children who witnessed what happened see their friends die as if they’re on a battlefield, for God’s sake?”

He continued: “The idea that an 18-year-old kid can walk into a gun store and buy two assault weapons is just wrong.

“What in God’s name do you need an assault weapon for except to kill someone?

“Deer aren’t running through the forest with Kevlar vests on for God’s sake!”

Speaking from the White House’s Roosevelt Room, the POTUS added: “It is time to turn this pain to action.”

“For every parent, every citizen of this country.

“We have to make it clear to every elected official in this country: It’s time to act.

“It’s time for those who obstruct or delay or blocked the common-sense gun laws – we need to let you know that we will not forget.”

Biden has also ordered all flags at the White House and on federal grounds to fly at half-staff until sundown on May 28 in honour of the victims.

Republican Governor Greg Abbott, who received a call from Mr Biden following the attack, revealed many of the details about the incident.

He said the suspect “shot and killed horrifically and incomprehensibly” more than a dozen students and a teacher.

Mr Abbott added: “When parents drop their kids off at school, they have every expectation to know that they’re going to be able to pick their child up when that school day ends.

“And there are families who are in mourning right now.

“The state of Texas is in mourning with them for the reality that these parents are not going to be able to pick up their children.”

The incident in Texas comes just days after a mass shooting in a grocery store in New York left 10 people dead.

It also comes just under a decade since 27 people were killed at the Sandy Hook massacre in Connecticut.

Mr Biden ran to replace Donald Trump in 2020 on a ticket which pledged to push gun safety measures and reduce the country’s tens of thousands of annual gun deaths.

However, the President and his fellow Democrats have failed to get enough votes in Congress to impose new background checks for gun purchases or other proposed bills.

Mr Biden has also faced criticism from a prominent Republican following his statement about the Texas shooting.

Kellyanne Conway, who worked as senior counsellor to President Trump from 2017 to 2020, said on Twitter: “Here is the only Tweet by the President re: unspeakable tragedy & evil in Texas today; his immediate impulse as a 50-year creature of Washington is to politicise and self-aggrandize.

“Thank God decent people are thinking about the parents, the community, the surviving children.”

However, the GOP’s Texas Senator Ted Cruz did not appear to provide a political assessment when he spoke to NBC News about the “unspeakable” attack.

Mr Cruz, who ran for the Republican Presidential nomination in 2016, said: “There is nothing more evil than violent criminals who target young children, especially young children.”

He added: “The entire state of Texas, the entire country and grieving horrifically at yet another unspeakable crime.”