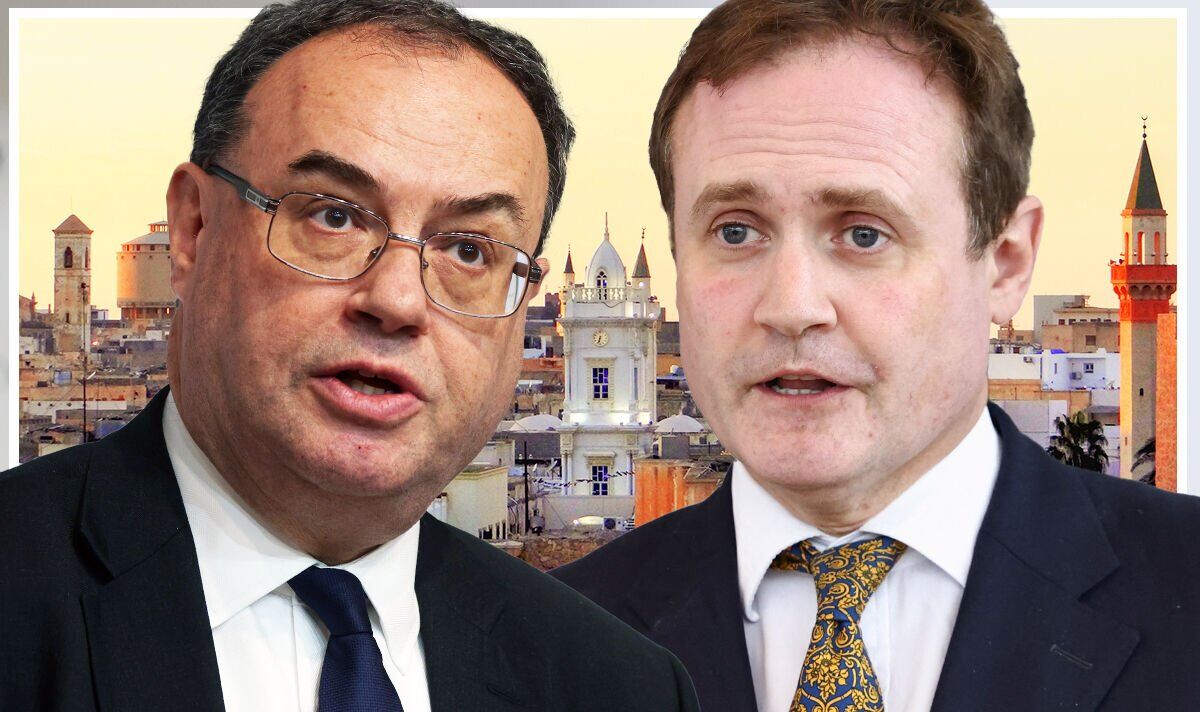 The chairman of the Foreign Affairs select Committee in Parliament and former leadership has publicly damned Mr Bailey at a time when the Governor is coming under pressure over his handling of inflation in the UK. Mr Tugendhat is a supporter of Foreign Secretary Liz Truss in the final round of the contest to replace Boris Johnson and she is said to be looking at the Bank’s mandate and it is rumoured she is being urged to appoint a new Governor.

It has emerged Mr Bailey met with Saddik Omar al-Kabir, Governor of the Central Bank of Libya (CBL), on July 1 which has been the subject of a damning report.

Mr Tugendhat blasted the meeting for “seeming to endorse the practices of a troubled organisation.”

Mr Tugendhat said: “Bailey has met with a man who has overseen an institution beset by fraud. London has been the epicentre for this enterprise for years.

“It is clear public money flows out of Libya, into London banks, and into the hands of gangsters and militias.

“To meet with a man like this is deeply unwise, it raises questions over the judgement of the Bank of England.”

The comments come off the back of a report, which lays bare the role London plays in the criminal undertakings of the CBL.

The report by Global Witness highlighted the widespread use of LCs (letters of credit), which “distributes around $9 billion worth of foreign currency to businesses and public authorities every year.”

LCs are essentially a means of exporting cash, turning Libyan dinars into dollars, euros, pounds and other currencies which can be spent overseas.  While indispensable to meeting Libya’s import needs, the LC system has long been plagued by fraud and predation by armed groups.

The report found London, home to dozens of Libyan banks, played a key role in the operation: “Global Witness set out to examine the LC money trail, which stretches from the Central Bank of Libya (CBL) to Libyan-owned banks in the heart of London.”

READ MORE: Migrant crisis could END after Libya and US diplomatic ‘breakthrough’

It noted: “A former employee of the CBL, described how meat and livestock imports were routinely manipulated. Importers would either falsify customs declarations by documenting more meat than was actually shipped or import animals weighing less than the legal minimum.

“The original exporter invoices could be altered by inserting a shell company middleman in the deal. Either way the Libyan public foots the bill, handing out more foreign currency than the imported meat is worth.

“Several Global Witness sources believed these arrangements facilitated accumulation of funds overseas to provide financing for other purposes, such as import of goods not currently covered by the LC regime, reinvestment in Libya’s parallel FX markets, or even procurement of weapons or other logistical support for the combatants fighting the civil war.”

Mr Kabir announced the meeting between the governors was part of Libya’s plans to achieve the “highest rates of transparency.”

“For his part, the Governor of the Bank of England praised the effective role played by the Central Bank of Libya and its governor in achieving financial sustainability in light of the circumstances Libya is going through.”

The Bank of England declined to comment on the meeting.

However, a Bank source said that the meeting was part of the work to help “bring Libya back together” as a functioning democracy after recent divisions and noted that Mr Bailey has meetings with many central bank governors.