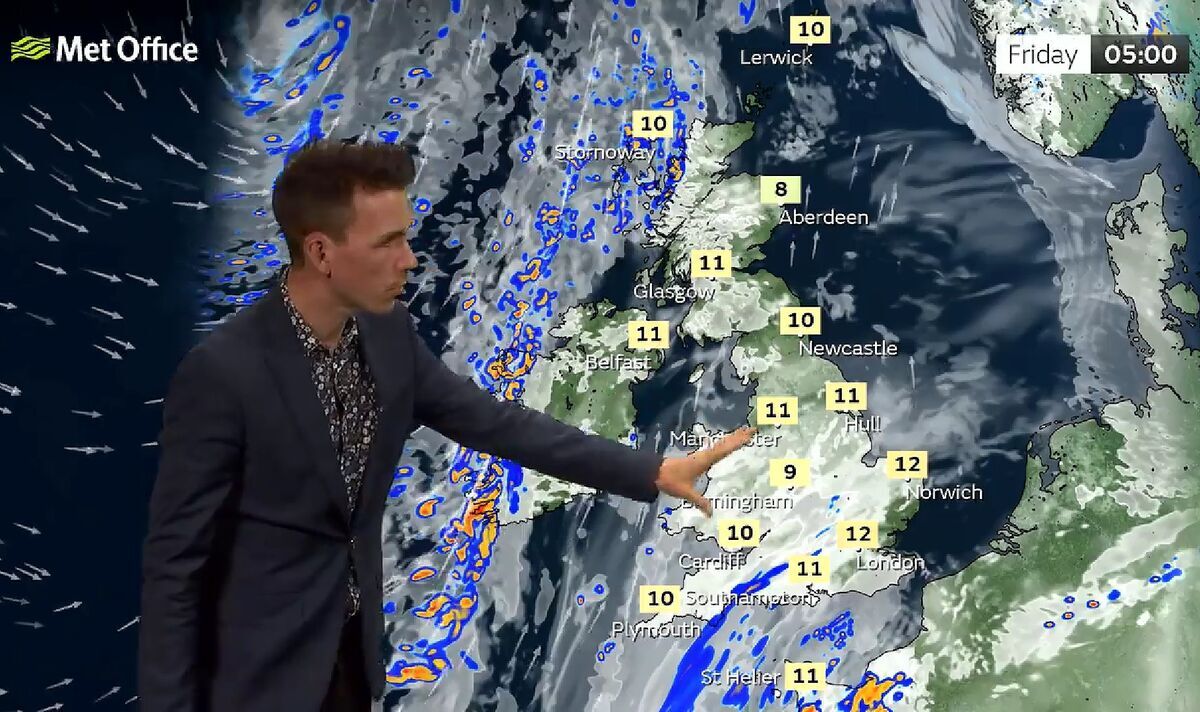 The UK’s national metrological service has forecast that temperatures will drop to 16 or 17C across most of the country, with a high of 19C in London. Met Office meteorologist Aidan McGivern said that although rain would be light for the most part on Friday, there would be “longer spells” of rain in Scotland.

He said: “Breezy here, lighter winds elsewhere and the cloud thickens from the south as the night goes on.

“Eleven or 12C the overnight low in the south 8 or 9 in the places further north.

“Now we’re going to see these weather fronts take over during Friday.

“They’ll bring showery rain but ahead of them another plume of fairly unstable weather across the continent.

“And just like a night or two ago, we’re going to see some very heavy rain affecting the continent with some lively thunderstorms.

“But we’re just on the northern extent of that.

“And it’s most likely to be light rain for the most part, but could see some heavier bursts towards the south east depending on how close the thunderstorms get.

“The real thundery activity though [is] largely staying away and then further showers push on for the rest of the UK.

He said: “A bright start for Saturday, plenty of sunshine for central and eastern parts of the UK.

“The cloud quite quickly builds and fills and by the afternoon, many places will see a mixture of bright spells, cloudy conditions and some sun poking through.

“The cloud could give one or two showers for say parts of Wales, the south and the Midlands.

“But most of the showery activity once again western parts of Scotland, where it will be pretty cloudy through the day.

“Temperatures up to 21 degrees in London, but most of the other places 15 to 17 degrees.

“And then we start off Sunday with outbreaks of rain crossing the north, turning to showers, and they’ll be further sunny spells in between these showers.”