The United States unemployment rate is at a 50-year low of 3.5 percent, data showed on Friday.

US employers added more than double the number of jobs forecast, illustrating rock-solid labor demand that tempers recession fears and suggests the Federal Reserve will press on with steep interest-rate hikes to thwart inflation.

Nonfarm payrolls jumped 528,000 in July, a broad advance that beat all estimates and was the largest in five months, Labor Department data showed Friday. Employment in the prior month was revised up to a 398,000 gain. The unemployment rate fell to 3.5%, matching a five-decade low. Wage growth accelerated and the labor force participation rate eased. 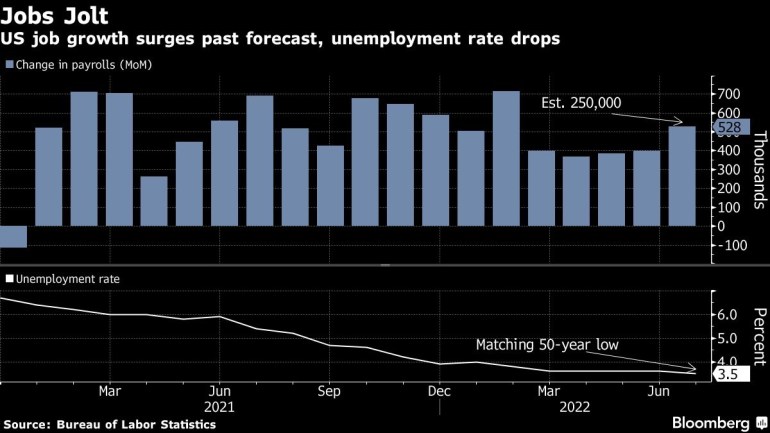 The median estimates in a Bloomberg survey of economists called for a 250,000 payrolls gain and for the jobless rate to hold at 3.6%. Treasury yields surged, S&P 500 index futures plunged and the dollar rose sharply.

The report suggests a voracious appetite for workers, particularly in the service sector that’s been struggling with labor shortages. The gain in payrolls was broad, led by increases in accommodation and food services, health care and professional and business services.

The July payrolls data gives Fed officials reason to continue their aggressive monetary policy approach against a backdrop of decades-high inflation. Chair Jerome Powell last week held open the possibility that officials could raise rates by 75 basis points for a third time at their next meeting in September, depending on inflation and economic data between now and then.

The figures are welcome news for President Joe Biden, whose approval ratings have been weak ahead of midterm elections.

Average hourly earnings also surprised to the upside, rising 0.5% in July after an upwardly revised 0.4% gain in the prior month. From a year earlier, earnings advanced 5.2% for a second month. An elevated pace of earnings growth suggests inflationary pressures will persist, a concern for Fed policy makers.

“Certainly 75 basis points will be on the table for the for the next meeting,” Randall Kroszner, an economics professor at the University of Chicago Booth School of Business and a former governor at the central bank, said on Bloomberg Television. “The thing is not only the strength of the labor market, but it is also the significant increase in wages higher than expected upward revisions.”

The labor force participation rate — the share of the population that is working or looking for work — fell to 62.1%, the lowest this year and driven by a sharp drop among teenagers. The rate for workers ages 25-54, however, ticked higher.